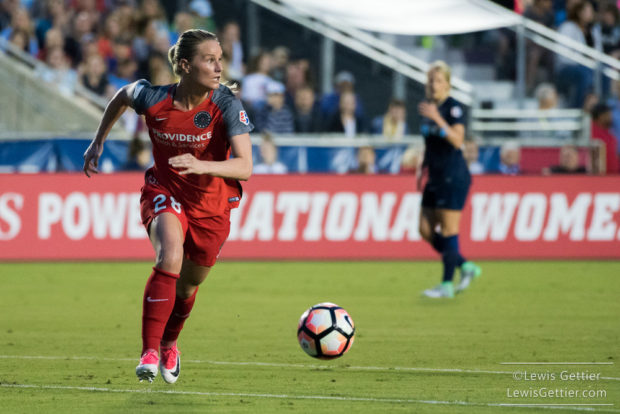 Portland got off to the best possible start in their rematch against Boston, and the Breakers never came back from it.

Emilie Haavi started in her debut for the Breakers after missing the beginning of the season with a broken jaw, while Allie Long returned for Portland after sitting out last week.

The Thorns took the lead in the very first minute after Hayley Raso earned a corner immediately after kickoff. Nadia Nadim sent it far post, where Lindsey Horan sent in a decisive header that deflected off Julie King and bounced into the net for an own goal.

1' Own goal by Julie King of the @BostonBreakers gives the @ThornsFC the early 1-0 lead. #PORvBOS pic.twitter.com/FBgdwWGkJf

Just four minutes later, they doubled their lead when Amandine Henry drove up the middle of the pitch and fired a low ball from outside the box past a diving Abby Smith. This was Henry’s first NWSL goal in her second season of play.

5' @amandinehenry6 scores her first-ever #NWSL goal with a left-footed shot from outside the box to put the @ThornsFC up 2-0. #PORvBOS pic.twitter.com/bjudruN1on

Christine Sinclair nearly added another to the Thorns’ tally in the 17th minute when Celeste Boureille delivered a perfectly placed ball over the top. Sinclair and Raso had a step on the Breakers defenders, and Sinclair collected the ball without breaking stride, dribbled forward, and tried to slot it far post, going just wide.

Sinclair tried her luck again in the 32nd minute, attempting to head in a ball first from a Nadim cross and then on the rebound, but Smith denied her both times. Henry nearly doubled her tally just a few minutes later with a rocket from distance that went just over the crossbar.

The game bogged down in the second half and turned chippy as both teams probed for a goal but did just enough to frustrate the other. Emily Sonnett came up big with two key blocks to keep the Breakers off the scoreboard.

In the 52nd minute, Rose Lavelle received the ball from Natasha Dowie on the left side of the box, but as she prepared to shoot, Sonnett went to ground, deflecting the ball over the endline.

As the game neared its end, Midge Purce intercepted the ball off a poor pass from Boureille, but again as she wound up to shoot, Sonnett was there.

In stoppage time, Allysha Chapman received a straight red card for a late tackle from behind on Raso. She will be suspended for Boston’s next game when they travel to Orlando, while Portland takes the momentum from their 2-0 victory into next week as they visit Sky Blue.