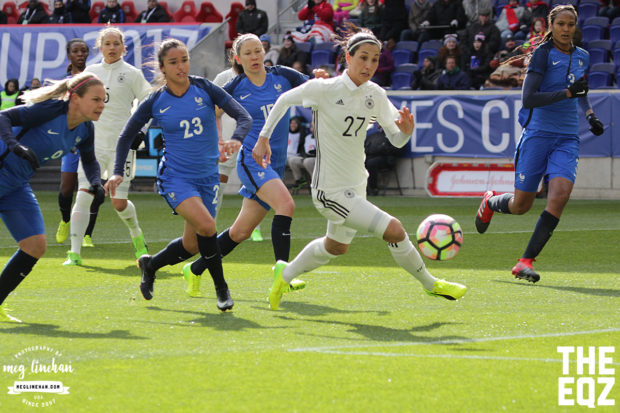 Germany battles France during SheBelieves Cup play earlier this year. France won the tournament, but Germany are favored to repeat at the Euro’s (MEG LINEHAN/Equalizer Soccer)

This summer the world’s football fans will turn their attention the Euro 2017 tournament, with Europe’s best female players to descend on the Netherlands for a three-week showcase. With the senior men’s game ready to take a break over the next few months, there is opportunity at the tournament for the women’s equivalent to boost appeal.

One of the most exciting aspects of the Euro 2017 competition is its unpredictability, with a number of teams potentially able to win the crown. This makes the odds for punters gambling on the tournament longer and more appealing, with the best deals here.

Germany are the undoubted favorites to become European champions and they go to the Netherlands to defend the title they won for a sixth straight time back in 2013. Steffi Jones’ side are No. 1 in the FIFA rankings having recently overtaken reigning world champions United States, with quality throughout the side.

Germany are at odds of 4/9 to record glory in the Netherlands, with cautious gamblers surely putting their money on the favorites.

France are a team full of flair, experience and skill – and should not be written off. Les Bleues are ranked third in the world standings and have shown over time that they can beat anyone on their day. With France set to host the World Cup in 201, a strong performance in the Netherlands would be an ideal way to continue the evolution of the national team.

Olivier Echouafni’s side are available at odds of 4/1 to win Euro 2017 and are one of the main threats.

The Scandinavian nations are traditionally some of the most competitive sides in the women’s international game and are capable of causing an upset. Norway were beaten by Germany in the final four years ago and remain a team capable of excelling – the bookmakers have them at long odds of 15/1 to go one step better this time round. Sweden are the competition’s third favorites at 9/1 but face Germany in Group B, while Denmark are 28/1 outsiders.

England are a team that have plenty of stars in their side but the Three Lionesses must overcome a competition mentality weakness if they are to pay out bets at 10/1 of tournament glory. Mark Sampson’s women face age-old enemy Scotland in Group D but will need to be at their best when the superior sides await in the knockout rounds if they are to stand a chance.

With three weeks of action in seven host cities, Euro 2017 promises to be a spectacle of women’s football this summer.