Courage remain on top after 2-0 defeat of Sky Blue 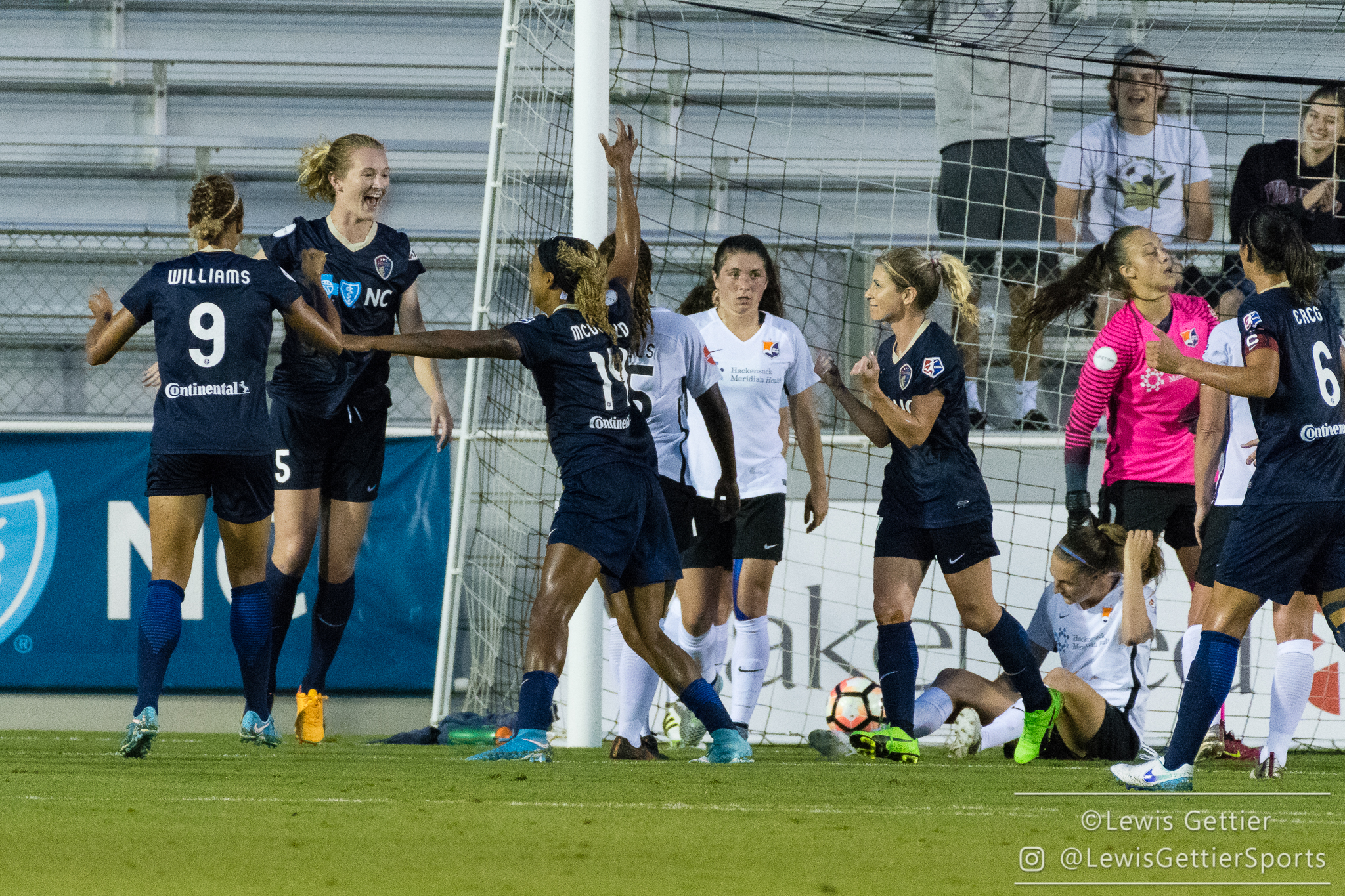 Going into tonight’s match, the Courage sat atop the current NWSL standings, leading second-ranked Sky Blue by two points. However, things were not as optimistic in Cary after the Courage lost two in a row. In comparison, Sky Blue were riding a high having won both games in a home-and-home Game of the Week series against the Houston Dash. Few people expected to see Sky Blue entering the NWSL’s first midweek match as the No. 2 team in the league, but they did. Unfortunately, they’d leave in third.

One reason for that was the change in personnel in Sky Blue’s starting lineup. With three games played over seven days, head coach Christy Holly opted to rest starters Sam Kerr and Raquel Rodriguez while starting Daphne Corboz and rookie McKenzie Meehan. In comparison, Courage head coach Paul Riley rolled out much the same lineup as in previous weeks with the only major difference being starting backup keeper Katelyn Rowland in goal. Riley also had captain Abby Erceg back after a one-game suspension after receiving two yellow cards in the Courage’s road match against the Pride. What resulted was a lopsided match, especially in terms of the attack. At the end of the night, the Courage had outshot Sky Blue, 21-2.

Although Sky Blue came out hot with Meehan testing Rowland less than a minute after kickoff, momentum shifted in favor of the Courage about 10 minutes into the match. The Courage were first able to capitalize on that shift just 20 minutes into the match when Taylor Smith played Lynn Williams a through ball, and Williams had time to turn to make a run on goal. Many players would be unable to get the best of Christie Pearce, one of the fastest, most consistent defenders in the league, but Williams used her own speed to do just that, allowing her to fire off a Goal-of-the-Week-worthy shot that blasted past Sky Blue’s rookie goalkeeper, Kailen Sheridan. The goal is the third of the season for the 2016 NWSL Golden Boot winner.

20' Every @lynnraenie goal this season has been a Goal-of-the-Week nominee so far. Does this one make the cut? #NCvNJ 1-0 pic.twitter.com/j29JpQ0BW3

Sky Blue tried to answer Williams’ goal, but they got too antsy and began sending passes into space that were too heavily-weighted for anyone to get to before the Courage defense turned it over. Not surprisingly then, it was the Courage who put the next shot on goal, but this time Sheridan was able to make the stop.

The Courage were once again denied in the 33rd minute when McDonald made a run on goal and took a shot from the top of the box, but Sheridan managed to take to the air to get a hand on the ball. The touch was just enough to change the direction of McDonald’s shot so that it deflected off the crossbar and back out into play, where Christie Pearce maneuvered it out of danger.

It appeared as though Sky Blue would have a chance on goal with about five minutes remaining in the half after Leah Galton received a throw-in and played it to Kelley O’Hara, who had been making a run along the near sideline for Galton. O’Hara drove the ball towards goal before sending a low cross intended for Meehan, but the ball was intercepted and the Courage immediately countered with their own attack on goal. Williams played the ball to Debinha, who moved the ball down the field and played the ball off to Williams who had used her speed to move out in front of Debinha. Pearce used her pace to stay with them the whole time, but she was unable to prevent Williams from getting off a shot. Luckily for Pearce, Sheridan was able to make a kick save, but unluckily for Pearce, the ball deflected off of her head and almost into the net.

That near own-goal was followed quickly by two consecutive corner kicks. On the second one, McDonald took to the air to head the ball on target, but Sheridan was able to use her body to make the stop. The ball deflected back into traffic and the Courage attempted to put the deflection past Sheridan, but Sarah Killion made a goal-line save to prevent the goal. However, Sky Blue’s inability to clear the ball proved fatal as Samantha Mewis was able to toe-poke the rebound into the back of the net to double the Courage lead just before the half.

The second half didn’t see any goals, but that was not for a lack of effort, especially from the Courage, who remained the dominant side throughout the second half as well. The Sky Blue attack did look more potent after Kerr and Rodriguez subbed in, and the two nearly connected for a Sky Blue goal shortly after Rodriguez entered the match.

However, just having the two star attackers back on the pitch wasn’t enough for the New Jersey side. While the team showed moments of brilliance–another no-look pass from Kerr, some beautiful passing sequences to build possession, and some foot skills to get out of sticky situations–they were ultimately unable to do anything with them. At times Sky Blue passed when in other games they would have shot, resulting in only two shots on goal all night.

Neither Pearce nor Kelley O’Hara had good nights, which contributed to the lackluster performance by their team. O’Hara had a number of bad touches that resulted in turnovers, and she passed the ball into space more than once, only to have no teammate anywhere nearby to receive it. Pearce, normally one of the most reliable players on the field, found herself tested by the speed and Lynn Williams, a fun matchup to watch as the two battled it out head-to-head in the Courage final third. It’s not often that attackers get the best Pearce, but Williams seemed to all but have Pearce’s number tonight.

The player who did have a stellar performance for Sky Blue, though, was Sheridan. Although she let two goals by her–two goals that one could argue even the best, most experienced keepers in the league would have had difficulty getting to–she had arguably the best game thus far of her professional career. In fact, the second half played out like a Kailen Sheridan highlight reel as she made save after save to deny the Courage a third goal. Her final total of 11 established an NWSL-era Sky Blue record for most saves in a game.

Neither team has long to focus on tonight’s results since both are back in action Saturday, May 27. The Courage next travel to Chicago to take on the Red Stars while Sky Blue returns home to host the Orlando Pride.