The Lowdown: Buying or selling at the quarter point 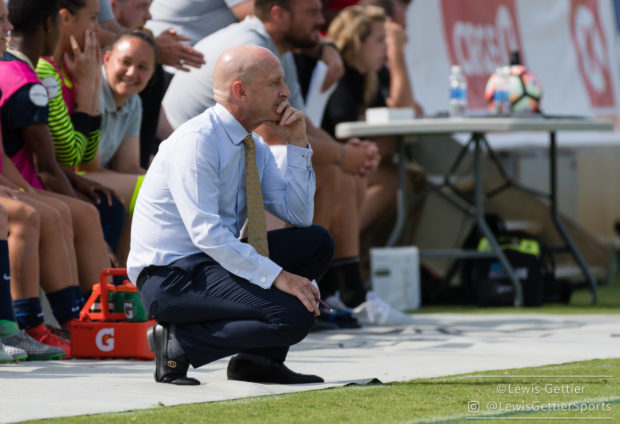 NC Courage head coach Paul Riley during a match between the NC Courage and the Chicago Red Stars in Cary, NC in Week 6 of the 2017 NWSL season. Photo by Lewis Gettier.

We’re now one-quarter of the way through the NWSL season, and most of what we know is that we don’t know much. The two most high-profile signings are playing for teams languishing at or near the bottom of the table. Sky Blue, a team that regularly starts a back line consisting of a 41-year old and three players and a keeper all 23 and younger, are sitting in 2nd place. The Thorns attack is in neutral, but they have lost only once. The Reign have outscored opponents 11-3 in two wins and 7-4 in their other four matches. They do not have a clean sheet.

Let’s take a look at each team and play a little buy or sell. In other words are we buying them where they stand, or selling in preparation for a drop?

The Courage have lost two straight and are still two points clear, which indicates how inconsistent everything else was while they were winning four straight to start the season. The losing streak should not be all that concerning though. Every team is allowed a clunker from time to time, and Sunday’s 1st half against the Red Stars was much closer than 3-0 indicated and that was without captain Abby Erceg. What baffles is why Jess McDonald started off in back. Elizabeth Eddy was not on the injury report, and if that’s not when Courtney Niemiec or Meredith Speck get off the bench, then you have to wonder what they’re doing on the roster.

It is no easy feat to take six points off the same team over eight days, but that’s exactly what Sky Blue did against the Dash over the last two Saturdays. More importantly, they seemed to get Sam Kerr on track as well as Christie Pearce back into the lineup. The bright side is the team has started to eke out results from matches in which they are not necessarily the better team. The downside is that the defense remains a work in progress and may be susceptible to speedy players out on the flanks. That potential weakness will be tested Wednesday against North Carolina and again Saturday against the Pride.

Slowly but surely the flat start to the season is becoming a memory. Christen Press has been excellent the last two weeks, the midfield flexibility is showing itself, and the defense backstopped by Alyssa Naeher has been sound throughout. If they can get their secondary scorers going—Sofia Huerta had a nice goal in North Carolina—there will be no stopping them. Of concern is the performance of Arin Gilliland as well as Vanessa DiBernardo—who was already on the injury report—limping off injured during the 2nd half on Sunday.

The Thorns are a tough read. Sure they are missing several key pieces, but they also have enough talent on the field that they should be a better attacking side than they have been so far. There has been very little wide play, very little dangerous moments from Christine Sinclair, and the buildup leaves much to be desired. That said, they remain tough as nails having rallied to earn draws against the Reign and Breakers and have conceded less than a goal per game even with some anxious moments from keeper Adriana Franch. It looks like Tobin Heath is out at least the next two games leading into the FIFA break, and it looks more and more like the Thorns are going to need her to get right.

Sitting behind their Cascadian rivals—and a top four spot—on a tiebreaker, the Reign are another anomaly. They have torn two teams to shreds but have been unable to win any of their other four including Sunday at home against the Pride, who were forced to insert a recently-signed backup keeper for more than an hour. They have also yet to keep a clean sheet in the post-Kendall Fletcher era. There is no doubt the Reign can play and, especially when they are able to knock the ball wide, are difficult to contain. But as they flip flop from formation to formation after three years of very little tinkering, the jury remains out.

You’d figure at some point the defense would get frustrated at the Blues’ relative inability to find the back of the net. It has not happened. With only three goals allowed this season, they have now conceded 23 over 26 games since the mass exodus of retirements and pregnancies following their 2015 NWSL Championship. Vlatko Andonovski rolled out Lo’eau LaBonta and Rebecca Moros as twin holding midfielders in Washington, and while it was hardly perfect, the result was another shutout. Getting Alexa Newfield a goal Saturday was not only a bright spot, it was worth two points, but this team has little chance to succeed without major contributions from Sydney Leroux and Shea Groom. Leroux had her most active game of the season in Washington, and Groom’s ribs should only get better.

Two things came to mind watching the Breakers play on Friday night. The first was that it’s nice to see a viable team in Boston. They were tremendous in the opening 45 minutes, clearly the superior side and not by accident or fluke. The second was that when the Thorns began to turn up the pressure, the Breakers were not yet ready to close the deal. Combine that with the fact that depth is still an issue in places with this team and this looks to be about where they belong. That doesn’t mean many teams are going to want to see them.

The Pride are getting better, but there are still some issues, and the single table makes it tricky to climb over too many teams if you fall too far behind. Their last three games have been a win and two road draws, which are not bad results, but they nearly paid twice for being a bit too fast and loose on the ball trying to close it out, and could not hold a late lead in Kansas City. But anything that would have been said about the Pride took on a different tone on Sunday when Ashlyn Harris was injured taking a simple goal kick. If they have to play a lengthy stretch without Harris, it will put even more pressure on a defense that has underachieved so far in 2017.

The Dash have lost three games in a row, and there are whispers from multiple corners of the WoSo world that things are not great behind the scenes. They were uninspired at home against Sky Blue and should have won—or at least given themselves a chance to win—the return match in New Jersey only to botch a defensive set piece and wound up going home empty handed. Sure, injuries have kept the midfield from being entirely intact before last week or to be particularly consistent before that, and Carli Lloyd remains in England, but even in the back the consistency the team was expecting has not been there. Something needs to change soon.

If the Spirit hadn’t been tantalizingly close to two trophies last year, it’s possible their slow start would be looked upon as a part of a promising rebuild. Young players are showing well, and the youngest of them all, Mallory Pugh, has been signed and made her debut for the club on the weekend. Left back has been an issue though, and they played the weekend without Tori Huster, which combined with the season-ending injury to Joanan Lohman left the midfield lacking enough bite. The smart money is on the Spirit getting better throughout the season and even better beyond that. Their three-year playoff streak is in some trouble though.

-My Week 6 Player of the Week ballot: 1) Lindsey Horan – single-handedly turned things around in Boston with her work on both ends. She helped create both Thorns goals and helped keep one out that would have made it 3-1 for Boston; 2) Nicole Barnhart – when the FC Kansas City defense does capitulate, Barnhart is there to deal with it. Few keepers combine the tactical and technical skills of Barnart, and both were on display against the Spirit; 3) Natasha Dowie – Scored one and assisted on another as she continues to prove herself a worthy striker with her movement, sophistication, and ability to finish.

-I watched the Courage after the fact and fully expected to see Jess McDonald culpable on the three Red Stars goals, but she really wasn’t. That said, there was too much available space around and behind the back three. I wouldn’t rush to put McDonald back there anytime soon, but she put forth a decent account of herself.

-Jaelene Hinke had a strong game in the Courage midfield. She’s been lost in the weeds a bit since being effectively dropped from the national team pool and being injured earlier this season.

-Have to appreciate the effort from Caroline Stanley who, one mistake aside, helped the Pride earn a road point in Seattle after being sprung into action not only within the game, but as a recently added goalkeeper replacement in Orlando.

-Mixed reviews from those who attempted to use go90 over the weekend, but adding the games to the NWSL site for all to see looks to have finally shifted focus away from whether or not people can watch to the actual substance of what is happening on the field.

-Not in any way a fan of home and home series in soccer, but this week NWSL managed to do something worse. The Courage have to face the Red Stars again this weekend but in between host Sky Blue in a midweek tilt. Meanwhile the Red Stars are free of midweek clutter as they prepare for the rematch.

-On the career front, Brittany Taylor is the first NWSL player to crack 8,000 minutes played. She ended the weekend on 8,010 for her career. Lauren Barnes is next at 7,963.

-Kallman, whose teams went 8-30-6 during the 44 straight games in which she played 90 minutes, sat out altogether on Saturday with her spot going to Alyssa Kleiner.

-Sarah Killion now has a league-leading 5 goals, including 4 from the penalty spot.

-Caroline Stanley became the first goalkeeper in NWSL to appear for three different clubs. She played for the Reign in 2015 and Sky Blue FC last season.