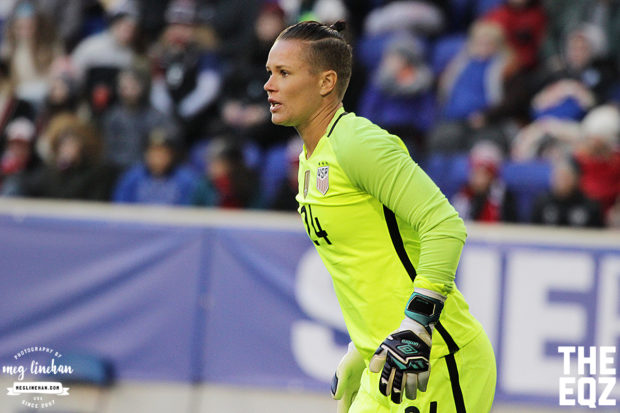 Ashlyn Harris is out for eight weeks after injuring her quadriceps. (MEG LINEHAN/Equalizer Soccer)

The Orlando Pride announced Tuesday evening that starting goalkeeper Ashlyn Harris will be out for eight weeks after suffering a quadriceps injury near her hip during Sunday’s match against the Seattle Reign.

In approximately the 25th minute, Harris performed a goal kick and immediately grabbed her right hip before falling to her knees. After training staff assessed the keeper on the pitch, she was assisted off the field and subbed out of the match. Until that moment she had played every minute for the Pride this season.

The length of Harris’s recovery also means the goalkeeper will miss the United States women’s national team June camp. The team travels to Europe for a pair of friendlies against Sweden on June 8 and Norway on June 11. Harris will also be cutting it close to return to the USWNT in time for this summer’s Tournament of Nations, which kicks off on July 27.

Caroline Stanley, who subbed in for Harris on Sunday, will remain with the Pride in Harris’s absence. The former Sky Blue FC goalkeeper signed with Orlando last week after backup goalkeeper Aubrey Bledsoe was sidelined with a concussion. Depending on Bledsoe’s status, Stanley may not see any additional minutes in goal for the Pride, but the team has said she will travel with the team to New Jersey as they take on her former club on Saturday.