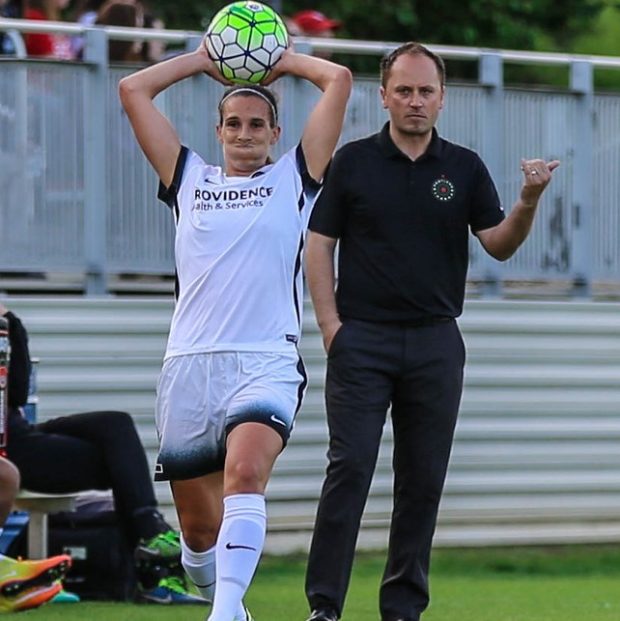 ALLSTON, Mass. — The Portland Thorns fought their way to a 2-2 draw against the Boston Breakers on a windy, brisk Friday night at Jordan Field. Forward Nadia Nadim tallied both goals for Portland, first the tide-changing penalty kick, then finished off a bit of lovely passing in the 83rd minute to earn the point on the road.

But had the events of a few weeks ago gone differently, it’s possible Nadim could have been in a different shade of red playing for the Washington Spirit, as part of a trade for Mallory Pugh. Of course, despite reports that Pugh was hoping her final destination in the National Women’s Soccer League would be Portland, she did in fact sign with Washington and made her professional debut this weekend.

So when asked about that big “what might have been” trade between Mallory Pugh and the Portland Thorns and the Washington Spirit, head coach Mark Parsons seemed a bit surprised to field the question in Boston.

“I can’t comment on—as what I’ve read, it’s the same as you, and that is that there’s been a lot of drama around it,” he said to some laughter. “And, I’m going to be honest here, there’s been a lot of drama around it, and the actual facts of it [are], from what I understand is Washington wasn’t going to entertain any trades. They dug in there, they held tight and Pugh had a decision to make. I think everyone, everyone, was rooting for her to be in the NWSL.

When asked if he was happy to keep the team together, safe even from the swirl of potential trades with names being batted around on social media, Parsons stayed off the topic of any specifics into his own roster. He instead noted the ebb and flow of American players overseas and the influx of international players, especially Marta. He did mention that he is already talking to international recruits for the 2018 season, and that front looks positive across the board. “It’s looking strong,” Parsons said. “The interest in this league is only growing.”

But with all the talk about NWSL roster trends, Parsons did credit retaining Pugh in the NWSL and America to the new collective bargaining agreement between U.S. Soccer and the USWNT players.. While he didn’t have much insider information, to him, “it sounds like a big focus was to make sure the league was as strong as it could [be] so the Americans could stay here. It sounds like, reading the same things you guys were, they had input in supporting the NWSL, raising the minimum standards: ‘we want to play here, we want to be here, things have to improve a little bit to continue what needs to be done,’ which is move forward each year.”

Ultimately, neither Parsons nor the National Women’s Soccer League truly needed Mallory Pugh playing in Providence Park. For the Thorns, while the results haven’t exactly been easy so far in 2017 and they are missing key players such as Tobin Heath due to lingering injuries, trading for Pugh doesn’t solve any of their problems. There’s more risk than reward to breaking up the 2016 NWSL Shield winning team for The Next Big Thing.

For the league, Pugh successfully ending up in Washington means a big media and marketing boost. It means Pugh commanding the front page of the Washington Post sports section before her debut at the Plex:

Pugh in Washington means more eyeballs, period. That’s a good thing, even if it was a little messy to get there, and it took influence from all levels to keep her in the States. It’s hard to argue that Pugh-watch, which made it into a Champions League pregame show on FS1 thanks to Grant Wahl, didn’t make some waves in the larger world of soccer.

Something pretty similar just happened in the WNBA, thanks to their number one draft pick Kelsey Plum and some front-office drama over trades (or more accurately: lack of). But as Howard Megdal argued at The Summitt regarding Plum and her eventual contract signing with the San Antonio Stars, stories like this are only signs of women’s sports’ growth and evolution overall.

“A great outcome for the league,” as Mark Parsons told media on Friday night. Parsons, who had something resembling a front row seat for Pugh’s signing with the Washington Spirit, whether he wanted it or not, is probably just hopeful that the questions about Pugh are behind him.

Now there’s really only one thing for Parsons to think about when it comes to her ending up at the Washington Spirit: “I’m not looking forward to playing against her.”