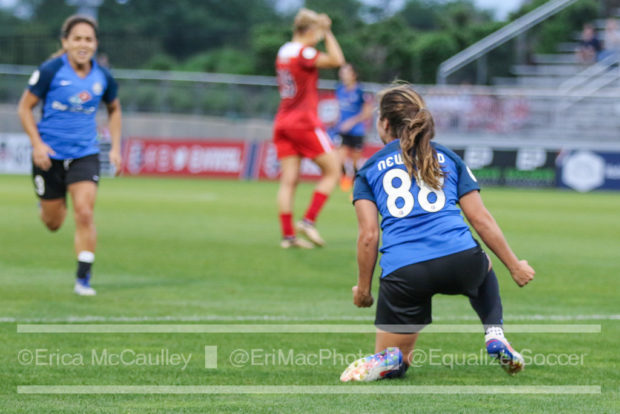 Alexa Newfield dropped to her knees after scoring the game-winning goal against the Spirit. (photo copyright EriMac Photo for The Equalizer)

Alexa Newfield scored the game’s only goal to lift visiting FC Kansas City over the Washington Spirit. It was the third time in four home matches that the Spirit fell 1-0. Here’s a look at three takeaways from last night’s game.

At the time she was drafted, Meggie Dougherty Howard appeared to be a good pick up that would provide additional depth at the area of the field where the Spirit was the deepest at least on paper.  If there’s any silver lining to the litany of injuries the Spirit have suffered this season, however, it’s that Dougherty Howard has gotten a chance to showcase what she’s capable of in the middle of park. Her vision allowed her to set up her teammates on more than one occasion and her tenacity earned the free kick in the second half that led to one of the team’s most dangerous chances of the night.

“She wants to play one, two touch,” head coach Jim Gabarra said about the Florida product, noting that she’s great fit for the club. “She’s got a good tactical awareness of where to play the ball and where to play the ball to make the player she’s playing the ball to have a good chance to succeed. I think she’s got a great heart and she’s a real competitor, and I think that’s all the things that are getting her playing time right now.”

Another player that’s fit right in with her club is FC Kansas City left back Christina Gibbons. She wasn’t perfect last night–in fact, a botched clearance from her led to the Spirit’s first shot on goal in the game–but for large swatches of the game, it was hard to tell she’s a rookie. For much of the evening she got the better of Cheyna Williams in what was the most entertaining battle of the night.

Three-time NWSL Defender of the Year Becky Sauerbrunn had high praise for her fellow defender postgame.

“Tonight she played against one of paceist forwards in the league and she’s just so savvy with how she uses her body. She can play herself out of pressure. She’s coming…it’s been like she’s been playing with the team forever….She fits in so well with the rest of us, and it’s been an absolute pleasure to play with her and I see her, you know, National Team everything in the future. I think she’s got a really long, bright future ahead of her.”

It will be interesting to see how these two players progress throughout the season. Both have really showcased  last night why people continue to say the level in this league continues to rise.

Important Game for Both Sides

Both Washington and Kansas City came into this game needing a win after suffering some bad luck, especially in regards to the injury department, this season.  Perhaps it seems a bit much to call a match in May a must win, but particularly for the Spirit, it was.

In truth, there wasn’t a lot separating these two sides in last night’s affair.  For Washington’s part, the team did generate a decent number of chances, but alas the majority of them were easily handled by keeper Nicole Barnhart. The Blues managed half as many shots on goal but managed to take advantage of the Spirit backline’s disorganization on Alexa Newfield’s goal, and that one chance was the difference in the game.

“Anytime you get a win, it’s awesome,” Vlatko Andonovski said after the game. “Then when you get a win away, it’s even better. But when things aren’t going your way for a few games and you get a win, it just shows that we can do it that, we’re able to do it, [we] just needed that one shot, one bounce, one free kick or restart, whatever it is. It’s just one like thing that we’ve been missing, and I’m just glad that tonight it went our way.”

On the other side of the ball, Spirit continue to miss something offensively. When the team managed to get into Kansas City’s final third, that final pass or touch was lacking and they also seems to be missing a bit of luck. Prior to Newfield’s goal, Spirit midfielder Kristie Mewis’ shot hit the underside of the crossbar. A fraction of an inch lower and that shot is in.  In sum, Washington didn’t get the needed shot or bounce it needed last night.

While Washington’s defense was certainly better than in last week’s blowout against Seattle, against a team that’s established more rhythm in the attack, it’s easy to imagine that the Spirit backline would have conceded once or twice more. The defense is still unorganized at times and too often caught on the counter.

After that disastrous Seattle game, the Spirit looked at the film and determined that it was individual errors more so than the collective effect of the backline that led to the lopsided scoreline.

“We looked at the film and made some really bad individual defensive mistakes, and that resulted in some wide open spaces against some good players which you can’t do in this league,” Gabarra said. “I think we evaluated that individually and collectively and learned from those mistakes, and tonight I still wasn’t completely happy with the reaction after giving up the goal. But I think it was certainly better than Seattle, so you got to look at it as the next step in the learning process.”

In deciding to go with a four back, Gabarra benched Kassey Kallman, a player who recently set the record for most consecutive minutes played, for Alyssa Kleiner. In regards to the move, Gabarra stated that Kallman isn’t a left back and Kleiner is better at getting into the attack.

Kallman might not be a natural left back, but she was more than serviceable for FC Kansas City in her rookie season there. Last week’s poor performance aside, it seems odd that Kallman wouldn’t get a run out at center back, especially given how often Whitney Church has been caught flat footed or just beaten this season.

-Last night the Spirit recognized its old YouTube commentary crew Michael Minnich and Danielle Malagari during halftime. While the team’s front office gets more than its fair share of decisions wrong, management was spot on here. Admittedly, I didn’t get a chance to listen to Michael and Danielle as much I would have liked since I was  in attendance. I did, however, enjoy interacting with them and appreciated their knowledge and dedication.

-Perhaps it’s fitting that when all eyes are on the youngest American to ever play in the NWSL, an American that was older than most when she made her debut was the difference maker. Alexa Newfield’s path to professional soccer was far from linear after suffering a series of knee injuries and transferring from Georgia. That path required her to request a sixth year of eligibility and to battle through pain in 2015 with North Carolina. It was far from ideal, but Newfield stuck with it even when she was advised to hang up her cleats. While last night was Pugh’s debut, it was also Newfield’s first professional goal, and that’s pretty darn special, too.