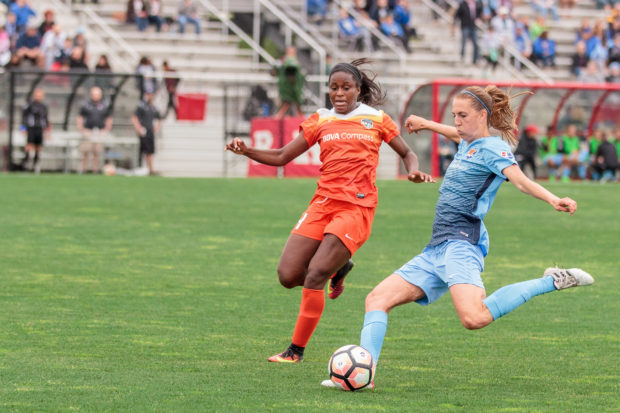 With a game-winning goal from Raquel Rodriguez, Sky Blue FC held off the Houston Dash to win two in a row for the first time this season in a 2-1 victory at Yurcak Field in Piscataway, N.J, featured on Lifetime’s Game of the Week.

Rodriguez’s goal came in the 85th minute in a free kick set after a caution was given to Cambria Privett off a late charge. Daphne Corboz sent a beautiful cross into the mix and the 5’4 Costa Rican was in the right place at the right time to toe the ball in past the Dash keeper Lydia Williams.

It was a hard fought and fast paced game from kick-off on the pitch. The first look on goal came early in the 2nd minute, as Nikki Stanton missed wide right on a charge and assist from Rodriquez. The action was not all Sky Blue though, as the next great look on goal came in the 7th minute for the Dash with a missed Nichelle Prince shot off a beautiful assist from Rachel Daly.

Very aggressive and physical possessions from both clubs would follow. In the 19th minute, a penalty was conceded by Houston’s Amber Brooks on a hard foul inside the box on Rodriquez. Sarah Killion then connected on the following penalty kick with a shot to the bottom left corner as Williams went to the right to attempt a save to put Sky Blue FC up by one in the 20th minute. The goal was Killion’s 5th of the season giving her sole possession of the league lead.

With the aggressiveness in full swing, the Dash would answer back in the 40th minute with a beautiful Andressa shot from the center of the box to the bottom right corner. The game went to halftime 1-1.

The second half was not much different from the first, with both teams attacking offensively and pulling off beautiful stops defensively. The ball did seem to stay more in Dash territory, with Williams being challenged hard on Sky Blue pushes, like the one that came in the 68th minute as Williams saved a Samantha Kerr header in mid-air right at the goal line. The Dash did have their own notable pushes though, and Sky Blue keeper Kailen Sheriden had a few notable saves herself, including the long range shot from Daly in the 76th minute.

Just nine minutes later, Sky Blue capitalized off another Dash foul to go up 2-1 in the 85th minute. The three minutes of extra time would not be enough for Houston to net a tying goal, with Sky Blue FC holding off the team avenging for a rematch of the meeting between the to clubs just a week ago in week five of NWSL as the Dash lost 3-1 in Houston.

Sky Blue FC (3-2-1, 10 pts) are slated for a Wednesday game in Week 7 against the North Carolina Courage at North Carolina with a 7:30 p.m. EDT kick-off time. The Houston Dash (2-4-0, 6 pts) will be featured again on Lifetimes Game of the Week against the Seattle Reign at BBVA Compass Stadium in Houston with a 4 p.m. EDT slated kick-off.