Thorns rally to snag 2-2 draw from Breakers in Boston 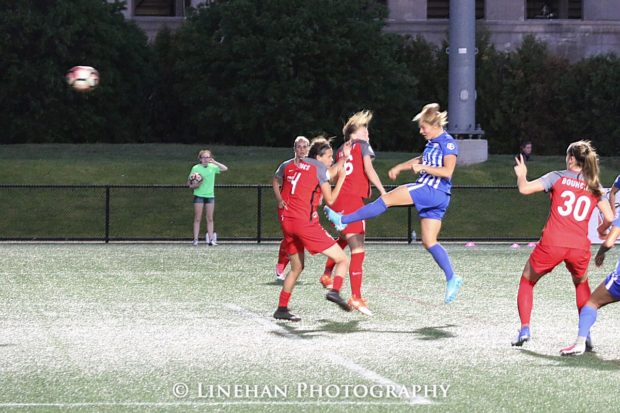 The Thorns rallied from 2-0 down in Boston on Friday night to eke out a 2-2 draw against the Breakers in front of a season-high 3,321 at Jordan Field. Nadia Nadim scored both Thorns goals—the first from the penalty spot—to offset Breaker goals by Natasha Dowie and Rosie White. The Thorns’ third consecutive draw established a franchise record.

In the first NWSL match this season no played on a Saturday or Sunday, the Breakers emerged on the front foot and carried much of the early possession. But it was the Thorns who created the first significant chance of the opening minutes when Nadim stepped into one at the top of the 18 and forced Breakers’ keeper Abby Smith into a world class save to keep it out of the upper corner in the 24th minute.

The Breakers finally delivered on their territorial advantage, taking advantage of a poor throw-in by Celest Boureille. Adriana Leon jumped the throw-in, left it for Dowie and then took off to the left corner behind Boureille. Dowie one-touched it to Rose Lavelle who played it wide to Leon. Meanwhile Dowie slipped through the penalty area and positioned herself at the far post where she was able to head in Leon’s 38th minute cross for her 3rd goal of the season.

Dowie puts Boston up, 1-0. That Leon cross tho. #BOSvPOR pic.twitter.com/LFS2YPWbpC

The lead doubled soon after halftime and also began with a throw-in. Julie King delivered a long throw up the right flank that Dowie ran down. After a protracted battle against Meghan Klingenberg she was able to get off a cross. White timed her run well and despite being marked by both Thorns center backs was able to position herself for a clear header that beat a helpless Franch to make it 2-0.

Despite falling behind by a second goal the Thorns began to move quicker both on and off the ball in the 2nd half and created more issues for the Breakers. The pivotal point of the match was in the 56th minute when Lindsey Horan collected the ball in what appeared to be an innocuous position near the left sideline. But she beat King to create space, and then two other Breakers before entering the box and unleashing a would-be cross that Megan Oyster handled to put the Thorns on the spot.

Nadim stepped and up and even as Smith guessed right, beat the keeper for her 3rd of the season in the 57th minute.

The Breakers nearly made it 3-1 a short time later but a great check back by Horan helped keep it 2-1. And the Breakers were rarely able to dictate over the last half hour. The Thorns finally capitalized in the 83rd minute.

Christine Sinclair tracked back near her defensive third and played a ball ahead to Horan. Horan chested it down to Hayley Raso who had space early and then entered the box to take on defenders. As Christen Westphal slid over to help, Raso played a great ball into the vacated space where Nadim was able to finish for her 4th of the season, first from the run of play.

A dangerous looking collision between Franch and Leon in the first half left both players down for a spell and Leon appeared to be bloodied in or near her mouth but both were able to play on.