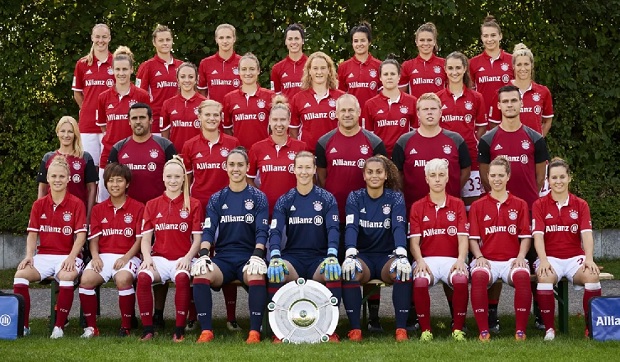 Also in today’s roundup, UEFA to launch “Together #WePlayStrong” campaign and Dick, Kerr Ladies gets a blue plaque.

Bayern Munich, unseated as German champions following two seasons at the top, will look far different when the new season begins this fall. A Thursday tweet by Jasmina Schweimler of WoSoZone indicated that at least eight players, representing more than 600 combined appearances for the club, will not be returning.

Radical changes incoming at @FCBfrauen. List of key players who are leaving the club at the end of the season is long! pic.twitter.com/w8LiM8FX0S

The most experienced of the bunch, Swiss striker Vanessa Burki, has been at Bayern for 11 seasons. Also included is Vivianne Miedema who should be in high demand over the summer. The Dutch striker already has 34 international goals and will not turn 21 until the day before her native Netherlands opens the 2017 European Championships as host. Japan’s Mana Iwabuchi is also part of the group set to depart Bayern.

Bayern Munich ceded the Bundesliga to Wolfsburg and enter the final weekend of play trying to secure the second German spot in next season’s UEFA Women’s Champions League. They need to defeat SGS Essen at home, else hope Turbine Potsdam lose or draw away to Duisburg.

There was no immediate word as to the destinations of the players on the move.

UEFA to launch “Together #WePlayStrong” initiative

The Union of European Football Associations (UEFA) has announced that it will its largest ever marketing campaign aimed at making soccer the most participated-in sport for European girls and women, according to a recent article in The Guardian. The “Together, #WePlayStrong” campaign, which will debut just a little more than a month before the 2017 European Championship kicks off, hopes to achieve this feat in just five years.

The campaign is the result of a recent UEFA survey that found that girls and young women who played soccer often had higher self-confidence, self-esteem, motivation, feelings of togetherness, life skills and general well-being than girls who participated in other sports or no sports at all. The survey polled over four thousand players ages 13 and up across six different countries: Denmark, England, Germany, Poland, Spain and Turkey.

“This study shows that girls who play football have greater self-confidence than those who don’t play the game,” UEFA’s women’s football adviser, Nadine Kessler, told The Guardian. “Drawing upon my own experience, I can’t emphasize enough how important this is when you are growing up.”

One of the ways the association is planning to increase female participation in soccer is through “Wildcats,” a new network of over 200 girls’ soccer teams that that will provide local, safe, and “girl-friendly” soccer programs that UEFA is currently developing. They hope that by doing so they will be able to help double the participation of girls and women in the sport. Two other campaign targets are doubling the number of female fans and enabling consistent success for women’s teams at on the world stage.

This week the first blue plaque to be dedicated to women’s football was unveiled in Preston to celebrate the Dick, Kerr Ladies Football Team that went onto to become the most successful women’s football team in history. The plaque can be seen on the former Dick, Kerr & Co., now Alstom, factory building where the team was originally formed 100 years ago to date.

The grandchildren of a few members of the original team were at the ceremony to help officially unveil the plaque. The grandson of Grace Sibbert, one of the founding players, expressed his pride in the recognition.

“I feel extremely proud to have been asked to share the unveiling of this deserved plaque in memory of the Dick, Kerr Ladies Football Team. The ‘legend’ that is Dick Kerr was passed on to me by my grandmother Grace Sibbert and her daughter Edna Sibbert, my Auntie” he said. “That part my grandmother played in getting the team started in 1917 always fills me with pride whenever I see photos of the teams or read about their exploits as pioneering ladies footballers.”