The Lowdown: Mother’s Day with the Roccaros 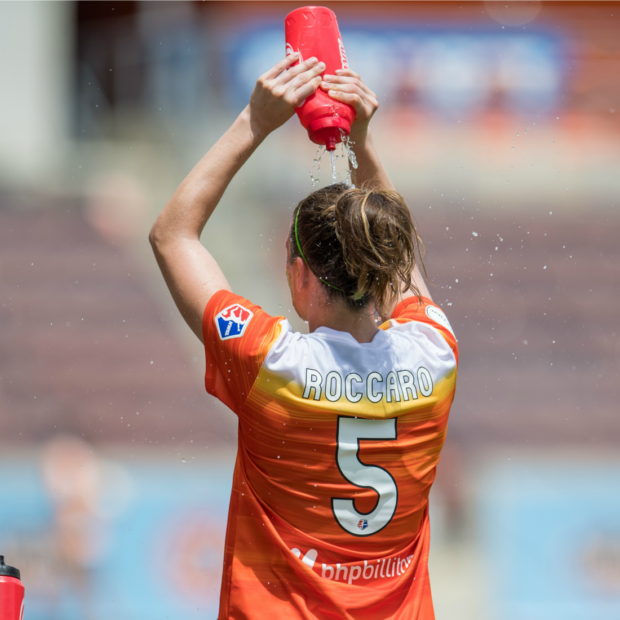 Cari Roccaro was not always so good at saying thank you. Not for things like passing her the ketchup or holding a door, but for bigger things. The things that mothers do. Like when her mom, more than 1,500 miles away, recently helped her search for a doctor in the Houston area.

“Now that I’m older and more mature and out of the house, I think I’m better about that,” Cari said by phone last week when asked to reflect on Mother’s Day and her relationship with her mother, Mary. “I do understand how much parents do cater to the needs of their kids. I’m more aware and more appreciative.”

Two days later, inside a Long Island home that bares very few indicators that a decorated youth and now professional soccer player grew up there, Mary and Tom Roccaro quietly prepared to watch their daughter Cari play for the Houston Dash on Lifetime.

“It’s nerve-wracking,” Mary said about watching her daughter play on television. “It’s fifteen minutes before game time and I have butterflies in my stomach.”

{DRAFT DAY LOOK BACK: Roccaro too good to pass up, says Waldrum}

When Cari spent some time back home last offseason, she noticed her parents without much going on most weekends and asked if they were always so content to sit around without doing much of anything. And that’s when it hit her that most of their weekends were spent shuttling her around Long Island—the Roccaros live about 45 minutes from Paul Riley’s soccer academy where Cari honed her skills—and beyond.

“Now that I’m out of the house,” Cari said, “they don’t have to do anything anymore. It took me until this past offseason to truly realize that.”

Time apart—which began when Cari went to college at Notre Dame—has also given her a greater appreciation for Mother’s Day.

“When I was away from her last year, I sent her a card, and I think it was the first time I reflected on how much she’s been there for me and helped shape me into the person and player I am today,” Cari said.

One thing Mary and her husband did from an early age was stay in the background. They were never the ones screaming on the sideline, never the ones pushing their daughter to play longer or to practice more.

“(Cari) was pretty young when we realized that unless it came from here,” Mary said, pointing to her heart, “she was never going to stick with it for the right reasons. I think that we were able to really live that and subscribe to that concept early on.”

When Saturday’s game kicked off, Mary and Tom stayed true to being understated parents. Mary never sat on the sofa, instead preferring to watch from a perch just in back of them. It was clear they are intimately familiar with the Dash players and their styles, but comments are few and far between, voices never raised. There were threats of pacing, but they never materialized.

Perhaps the U-20 World Cup in 2012 would have resulted in more outward emotion. For one, the Roccaros were home, sacrificing their sleep patterns to watch in the middle of the night (the tournament was in Japan.)

“I remember her saying when we were in the U-20 World Cup in 2012 and we barely beat Germany (in the final), that for the last 20 minutes she could barely breathe—like she was not doing well,” Cari said. “My mom doesn’t say anything but she secretly gets nervous.”

“That last game,” Mary said, her voice rising as if starting to relive the experience. “That was amazing. She was young and she had to fight for a spot to get on that team and really earned something that she should be proud of for the rest of her life.”

Even though they no longer need to provide the transportation and cannot always be in the stands, the Roccaros still plan their weekends around Cari’s matches. They both wish her good luck on game days (Tom sometimes sends puns about opponents, but since it’s Mother’s Day we’ll spare Dad from sharing any details) and according to Cari, “Usually by the time I check my phone after the game, I’ll have texts from them.”

Mary said she doesn’t have to miss being a soccer mom just yet because she has games to watch and a team to follow (she does prefer being at games live and travels often to see the Dash). But she always knows it will be hard to see it end. “The day that she tells me that she’s hanging up her cleats, I’ll be crying.”

Special thanks to the Roccaro family for their hospitality and Cari Roccaro for agreeing to allow her family to be the subject of this story.

-My Player of the Week ballot: 1) Nahomi Kawasumi – set the league record with four assists and could have had a few more with a little luck and some better finishing; 2) Sam Kerr – was a thorn in the side of the Dash all day Saturday and that assist to Leah Galton was otherworldly; 3) Jessica Fishlock – as usual was a workhorse on both ends for the Reign and made her mark without getting on the scoresheet in a match that was a bit closer than the final would indicate

-As great a match as Kawasumi had, it may have helped the Spirit if they actually put a defender within 10 yards of her at any point in the match. That might be part of the reason Kassey Kallman’s consecutive minutes streak ended (see below for more.)

-That wild, indirect free kick sequence in Chicago may have been Abby Smith’s first mistake of the season. She ever so narrowly got away with it.

-Stephanie Labbe has conceded nine goals in her last two games, and it’s difficult to say she is playing much worse than she did over the first three games.

-I’ll take the Reign in any pickup match among NWSL teams. Their transition game may also be back, which could be problematic for the rest of the league.

-Must I even mention go90? Another weekend filled with hiccups has NWSL on the verge of completely embarrassing itself. Week 6 should be a good one. Fans would really like to be able to see it.

-Kawasumi’s 4 assists is an NWSL first, and she is also the first to score or assist on 5 goals in the same game.

-Kassey Kallman’s record streak of regular season minutes got to 4,019 before Jim Gabarra subbed her out on Saturday. The record may not last long though. Abby Dahlkemper is hot on her heels with 3,870 consecutive minutes played.

-Dahlkemper and Danielle Colaprico, both 1st round picks in 2016, have each started all 45 possible regular season matches for their clubs. Another 1st round pick that year, Sam Mewis, has missed starts only to go in with the U.S.

-The Pride win came in the nick of time as it leaves the 2013 Washington Spirit alone with the longest winless streak in NWSL history—13 games. The Spirit were 0-12-1 with 5- and 7-game losing streaks sandwiched around a draw to Kansas City in Mark Parsons’s first game. The Pride were 0-9-3 during their 12-game streak.