It’s Friday, which means it’s almost time for another weekend of NWSL action. It also means it’s time for another edition of my Friday Favorites. This week I had the privilege of talking to two of the NWSL’s biggest stars, Joanna Lohman and Jessica McDonald. Both players are inspiring in their own right despite being in two very different places in their careers.

When Joanna Lohman tore her ACL just minutes into the Washington Spirit’s 2017 season opener, she had every reason to disappear from the public’s radar while she underwent reconstructive surgery and physical therapy to recover from the season-ending injury. Many professional athletes who suffer the same injury do, and who can blame them? An injury like that can be a very dark and depressing experience.

Lohman, however, isn’t the same as other professional athletes. If you follow any of her social media accounts, you know how often she posts words of inspiration, shares her love of sunsets, and sings and dances to songs of encouragement. So, really, it should come as no surprise that she is confronting her injury in the typical JoLo way: by being extremely positive and upbeat.

But it’s not all sunsets and rainbows and karaoke parties, and Lohman is also open and honest about that part of her recovery, too.

“I think for me, I’m very open when it comes to how I feel. And I think that makes me much more relatable and it humanizes me because, although I’m extremely positive and I do see the glass half-full, I don’t ever ignore how hard something this for me.

“Every single day I am heartbroken that I can’t play soccer, but there’s a difference between accepting the brutal facts of your reality and losing hope. For me, it’s part of who I am that I’m going to face the facts.”

Lohman admits that the first week after her surgery was one of the hardest weeks of her life. Having never experienced a knee injury, she was surprised by the pain and exhaustion that came with the physical therapy necessary to immediately get on the road to recovery. The multiple sessions in which she said she experienced unimaginable pain left her completely exhausted at the end of the day, and most nights she would lie in bed and cry because of the pain and exhaustion that consumed her.

Luckily, though, being a Washington, D.C. native has allowed her to stay with the Washington Spirit, the team she loves so much. She’s been able to talk to former and current teammates who have experienced similar injuries, and that has helped her to remain positive and be prepared for the challenges that wait in the months ahead.

“To get guidance from people who have very similar lifestyles to you and [who know] how you may feel and what you’re going to go through, I think it really shines a light on what is a dark process. Although she’s not on the Spirit anymore, Diana Matheson and I have been in contact frequently and she’s really help me to understand what should I be focusing on and what should I expect as I go through this.

“I’ve seen a lot of victories in these first few weeks, I’m walking without crutches and without a brace and every day I’m gaining degrees and my mobility and it’s wonderful, but I know I’m going to hit points of extreme frustration and everybody tells me that.”

As she said, just two weeks after surgery, Lohman has already made significant process. Yesterday she posted a video on Instagram of her walking unassisted into the open arms of her teammates. They chanted her name and wrapped her up in a group hug, sharing in that personal victory.

She shares these moments on social media partly because she’s always shared her life that way, but also as a means of staying connected to the soccer community. Although she is currently unable to play, she hasn’t lost the ability to connect with the players and fans that make the sport so great.

“It’s even more important for me to stay involved in the soccer community because it gives me so much energy and enjoyment,” she said. “If anything, this has allowed me to grow in ways that I haven’t been able to grow before, and it’s connecting me to people who have been hurt. Almost on a daily basis, someone reaches out to me and talks about how they just tore their ACL or they’re seven months out of surgery or six weeks out of surgery and what they’re doing.

Although she still has a long road ahead of her, Lohman continues grinding every day to get better, her eyes set on a return for the 2018 NWSL season and to the team that she calls home. And in the meantime, if you ever need to find Joanna Lohman, you know where to look. She’ll be at the Maryland SoccerPlex, cheering her teammates on. 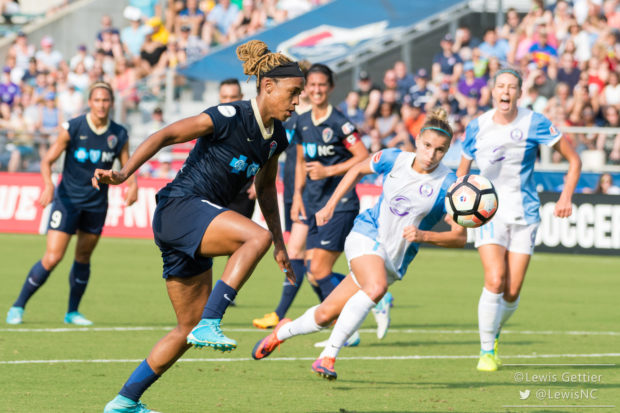 Last weekend, Jess McDonald put the North Carolina Courage on the board in the 32nd minute, knocking in a ball that had deflected off the crossbar. The goal was not only the game winner, lifting the Courage past the Breakers, it was McDonald’s 33rd NWSL goal, lifting her past Kim Little’s regular-season all-time scoring record.

“Overall, it’s just a really cool accomplishment, especially being in the NWSL, the top women’s professional league in the world, so it’s definitely something that I am proud about, and it’s truly humbling as well.

“The funny thing is, I had actually completely forgotten about it,” she said with a laugh. “I try not to focus on those things just because, obviously it’s a team sport and that’s kind of what you think about, just being part of a team environment overall.”

After scoring 33 goals, you may think that they all start to blend together, but one in particular stands out to the forward, and it’s not the record breaker.

“When I was playing for Portland Thorns about three years ago and we were playing Boston Breakers. I was coming off the bench probably and like the last 5 or 10 minutes left in the game–I was in like the 80th, 85th minute–and I was just the lone forward up top. I got played a through ball and I cut one defender, she got up, I ‘megged her, another defender came, I ‘megged her and ended up scoring right then and there, just like the first minute I got in the game.”

“It was just an incredible moment for me because the fan base in Portland, it’s just out of this world, and for them to feed off of something like that that I was able to accomplish, that’s just a feeling and a kind of play that you don’t forget in your career.”

Since McDonald is a player who focuses on her team more than herself, her biggest accomplishment in her career isn’t any goal or even her new record, though.

“Winning my first pro championship last year. That’s just kind of out of this work kind of feeling, and that’s something that you just work so hard for and you get rewarded with a championship at the end of the season, it’s just such a great feeling.”