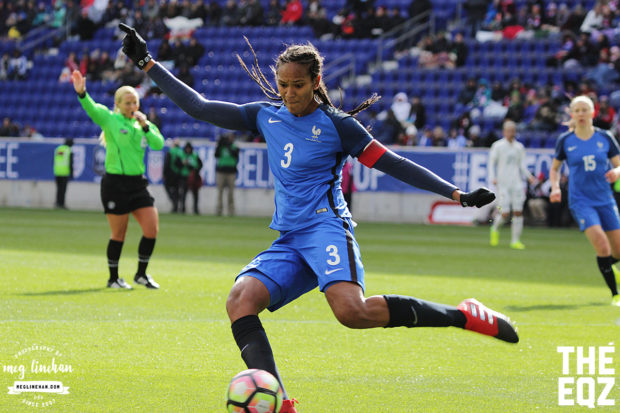 France’s women’s national team announced today that it had scheduled two friendlies for July, a July 7 fixture against Belgium and a July 11 one against Norway. The matches are the final parts of the French squad’s preparations for the 2017 EUROs, which kick off on July 16 in The Netherlands. The roster for these friendlies will most likely be the same as for the tournament itself. Head Coach Olivier Echouafni is set to announce his 23-player EURO roster on May 30.

The French WNT, who is in Group C, doesn’t kick off its EURO tournament until July 18, when it plays Iceland in the first match of group play. That match will be followed by fixtures against Austria on July 22 and Switzerland on July 26.

The French women’s national team could be a major contender in this year’s tournament. The squad, which until recently has seemingly had all the necessary components to be successful but somehow always managed to fall short, is currently undefeated on the year. They currently hold a 4-0-1 record for 2017, with the one draw came against Germany in the SheBelieves Cup. France went on to win that friendly tournament after defeating England, 2-1, and shocking the USWNT, 3-0.

The match against Norway will also be the Nordic side’s final match before the EUROs. Norway kicks off the tournament on July 16 against the host nation.

Washington Spirit forward Francisca Ordega was voted the NWSL Player of the Week for Week 4 of the 2017 season. Ordega was an integral part in the Spirit attack on Saturday, helping the team to defeat Sky Blue FC, 4-3. The win was the Spirit’s first of the season.

{THE LOWDOWN: Checking in on all 10 clubs | KRONICK REPORT: Fishlock stuns with first-minute finish}

In Saturday’s match, Ordega scored two goals and assisted on another. The Nigerian-international striker opened up scoring in just the 6th minute, finishing off a perfectly-weighted through ball from Line Sigvardsen Jensen. She then split the Sky Blue back line with a pass to Havana Solaun, who put it in for the Spirit’s second goal. In the 26th minute, Ordega again played a role in a Spirit goal when her shot was knocked into the back of the net by Sky Blue outside back Erin Simon for an own goal. She then completed her brace in the second half when she blocked goalkeeper Kailen Sheridan’s clearance and ran it in for the game-winning goal.

Kelley O’Hara, whose team was on the losing side of Ordega’s Spirit Saturday night, came in second for this week’s honor, and Portland’s Allie Long closed out the Top 3.

A legend of German women's football @annike_krahn will hang up her boots this summer. ➡️https://t.co/9wgrkSoi42
Thank you, Annike! ? pic.twitter.com/lMFEBKxVyB

Bayer Leverkusen announced on Tuesday that defender Annike Krahn is hanging up her boots at the conclusion of the Bundesliga’s regular season. Her club finishes out their season, and Krahn her professional career, on May 21 against SC Freiburg at the Nachwuchsleistungszentrum Kurtekotten.

“I’ve been thinking about calling it a day this summer for a while and I think now is the right time,” Krahn said in a statement released by the German federation.  “I’m very grateful for the many amazing moments that I’ve had through football. I’ve got to know some incredible people and had some fantastic experiences both at home and abroad. I now look forward to being able to spend more time with my family and friends and to finding a new career path.”

Krahn retired from international soccer last summer following Germany’s gold medal win at the Rio Olympics. She was also part of Germany’s World Cup winning 2007 squad, and was on the country’s 2009 and 2013 rosters when they won the European Championship. All in all she made 137 appearances for her country.

On Monday, Moya Dodd lost in the election for the Asian Football Confederation’s female representative spot on FIFA’s governing council. Despite being considered the favorite for the position thanks largely to the work she has done as the former vice president and current executive committee member of the AFC, Dodd lost out to Mahfuza Akhter Kiron of Bangladesh, 27-17. The results were not without controversy since Kiron was reportedly unable to correctly identify the current women’s world champions when asked shortly after the election.

Dodd has since released a statement on Facebook in response to her loss. In it Dodd says, “Naturally I’m disappointed that I wasn’t able to return to the FIFA Council today. I had hoped, through my policies and track record at FIFA, to persuade enough voting delegates to give me the job, but clearly that wasn’t the case.”

In her statement, Dodd also celebrated victories she has had in previous positions within FIFA, including contributions she made through the Women’s Football Taskforce and with the Female Leadership and Development Program. She also cited the adoption of the FIFA’s gender equality reforms as one of her successes.

“The opportunity to work for good inside the FIFA Council was a rare and precious one, and I feel satisfied that I have pursued it to the best of my ability,” Dodd also wrote.

Her full statement can be read here.

The Kronick: Fishlock stuns with first minute finish
Run of Play: The Night of Own Goals