The Lowdown: Checking in on all 10 clubs after Week 4 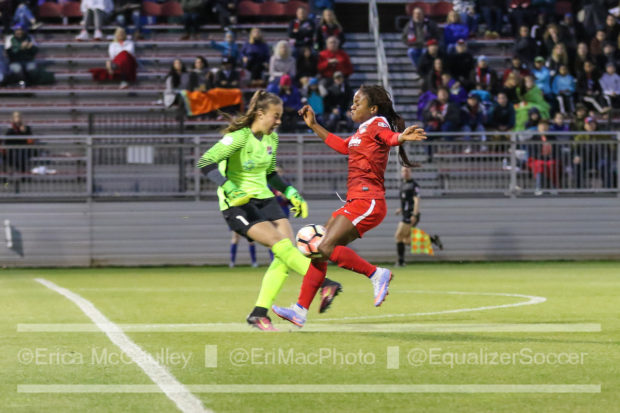 Every NWSL club has now played four matches and the table has begun to stretch with the undefeated Courage 5 points clear at the top and 10 points ahead of the winless Pride. But beyond the cold data of the table is the blossomin of a wildly unpredictable season during which performance rarely equals results and one week’s result is the next week’s head scratcher. With that in mind here is a quick status report on all 10 clubs.

The Courage could not have authored a better start to their existence in their new home and unlike most teams, you can easily make the argument the better side has actually won all of their matches. The philosophy has been similar—get the ball ahead to Lynn Williams and Jess McDonald as quickly and as often as possible—but the addition of Debinha has allowed for some more dynamic play in midfield and also allowed Sam Mewis to be more effective sitting deeper. The club has also shown its depth switching formations twice and overcoming the loss of Elizabeth Eddy in Week 1 and Jaelene Hinkle last weekend. In back, Sabrina D’Angelo is as solid as ever and Abby Dahlkemper has been rock solid.

Like last season the Thorns have figured out how to get results even when they’re neither at their best nor at full strength. Last weekend the Reign exposed their vulnerability to the press while at the same time the Thorns showed an ability to make in-game adjustments. They have scored five goals so far—including two from the spot and an own goal—which leaves only two from the run of play. And they’re too talented to keep that trend going. It is fair to wonder though if any players are feeling the heat with Mallory Pugh trade winds swirling over the Rose City.

Outlook: They need Heath and Reynolds back, but they’re just fine

The Breakers are respectable. And whether they continue on and reach the playoffs or don’t win another game all season they have already surpassed last year’s side just by showing they can play quality soccer on all three lines. The addition of Megan Oyster and the return of Abby Smith combined with an in-form Angela Salem, has solidified the spine of the club and allowed them to play more free, attacking soccer. We all knew how good Rose Lavelle had the potential of being but she has stepped in with minimal adjustment. They’re still thin in back—Midge Purce had to start at right back on opening day—but for the first time in a few years we can approach Breakers matches and think about what tactics might suit them best rather than trying to figure out how they can keep the result respectable. Natasha Dowie looks like a big-time goal scorer in NWSL.

Outlook: Fun team to watch but still likely to need every break to go their way to be a playoff team

It’s way too early to fret over the standings, but if you told Rory Dames a month ago that Christen Press, Steph McCaffrey, Sofia Huerta, and Jen Hoy would have a combined for zero goals through four weeks and that the Red Stars would still be inside the playoff bubble, he may have scratched his head but likely would have taken it. The two main issues to work out now are—are issues in the final third a simple slump or a sign that something is wrong? And what is the best place for Julie Ertz, and by extension, Danielle Colaprico. Arin Gilliland has also been off her game early in the season and may be starting to feel pressure from behind in the struggle to keep her job.

Outlook: They’re too good not to score more and Ertz and Colaprico are too good not to be effective wherever they line up but the team is more a work in progress than you would expect considering their roster consistency

The good news—the Dash are off to a solid start and can position themselves well for the summer if they can get the better of Sky Blue—who they play in the next two Lifetime Games of the Week. The bad news—even if they games they have won they have not often looked the better side, and injuries to Morgan Brian and Andressa have decimated the midfield. More good news is that Janine Van Wyk appears to have arrived ready to take NWSL by storm, and Kealia Ohai is off to an extraordinary start. They’ll need to be healthier and keep the ball more in order to stay on the top half of the table.

Outlook: Not sold, but Brian’s cameo last weekend made a difference and Carli Lloyd is also on the way back so there could be better soccer ahead.

By far the most difficult team to analyze. When the Dash rolled out a poor XI and could barely complete a pass in midfield, the Reign jumped on them to win 5-1. When the Breakers pressed them and whipped he ball around, they succumbed 3-0. When they pressed the Thorns they dominated but then allowed the Thorns to win the initiative after halftime. Laura Harvey has yet to settle on a formation or even a preferred group of personnel. Home games against the Spirit and Pride followed by a trip to Houston fill out the Reign’s May calendar. Is it too much to think they should be expecting all 9 points?

Outlook: Until I see them outplay a strong side over 90 minutes, I’ll stick with my preseason thought that there are too many changes and not enough in back.

FC Kansas City’s defensive integrity is sensational. Did Sky Blue or Orlando break them down for a single attack down the middle over the last two weeks? Clearly what ails the Blues is scoring since two great defensive efforts were enough to earn but a single point. It’s easy to see why too. Amy Rodriguez was set to be the focal point of the attack but tore her ACL in Week 1 while Shea Groom missed a week with broken ribs and spent much of Sunday’s 2nd half in considerable pain. Veterans Becky Sauerbrunn and Nicole Barnhart are both playing very well and the Desiree Scott/Lo’eau LoBanta pairing in defensive midfield has been excellent.

Outlook: A lesser team might be ready to capitulate but as long as the Blues stay stout defensively they’ll have a chance. They also need more from Sydney Leroux.

Rookies Meggie Dougherty Howard and Arielle Ship got in the starting XI on Saturday and the Spirit woke up from an early-season offensive malaise. They key of course was Francisca Ordega who played with enough flare and energy to have something of a say in all four goals. The next step will be combining quality play from all three lines and not relying quite so much of Stephanie Labbe’s shot-stopping abilities.

Outlook: Undecided. I was certain they were not the bottom team coming in, but losing Joanna Lohman, Cheyna Williams (now back), Katie Stengel, and Kristie Mewis has been cause for pause. Still expecting them to get better as the summer comes and goes.

Is it a troubling sign that the midfield looked its most lively the week Raquel Rodriguez and Daphne Corboz both missed the match for non-soccer related personal reasons? The defensive lapses that cost Sky Blue game were less troubling as they were expected when you run out a back five with no player older than 23 or beyond her second professional season. This is a team with talent, but also a team that better hope it can take points off the Dash who they play the next two Saturdays.

Outlook: Christie Pearce returning from her concussion is vital if Sky Blue are going to make a run. Whether or not they do, there are pieces in place that should set the club up to be very good in a year or two.

The Pride return home this weekend to face the Courage and will need to hand the league champions their first defeat of the season to avoid going in the record book alongside the 2013 Washington Spirit for the longest winless run in league history. They will also need a win soon to avoid sliding too far behind. Marta is clearly a cut above—just ask Brittany Taylor—but the Pride need to score more and avoid being in quicksand when Alex Morgan returns after the UWCL Champions League final.

Outlook: At some point they have to score more goals, right? It feels like a win could get them going but last year’s penchant for figuring out ways to lose appears to be back.

-My Player of the Week ballot: 1) Francisca Ordega – easy call. She was the best player in the best game and probably turned in the best performance of the season; 2) Angela Salem – made sure nothing got through the middle for the Courage and often dictated which way the Breakers attack was going to go; 3) Marta – her class was pure throughout highlighted by her first NWSL goal

-Julie Ertz seems like she can play anywhere in the center of the park, and Danielle Colaprico looked decent on the flank on Saturday. But my personal opinion is that Colaprico is just too good in defensive midfield to ever put her anywhere else.

-If we’re really taking head injuries that seriously, I’m curious how Shelina Zadorsky and especially Kelley O’Hara were allowed to stay in after knocking heads.

-Becky Sauerbrunn did not make my Player of the Week ballot, but she was outstanding.

-Is Abby Dahlkemper now the second best center back in NWSL behind Sauerbrunn?

-Watching Kassey Kallman complain when she was whistled for a PK makes you wonder—is there ever a situation in which a player would actually acknowledge committing a foul in the box?

-Spirit/Sky Blue and Thorns/Reign have been easily the two most entertaining matches of the year.

-Laura Harvey post game on Saturday: “Being honest, both teams were shocked we weren’t the game of the week.” Right there with you Laura.

-Jess McDonald now has more regular season goals than any NWSL player. Her game-winning strike against the Breakers was her 33rd, breaking a tie with Kim Little. McDonald has made 20 appearances more than Little, but also has no goals from the spot against 12 for Little.

-Christine Nairn missed the Reign match for personal reasons, ceding the league’s all-time lead for games played to teammate Lauren Barnes. White Nairn was missing just her second match ever—her first was April 26, 2014—Barnes got the start and has now played 89 of a possible 90 regular season matches. Barnes, whose only DNP was June 28, 2014, also took over the active lead in consecutive games played from Nairn. Barnes’s stream is at 54. The league record is 71 by Jen Buczkowski.

-Abby Smith broke the Breakers’ NWSL-era shutout record by keeping opponents off the board for 254 minutes. The old record was held by Jami Kranich. The 254 shutout minutes is also a club record.

-FC Kansas City’s late goal kept them from being shutout a third straight time—something that has never happened to the club.