Braces from Alex Morgan, Ada Hegerberg, and Eugénie Le Sommer, as well as goals from Wendie Renard, Saki Kumagi, and a Soyaux own goal, contributed to a 9-0 thrashing of Soyaux as Olympique Lyon won their 11th straight Division 1 Féminine title. The team is currently 19-0-1 in the season, with two matches to go.

They will meet rivals Paris Saint-Germain three times over the next month, once to wrap Division 1 Féminine play, once in the final of the Coupe de France Féminine as they look to defend five straight titles, and finally in the Champions League final on June 1 in Cardiff, Wales. Morgan and company knocked Carli Lloyd’s Manchester City out in the Champions League semifinal on the way to defending their 2016 title. Morgan is expected to rejoin the Orlando Pride after that match in June.

ERIN MCLEOD RETURNS TO THE FIELD

Canadian goalkeeper Erin McLeod saw the field for FC Rosengard for the first time in more than a year after suffering her third ACL tear in early 2016, forcing her to miss the Rio Olympics. McLeod, who left the Houston Dash after the 2015 season to sign with the Swedish team, earned a clean sheet in her return as Rosengard easily defeated Kopparbergs/Göteborg FC (whose roster includes Americans Sarah Teegarden and Savannah Levin) 5-0 with a brace from Ella Masar, another former Dash player.

Thank you! Happiest kid in the world to be back https://t.co/gr7bblVWrA

The goalkeeper returned to action in March, spending time training with Rosengard’s youth squads before beginning practice with the full team and sitting on the bench for the team’s exit from the Champions League in the quarterfinals. McLeod trained with Canada last month but has not yet returned to the squad. The roster for next month’s friendlies against Costa Rica has yet to be announced.

McKenzie Meehan receives an honor from her alma mater.

Meehan was extremely prolific in her time as an Eagle, setting the program records for most career goals, points, and game-winning goals. In 2013, she also set the program’s single season goal record at 20. When not terrorizing defenders on the pitch, Meehan earned both an undergraduate degree and an MBA from the university. She has seen time with both the U-20 and U-23 USWNTs, and was drafted in 2017 with the 23rd overall pick by Sky Blue. She has made two appearances for the team so far.

Mahfuza Akhter Kiron of Bangladesh is under immediate criticism after she won a vote today over Moya Dodd of Australia to hold the female representative’s spot for the Asian confederation on FIFA’s governing council. Dodd, a former Australian international, was considered the favorite after serving as an appointed member of FIFA from 2013 to 2016. She is a former vice president and current executive committee member of the Asian Football Confederation.

When asked by the BBC to name the current women’s world champions, Kiron first replied with Korea and Japan before getting it correct on her third try with the U.S. Naturally, this did not sit well with many of those players, some of whom, such as Alex Morgan, Carli Lloyd, and Morgan Brian, took to social media to express their displeasure with her lack of knowledge.

My vote was with @moyadodd. This is very disappointing. https://t.co/UM36jXpA6T

Diana Matheson was honored in her hometown. (Photo: Canada Soccer)

Canadian midfielder Diana Matheson received a unique honor in her hometown of Oakville, Ontario, where they designated a street in her honor. Rambler Court will retain its name but has a received a ceremonial sign in tandem, naming it Diana Matheson Way. Matheson grew up in Oakville and is a graduate of White Oaks Secondary School, where she captained the soccer team.

The Princeton graduate was traded in the offseason from the Washington Spirit to the Seattle Reign, but she tore her ACL before the current NWSL season began, forcing her to miss the 2017 entirely. She has been a member of the Canadian Women’s National Team since 2003, winning back to back bronze medals at the 2012 and 2016 Olympics. 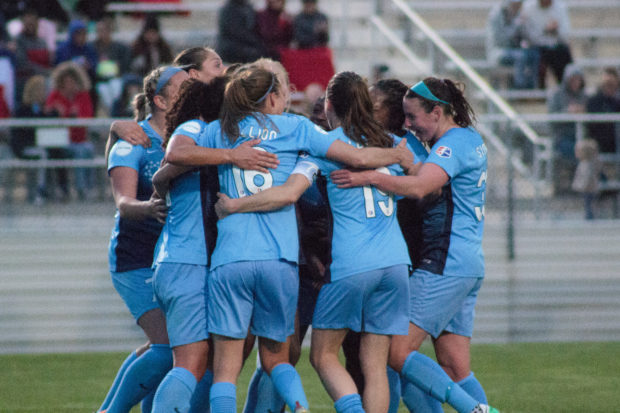 Sky Blue FC will be partnering with New York Soccer Club to form Sky Blue – NYSC, a youth development program that will be an inaugural member of the U.S. Soccer Girls’ Development Academy, which launches this fall. The program will field teams at all levels from U14 to U19 and on top of player development, will also serve as a scouting tool and pathway to the US Soccer Youth National Teams.

“We are very excited to establish Sky Blue – NYSC and be named as an initial member of the U.S. Soccer Girls’ Development Academy, and to play a pivotal role in the furtherance and development of the women’s game,” said Steven Temares, co-owner of Sky Blue. “As an organization, we remain focused on the technical ability and tactical awareness of our players. We also strive to play a brand of entertaining and winning soccer that is world-class in caliber. With the establishment of Sky Blue – NYSC, we are thrilled to join the exceptional talents of New York Soccer Club with the women’s professional game. New York Soccer Club has produced many youth national players through their U.S. Soccer Boys’ Development Academy program, and we look forward to having similar success on the girls’ side with Sky Blue – NYSC.”

U-19, U-20 ROSTERS ANNOUNCED FOR MATCHES AGAINST JAPAN

The U-19 and U-20 USWNTs will hold training camps at the US Soccer National Training Center in Carson, California, later this month. Both teams will face Japan’s U-20 team at the conclusion of their camps. The U-20 roster features Jaelin Howell, Sophia Smith, and Brianna Pinto, all of whom have been included in recent senior WNT camps. Defender Samantha Hiatt will attend both camps.

NWSL Week In Review: Low attendance slightly concerning
The Lowdown: Checking in on all 10 clubs after Week 4