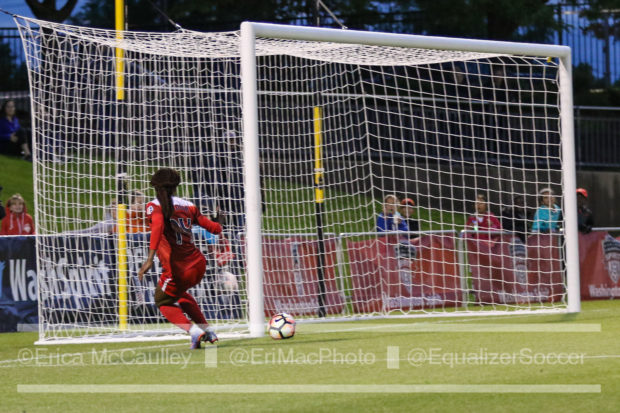 Francisca Ordega finished into the empty net after Kailen Sheridan vacated it for a challenge that didn’t quite pan out. (photo copyright EriMac Photo for The Equalizer)

On Saturday in Maryland, the Washington Spirit and Sky Blue combined for 7 goals in one of the most wide open matches in NWSL history. Here’s a look at a few of the key takeaways from the contest.

After scoring just one goal in the first three games on the season, few would have predicted the Spirit tallying four times in Saturday night’s contest even against a young backline.  At the center of Washington’s scoring bonanza was Francisca Ordega who played a role in all four goals. The Nigerian international’s performance was like a caffeine jolt for the slumping side.

The forward really displayed her whole toolkit, not only punishing defenders with her speed on her two goals and on the first of which, withstanding a healthy dose of physicality before finding the back of the net. Equally impressive was the through ball she sent to Havana Solaun to set up the Spirit’s third goal. On the other side of the ball, Ordega tracked back and defended well against one of the league’s most pacey attacks.

“To see her individual effort on at least two of the goals was pretty awesome and you could see that she was a big threat to them and they were having troubles dealing with her strength and her speed,” Spirit goalkeeper Stephanie Labbe said about the forward’s performance. “You know it’s fun to see a player have those games and you know it doesn’t happen all the time. To see a player just kind of on their game and just feeling it is really fun to watch.”

While questions regarding Ordega’s stamina have often surfaced, her workrate Saturday showed that she’s capable of producing even when logging more minutes. Perhaps the more central question is whether Ordega can produce more consistently or at least attract enough attention to open the door for her teammates.

“Experience: that most brutal of teachers. But you learn, my God do you learn.”  That quote is usually attributed to C.S. Lewis. Whether he actually said it or not, is a up for debate, but how much Sky Blue’s inexperience at the back showed last weekend is not.

In Week 3, the with a backline full of rookies or second year players along with a rookie keeper managed a clean sheet against Kansas City, a team, much like Washington, that’s struggling to manufacture goals. This past weekend, however, Sky Blue got punished for nearly every mistake they made at the back including a bad back pass and a poor decision to come out of the box by Kailen Sheridan. Washington managed just four shots on target, but put away three of those.

“You can’t concede four goals and play soccer, so it’s a big learning curve,” head coach Christy Holly said of his team’s defensive performance. “They’re not as bad as what they showed here. Certainly, it’s a bad representation of who they are… I said to them, ‘We have two options here: the back four can look at this an opportunity to hold their head down and feel sorry for themselves or say this is a fantastic learning opportunity. Welcome to the pros.’ We got exposed.”

If there’s anyone in the league that knows about being inexperienced and learning on the job, it might be Holly, who in his first year at the helm of Sky Blue overachieved with a young team. It will be interesting to see how the Sky Blue defense responds to the weak performance.

This weekend’s affair was in a lot of ways an inverse of what we’ve seen so far this season from the Spirit. Washington, especially last week, seemed to lack intensity or aggressiveness.  On Saturday, the home side withstood a couple of solid chances from the visitors in the opening minutes and then actually seem to find the tenacity it had been missing. At the end of the first half, the Spirit had not only with it’s first multiple goal effort of the season but ended up winning about 20 percent more duels than it had to prior week.

Conversely, Sky Blue lacked energy in the first half. Undoubtedly, the some of Sky Blue’s slow start is attributable to key players like Raquel Rodriguez, Christine Pearce and Daphne Corboz being unavailable. Regardless of absences, midfielder Sky Blue Sarah Killion made clear that the first half was unacceptable.

In the second half, the tables turned decidedly in the visitors’ favor. Sky Blue took 10 shots in the second half to the Spirit’s two.  When asked about the Sky Blue putting his side under a lot of pressure in the second half, Gabbara said that his opponent came out with almost a desperation and his team lacked the same intensity to start the half.

While this weekend’s game was the first multi-goal effort by the Spirit, it also was the first time they’ve conceded more than once. In all honesty, it’s far from surprising that the Spirit backline allowed three goals in the match especially given Sky Blue’s speed. If there’s one positive of Washington’s defensive effort aside from Labbe’s stops at the end of the game to preserve the win, it’s the fact that a sizable number of Sky Blue’s chances came from behind the 18 yard box, which allowed Labbe to make plays.

What do the Spirit need to do to improve defensively moving forward?

“To stay tight and deny more shots,” Labbe said when asked. “ I think that’s the biggest thing. We get the team tighter and keep preventing shots, and preventing goal scoring opportunities. That’s always the name of the game but I think we’re still giving up a little bit too much so keep working on that.”