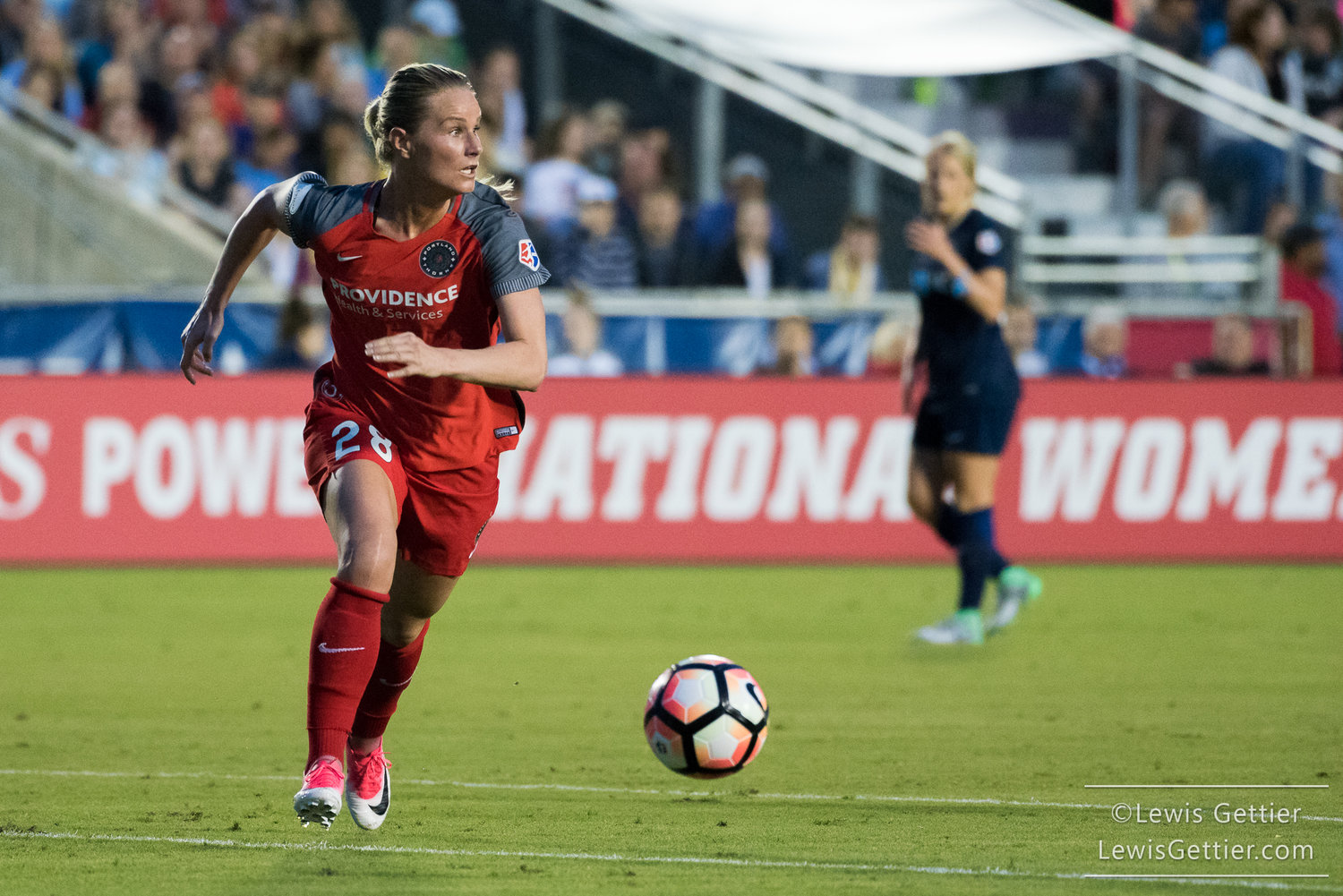 Portland, hampered more by injuries this season than most teams, did well to earn the point since they went down a goal almost at the opening whistle. Jess Fishlock, wearing the captain’s armband for Seattle, opened up scoring in the very first minute of the match. Lindsey Horan played a bad, bouncing pass right to Fishlock, who took one quick touch before rifling in a shot from distance and into the upper 90 of the goal. Thorns goalkeeper Adrianna Franch dove to make the save, but there was nothing she could do as Fishlock’s strike was too perfectly placed.

1' – @JessFishlock kicks off this match with a ? into the upper corner of the net. ??? #PORvSEA
0 – 1 pic.twitter.com/CHuOnxJujy

The excitement died down some after Fishlock’s goal as both teams began to settle and work on finding their rhythms. Although Laura Harvey’s lineup claimed Seattle would be playing in a 3-5-2, the Reign held that shape only briefly as players fluidly shifted around the pitch as the game wore on, playing at 4-3-3 at times and what appeared to be a 3-4-3, depending on where Merritt Mathias was. The formation changes seemed to be effective in keeping Portland somewhat out of sync on defense for the first half of the game.

Despite a decent attempt on goal by Amandine Henry, still in search of her first NWSL goal, the Thorns would remain off the board until well into the first half, and then it’d be the work of the Reign to put them there. In the 37th minute, Hayley Raso moved the ball down the flank, turned and sent a low cross in front of goal. Although there seemed to be little threat by Portland in the goal area, Fishlock slid and poked the ball, most likely in attempts of passing it back to Reign goalkeeper Haley Kopemeyer. Instead, Fishlock put too much power behind it and inadvertently knocked it under Kopmeyer’s arm for an own goal. It was the third own goal in as many games on Saturday.

Luckily for Fishlock, though, Seattle would quickly regain the lead thanks to Merritt Mathias. Originally pushed up into the right wingback position from her usual spot at right back, Mathias’s attacking instincts took over and saw her drift more centrally, playing what looked like a false 9. That allowed her to put a number of shots on goal during the first half, really testing Franch for a good part of the night. Mathias was finally able to get a ball past Franch in the 39th minute on a play that originated with defender Rebekah Stott moving the ball down the flank. After a brief spell of possession for the Reign, Stott found herself with possession one again, this time in front of goal, but she was a little too heavy on the touch. Mathias was able to get to the ball before Franch or Emily Sonnett, who came sliding in behind her, and Mathias was able to slip a shot past Franch to put Seattle back on top where they’d remain at the half.

The second half started off much the same way as the first, with Fishlock taking a shot in the opening minutes. However, this time the Welsh international’s shot was rushed and her placement was not as flawless, resulting in the ball sailing well over the crossbar. Megan Rapinoe then tried to earn her way onto the scoresheet, putting a rocket on frame in the 78th minute, but Franch dove far enough to get her fingertips on the ball and just knock Rapinoe’s ball wide of goal.

Despite a better showing by Portland in the second half, it appeared as though Seattle was on its way to earning its first three road points of the season, but Allie Long would not be denied. Long, who has been playing in a deeper position for the Thorns for much of this season and had yet to score as a result, did just that in the 82nd minute. Meghan Klingenberg, who subbed on for Meghan Cox at the start of the second half, sent a lofted ball into the box, and Allie Long out-jumped the competition to head the ball past Kopmeyer.

Both teams continued to fight hard for a game winner, but neither team could find the back of the net after Long’s goal. One of the best opportunities for Portland came in stoppage time when Christine Sinclair sent in a strong shot right in front of the goal, but Lindsey Elston was in the right place at the right time for the goal-line clearance. At the end of the match, the score remained even and both teams would walk away with a hard-fought point.

And hard-fought it was. The Cascadia rivalry between the Reign and Thorns is the most intense rivalry in the NWSL, and it always seems to be even more intense when played before 16,000-plus fans in Providence Park. As usual, the game was extremely physical, with a large number of players flying to the pitch, fouls being whistled, and yellow cards being shown.

Fishlock and Amandine Henry got into a number of tussles in the midfield, occasionally popping back up with smiles or even throwing their arms around one another’s shoulders after a tumble. Merritt Mathias also had a number of aggressive tackles and run-ins, including one blatant foul on Emily Sonnett near the endline that earned her a stern talking to (but no card) by the ref. At the end of the match, four players–Rapinoe and Fishlock for Seattle and Henry and Horan for Portland–were booked.

The next time these two teams meet up isn’t until July 1, when the Thorns travel to Seattle for the first of two visits to Memorial Stadium this year. In the meantime, the Reign next return home to take on the Washington Spirit while the Thorns hit the road to take on FC Kansas City. Both matches are at 4 p.m. ET on Saturday, May 13.