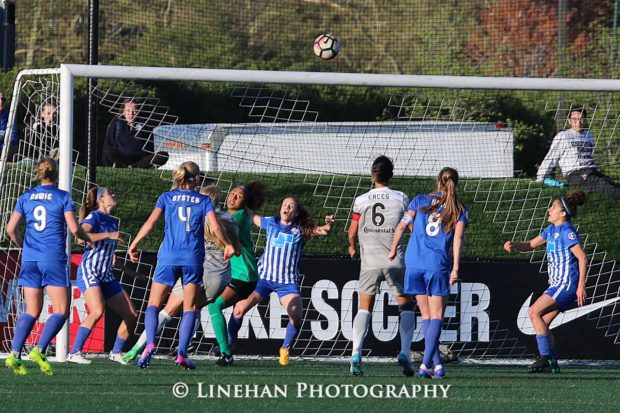 Players from both teams watch as Abby Dahlkemper’s corner kick comes in. Moments later the Courage had the only goal of the night. (photo copyright Linehan Photography for The Equalizer)

Jess McDonald’s 32nd minute goal sealed two pieces of NWSL history as it stood up as the only tally in the Courage’s 1-0 victory away to the Breakers on Sunday evening at Jordan Field. The goal was McDonald’s 33rd in NWSL regular season play giving her sole possession of the all-time NWSL lead over Kim Little. The Courage win puts them alongside the 2014 Seattle Reign FC as the only clubs to open a season with four consecutive victories.

The Courage returned to a 4-4-2 with Taylor Smith getting the start for the injured Jaelene Hinkle and dropping in to play right back. With the wind at their backs early the Courage came out on the front foot and spent much of the opening half attacking the Breakers goal—much to the delight of neutral observers who had to battle intense sun glare in front of the Courage goal in the 1st half.

It was Smith who got forward and won the corner kick that led to the game’s only goal. Abby Dahlkemper—making her 44th consecutive start—hit an excellent corner kick that Abby Erceg who headed it off the crossbar. McDonald was in position to file the rebound into the net for her 2nd goal of the season and 33rd all-time. Little has 20 fewer games than McDonald but also made a dozen penalties in her NWSL career. None of McDonald’s 33 goals have been from the spot.

The goal was scored in the 32nd minute and it ended the Breakers’ and Abby Smith’s shutout streak at 254 minutes. The previous individual record was held by Jami Kranich.

The Breakers nearly equalized later in the half when Adriana Leon appeared to shoot wide but the wind combined with some intense spin sent the ball back in front of goal and Courage keeper Sabrina D’Angelo had to scramble over to knock it to safety.

The match included the first three picks from the 2017 NWSL draft and half of the 1st round. The Breakers started Rose Lavelle (No. 1) and Midge Purce (No. 9) and used Morgan Andrews (No. 3) and Ifeoma Onumonu (No. 8) off the bench. The Courage used Ashley Hatch (No. 2) as a late sub. The Courage also had the No. 7 pick but Darian Jenkins is still rehabbing a knee injury and has yet to play.

The Courage (4-0-0, 12 pts) end the week with a five-point cushion on the Thorns and are three wins from matching the Reign’s 7-0-0 start of three years ago. Next up is a Mother’s Day trip to Orlando to face the winless Pride. The Breakers (2-2-0, 6 pts) failed to win a third straight match for the first time in NWSL. They will attempt to open a new streak next weekend in Chicago, also on Mother’s Day.