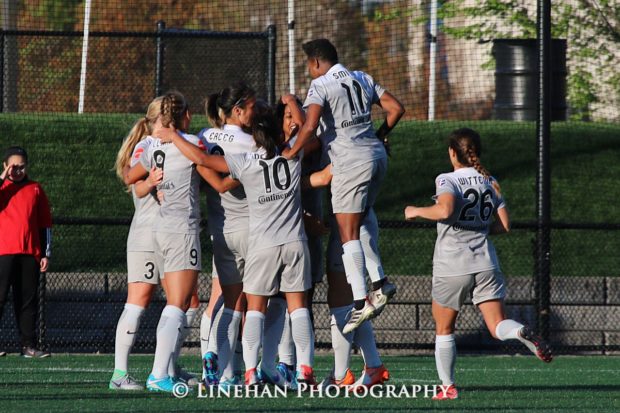 The Breakers and Courage battled in a top-of-the-table clash at Jordan Field on Sunday. It was an entertaining contest that saw the Courage sneak the only goal to remain perfect through four matches. That’s more than we can say for the go90 streams. Here are some thoughts:

Jess McDonald needs to get her due

The lone goal in the match was scored by Jessica McDonald and it made her the all-time leading goal scorer in the history of the league. Granted it’s not an incredibly long history and none of the four Golden Boot winners has spent more than three seasons in the league. But scoring goals in any league is no easy feat and it is a testament to McDonald’s consistency that she has been able to bag 33 of them—none of which have been penalty kicks.

Part of the reason McDonald gets overlooked when discussing NWSL’s goal scorers is because she winds up in a different city every year. Originally a Chicago Red Star, she was waived midway through 2013 and picked up by the Reign. She then spent 2014 in Portland and 2015 in Houston—never missing a game either season—before being traded to the Flash for 2016. This year, McDonald stayed with the same team for the first time in NWSL, but she still had to move after the Flash became the Courage and moved to North Carolina.

North Carolina may be the place McDonald finally fortifies a reputation. Her workrate is off the charts and her relationship with strike partner Lynn Williams is something to behold. Throw in Debinha, who had her quietest night of the season including a weak finish after a great setup from Williams, and McDonald is poised to continue getting better.

Angela Salem is making a difference

Quick, who is the only NWSL player who went to Francis Marion University? You guessed it, it’s Angela Salem. And at 28, in her second season in Boston, Salem is making a difference in the Breakers’ midfield. Salem’s defensive presence in midfield was a vital part of the 2013 Flash team that won the Shield and she is back to playing with a similar bite and effectiveness. Rookie midfielder Rose Lavelle was named April’s Player of the Month, helped immensely by Salem’s ability to hold down the fort behind her.

The pieces around Salem this season have no doubt helped her game. Last season, Matt Beard and Salem’s first in Boston, the back line could barely play the ball into the midfield and the club was constantly in retreat mode. That did not allow Salem the full freedom to be her most effective self. The additions of Megan Oyster and Allysha Chapman have helped give the defense some respectability and Salem is back to doing what she does best—thwarting opposition attack sequences and moving the ball ahead to Lavelle to organize the attack.

Speaking of Lavelle she turned in another solid effort on Sunday and often got the better or North Carolina midfielder Samantha Mewis. Lavelle’s USWNT teammate, Mewis likes to dictate from a deep midfield role but Lavelle made that an extremely difficult task in this one.

Make no mistake about the Breakers—they are still very much a work in progress. But with Lavelle in control of the center of the midfield and Salem cleaning things up behind her, the framework of a strong side is in place.

Four weeks into the new season and the quality, accessibility, and overall satisfaction of the league’s new streaming deal remains near the top of every NWSL discussion. Breakers-Courage, a match that should have been on pretty much everyone’s must-watch list, was no exception. And the truth is the action was extremely difficult to follow at times.

The main issue was how often the main camera lost contact with the ball. Jordan Field is difficult for streaming because the camera has to be positioned too close to the field to see the near corners. But Sunday night, empty swaths of pitch spent far too much time on computer screens around the world while the play was—obviously—elsewhere. Other times the camera remained on the player who had passed the ball leaving the viewer in the dark about what happened and why. Things did get a little bit better in the 2nd half but it was still hardly good enough.

Jordan Field has another disadvantage, that being the sun which at certain times of day throws an unbearable glare on the far left corner of the field. At some point NWSL will get big enough that such factors will be a part of stadium and start time selection, but that is down the road. For now, teams have to play where they can find a field willing and able to house their matches.

Other factors cannot be overlooked. Between games jumping to commercial, to simultaneous streams being reversed and the fixed at the expense of seeing Rose Lavelle’s first NWSL goal, and now shoddy camera work, fans are near the point of boiling over. The new media deal was supposed to help grow NWSL’s fan base—which the Lifetime facet is surely doing—but at the moment the streaming element it is doing a better job of testing the existing base than adding to it.