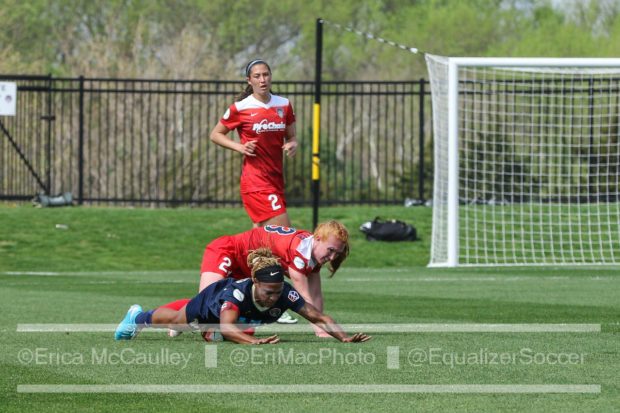 The Washington Spirit defeated historic rival, New Jersey-based Sky Blue FC, 4-3, at home Saturday night for their first win of the season. Both teams are now 1-2-1.

With an important three points at stake, two teams that had combined for only three goals in six games this season, put on an offensive show Saturday. Nigerian international Francisca Ordega played a part in all four Washington goals, scoring twice, adding an assist and forcing an own goal.

After falling under immediate pressure by Sky Blue in the two minutes following kickoff, Washington took a 1-0 lead in the sixth minute with Ordega’s first goal of 2017, scored off an assist from Line Sigvardsen Jensen, against the run of play.

{GORDON:  On Ordega, the value of experience, and more}

But U.S. Women’s National Team defender Kelley O’Hara evened the score at 1-1 in the 12th minute, with her 12th National Women’s Soccer League goal. Labbé had blocked the previous shot from distance but the deflection fell right at O’Hara’s feet and she made no mistake in slipping it under the crossbar.

Washington took the lead again in the 25th minute on a Sky Blue own goal. Ordega flew into the box, drawing goalkeeper Kailen Sheridan off her line, but Ordega was able to flick a shot off the outside of her right foot that Erin Simon sent into the net while attempting to clear it off the goal line.

Havana Solaun’s inside-out, right-footed shot off a great through ball from Ordega in the 34th minute, gave Washington a 3-1 lead at halftime. But Sky Blue again went on the offensive early in the second half. Within the first four minutes Leah Galton had a point blank shot saved by Labbé and a goal was called back for offsides.

Though Washington never trailed, its lead was cut in half twice in the second period. Sarah Killion scored her first of two goals, off an assist from O’Hara, to make it 3-2in the 50th minute. But Ordega scored her second goal six minutes later, off an assist from Solaun. Sheridan came out to clear the ball but Ordega beat her to it, chased the ball all the way to the goal line, and angled a left-footed shot inside the far post.

Killion finished up the night’s scoring in the 72nd minute when she converted a penalty kick awarded for a foul in the box. Sky Blue threatened to score several times late in regulation and in the final three minutes of stoppage time, but once again, Labbé came up big to help Washington close out the victory.

Possession was split evenly between Washington and New Jersey Saturday night and the game was arguably one of the more entertaining of the season. Sky Blue created more scoring opportunities but the Spirit were more efficient in the final third. Though, it should be noted that stalwart center back Christie Pearce was out for a second consecutive game due to concussion protocol. Saturday night was a major step in the right direction for both previously struggling offenses.