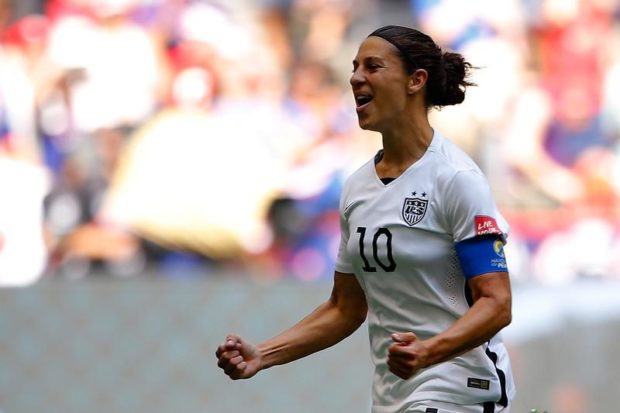 Carli Lloyd’s reputation for scoring in big games cane to fruition once again this week after smashing home the winner for Manchester City away in Lyon in the Women’s Champions League – but it wasn’t enough to see her side through as Alex Morgan’s side booked their place in the final.

Lloyd continued her run of starting every game for her wide after being named as a center forward by Head Coach Nick Cushing, and after a relatively quiet first half for City, it was the U.S captain who brought the tie to life. Pouncing on an error by keeper Sarah Bouhaddi early in the second half, Lloyd raced through on goal before lashing the ball into the roof of the net to make the tie 3-2 to Lyon on aggregate.

Unfortunately for the English side, making their debut in the competition this year, they were unable to add to Lloyd’s effort, as Lyon, who introduced Morgan midway through the second half, qualified for their second final in a row, to be played in Cardiff. Canadian Kadeisha Buchanan played 90 minutes in the match.

Both Morgan and Lloyd were in action for their clubs midweek on the domestic front, with Lloyd playing 90 minutes in a 1-1 draw at home to Birmingham City, while Morgan was forced off at half time away at bottom club Bordeaux, with Lyon relying on a Claire Lavogez free-kick eleven minutes from time to separate the two sides. Morgan later tweeted that the injury wasn’t serious and that she should be good in a few days.

And for everyone who streamed the match,I'm ok after going down, just a knee to knee collision that will be brand new in a few days. #TeamOL

Canadian Ashley Lawrence will face international teammate Buchanan in Cardiff as her PSG side comfortably overcame FC Barcelona in their UEFA Women’s Champions League semi-final second leg, winning the match 2-0, making it 5-1 on aggregate. Lawrence was also involved for PSG in the week, helping her side win 2-0 at Metz.

In England, Crystal Dunn opened her FA WSL account with a goal and an assist in a 6-0 win over newly promoted Yeovil Town, while she was a second half sub three days later as her side made it 10 goals in two games with a 4-0 win at Reading. They look like the team to beat at present.

Arsenal’s Heather O’Reilly couldn’t have been involved in two games any more different. Last weekend her side were involved in a 0-0 draw away at Sunderland, before they returned for a home match against Liverpool on Thursday, which ended 4-4. O’Reilly played the full 90 minutes at Sunderland, and 35 minutes as a second half sub in the thriller vs Liverpool.

In Sweden, Ella Masar McLeod was on the receiving end of a 3-2 loss to Eskilstuna United, who were in the Champions League last year, while there was better news for other Americans in the division.

Former Orlando Pride midfielder Becky Edwards and teammate Brett Maron were 3-0 winners at Limhamn Bunkeflo, while Savannah Levin and Sarah Teegarden helped Gothenburg win 2-0 at home against Vittsjo, who themselves had American midfielder and University of California graduate, Rachel Mercik, in their starting line-up.

Gina Lewandowski again played 90 minutes for current champions Bayern Munich in Germany, as her side shut out Hoffenheim in a 2-0 victory. The win still leaves her side third, four points behind leaders Wolfsburg.

In Norway, former Thorns keeper Michelle Betos and Breaker Stephanie Verdoia earned their first point of the season as they helped Valerenga to a 2-2 draw at home to Arna-Bjørnar. Toppserien Goalkeeper of the Year for 2016 and California Polytechnic State graduate Alyssa Giannetti, was facing Betos and Verdoia at the other end.

Another goalkeeper, Katie Fraine, achieved a shut out for her side Avaldsnes, but was powerless at the other end as her forwards drew a blank in a 0-0 draw with Røa.

Thursday Roundup: NWSL Announces Team of the Month
Allison’s Friday Favorites: FCKC gets its Pride on