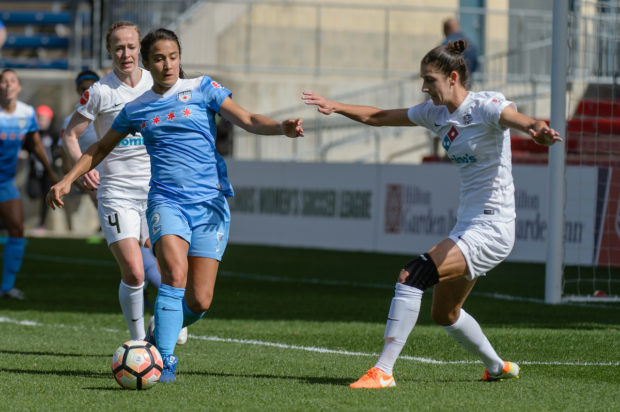 Jen Hoy returned to Chicago for a fifth consecutive season to compete with a Red Stars team that many have predicted to compete for the league title this year. The 26-year old Pennsylvania native is working to try and help the Red Stars find their scoring rhythm as they host the Houston Dash this weekend. I chatted with Jen about the season thus far, the Red Stars recent re-brand, her time playing in Australia, and her obsession with food and nutrition!

Hannah Kronick: What’s the mindset going into this weekend as you guys host Houston? As well as the mindset for the team in general through the first three games?

Jen Hoy: Being 1-2 at the moment, we are excited about having home field advantage against Houston this weekend. I think that will be huge for us. At this point, we are focusing mostly on ourselves–not so much on the intricacies of what Houston is going to bring, but what we need to do better as a team and as a group to make sure we are ready to go.

HK: What are your goals this year? What are you hoping to accomplish personally and collectively as a team?

JH: As a team, we are taking it game by game. It’s so early in the season and anything can happen. We are all about trying to get as many points as possible. We want to make sure we are in a position to get to the semifinals and that starts right now. As a team, we haven’t found our way in the offensive third as far as scoring goals, but once we do, they will just start flowing. I am really trying to set my teammates up as much as possible to give them scoring opportunities and I am also trying to find the back of the net too and contribute to the team in that way–to be as much as an offensive threat this season as possible.

HK: Your franchise as a whole has gone through a pretty robust re-brand from a marketing perspective. What are your thoughts on that?

JH: I’ve been hearing that [positive feedback in regards to the marketing efforts] a lot from fans, family members and other players in the NWSL. Our marketing team did a really great job with partnering with local artists, photographers, and bringing in people to help us put those projects together and bring them to life. The fans got really excited about it and Chicago really rallied around us, which was really cool! To be able to engage with the city and the community was really great. 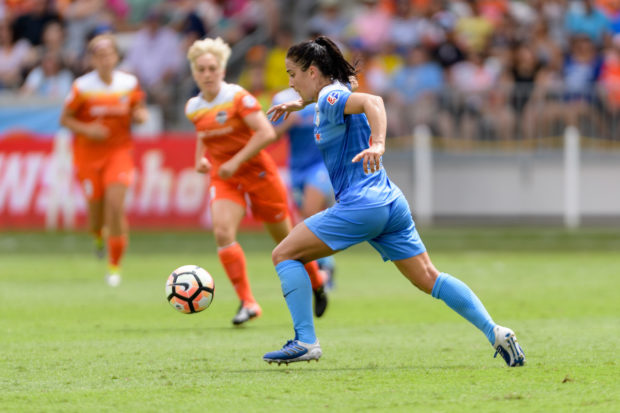 Hoy has started in all three games so far this season. (ISI Photos)

HK: I know you played in Australia during the off-season. Can you talk a little about how that experience was? What are the main challenges or differences between the W-League and the NWSL? Is that somewhere you hope to continue to play in the off-season?

JH: I would love nothing more than to go back to Australia, even to play for Newcastle. It was an incredible experience for me both on and off the field. I was able to continue to grow my game technically and tactically in Australia in a way that I may not have been able to do as quickly here in the NWSL. And I say it like that because while there is so much talent in that league and it’s an athletic league to play in, I did find that I had a little bit more time on the ball than I would have in the NWSL. So, I was able to try things and work on my movement off of the ball and grow my game in that way much more.

HK: What do you hope to see as far as growth from the league (NWSL) in the upcoming few years?

JH: From a player perspective, it has been exciting to be a part of something that continues to really grow and get traction. With the Lifetime deal, people want to support the league, they want to see us grow. It’s really where the demand is starting to skyrocket. It’s awesome to be a part of this. I think that for future players, the opportunities are only going to continue to expand which is all you can really hope for. Ultimately, the end goal is to make this something that can truly be a profession that is sustainable, like the men’s league is in terms of salary. It’s going to take time, but that’s where we are ultimately looking to go.

HK: And lastly, what can we find you doing when you aren’t training and playing soccer?

JH: Oh my goodness I have so many [hobbies]! I am really into the outdoors. I grew up always outside with my family being very nature-oriented. I love to go backpacking and rock climbing. I’m big-time into yoga and I also have an obsession with nutrition and food. My teammates love to talk to me about that. I make banana bread that they are all obsessed with. With the Girls Soccer Network, I started a blog for them called Jenuine Foodie. I wrote my first article recently–that’s been fun! It’s my foodie adventures and sort of how I got there on my journey with it.

Thursday Roundup: NWSL Announces Team of the Month
Allison’s Friday Favorites: FCKC gets its Pride on