Mallory Pugh tries to beat Jordan Nobbs to the ball at the SheBelieves Cup (photo: Chelsey Bush for The Equalizer)

Mallory Pugh has a contract offer from Paris-Saint Germain and could wind up with any number of NWSL clubs, SI’s Grant Wahl said in an Insider segment on FS1’s Champions League pregame show on Wednseday. On Tuesday, a source told The Equalizer there has been developments in the weeks since Pugh dropped out of UCLA to pursue a professional career, but that a lot is still up in the air.

Wahl’s reporting backs that up with one of the developments being a recent meeting between Pugh and the Washington Spirit, who hold the top position in the Distribution Ranking Order (DRO.) It does not appear though that the meeting did enough to persuade Pugh to accept a contract with U.S. Soccer to play in Washington. If she does sign with U.S. Soccer without completing her college degree, she would enter into NWSL through the DRO.

Enter the Thorns who already traded up the top spot in the DRO to get Pugh once when they sent the No. 3 overall pick in 2016 to the Breakers (who used it on Christen Westphal) only to have that position expire after Pugh decided to enroll at UCLA.

The Spirit made two trades over the winter to move up from 9th to 2nd and then 1st and now hold the cards regarding Pugh’s possible entry into NWSL. Wahl also mentioned that other NWSL teams—the Pride, Dash, and Reign were named—could wind up as the landing spot for Pugh.

BBC has announced its five-player shortlist for its Women’s Footballer of the Year 2017 award. The nominees are Melanie Behringer, Ada Hegerberg, Hedvig Lindahl, Marta and Christine Sinclair.

Behringer, 31, currently plays for Bayern Munich and recently retired from international soccer after 11 years playing for Germany. Last summer, the midfielder won Olympic gold with Germany, the nation’s first ever Olympic gold medal, after they defeated Sweden, 2-1. Behringer led the Olympics in scoring, having scored 5 of Germany’s 13 goals in the tournament. Previously Behringer won the 2007 World Cup and the 2008 and 2013 European Championships with Germany. She led Bayern Munich to consecutive Bundesliga titles and was nominated for FIFA World Player of the Year in 2016.

Also nominated is 21-year old Olympique Lyonnais forward Ada Hegerberg, who also plays for Norway. For club she helped Lyon win the treble–French Division 1 title, Coupe de France, and UEFA Champions League–in 2015/2016. That season she also led the French league and the Champions League in goals that year (33 and 13, respectively). Hegerberg was also voted the UEFA Best Women’s Player in Europe in 2016 and was Norway’s first female soccer player in 20 years to win the country’s Golden Ball award.

The only goalkeeper on the shortlist is Chelsea and Sweden keeper Hedvig Lindahl. Lindahl most famously helped Sweden defeat the three-time-reigning Olympic champions, the USWNT, in a penalty kick shootout in the 2016 summer Olympics. Lindahl and Sweden would go on to claim the silver medal after falling to Germany in the gold-medal match. The goalkeeper helped Chelsea win the Women’s Super League and FA Cup in 2014 and conceded the fewest goals in the WSL in 2015, allowing only 10. She is a five-time Swedish Women’s Goalkeeper of the Year and has represented her country in three World Cups, three Olympics and several European Championships.

Marta, one of the biggest names in women’s soccer history, is a five-time FIFA World Player of the Year (2006-2010) and recently made international headlines when she left FC Rosengård to sign with the Orlando Pride. The Brazilian-international forward has 116 caps and 108 caps for her country. Last year she helped the South American country advance to the bronze-medal match of the Rio Olympics, only to fall to Canada, 1-2.

The last finalist for the award is current Portland Thorns and Canada women’s national team Christine Sinclair. Sinclair is the greatest soccer player that Canada has ever produced, making 257 appearances for the country and scoring 167 goals. Last year Sinclair surpassed Mia Hamm’s goal total when she scored her 159th international goal during the CONCACAF Olympic qualifying tournament. She went on to help Canada win its second consecutive Olympic silver medal in Rio and her club to win the NWSL Shield in 2016 as well.

Olympique Lyonnais defeated FC Girondins de Bourdeaux, 1-0, this morning to close in on another French title. Despite a number of close chances for Lyon, the game remained scoreless well until the second half. However, Claire Lavogez broke the deadlock for Lyon in the 80th minute, placing a free kick just under the crossbar and above the reach of Bordeaux’s goalkeeper.

The scariest moment for American fans tuning in to the match’s YouTube stream occurred just before the end of the first half when Alex Morgan collided with 19-year-old goalkeeper Elisa Launay. It appeared as though the two players’ knees knocked as Launay tackled Morgan, sending both players down to the pitch for a couple of minutes. Both were attended to by trainers on the field, with Morgan using hand gestures to describe what happened. Eventually Morgan was helped up and was able to walk and then jog on her own accord. Play resumed for just a couple of touches before the halftime whistle sounded.

Although Morgan was not limping or visibly in pain, she was subbed off at the half in favor of Eugenie Le Sommer. That may have been partially to give Morgan rest, though, as several of Lyon’s other starters–Wendie Renard, Kadeisha Buchanan, Amel Majri, Camille Abily, Dzsenifer Marozsan and Saki Kumagai–were benched for rest.

Paris Saint-Germain were also in action today, defeating Metz 2-0. Eve Perisset and Marie-Laure Delie were the goal scorers for PSG.

Update — Morgan tweeted later that she expects to be all better in a few days.

And for everyone who streamed the match,I'm ok after going down, just a knee to knee collision that will be brand new in a few days. #TeamOL

On Tuesday New Zealand women’s national team forward Jasmine Pereira announced her retirement from international soccer. The Auckland native, who is only 20 years old and has 24 caps for the Football Ferns, cited unhappiness caused by financial insecurity as the reason behind her decision.

“Playing internationally and training like a professional athlete then not having the support money-wise really made it hard,” Pereira told Trackside Radio. “I got to a point where I was struggling too much and I felt life was far too short to feel so unhappy about that kind of stuff, so I decided to stop…I just felt it was my time to do something else and something that made me happy.

“It was an honor to wear the fern on my chest and travel around the world but over time it just became a lot harder when I had so many other things I needed to pay for and do.”

Pereira also said that the financial stress from competing for New Zealand had caused her to move back in with her mother, and she was forced to juggle two jobs on top of training.

The announcement comes less than three months after former Ferns captain Abby Erceg announced her retirement from the international competition for similar reasons. 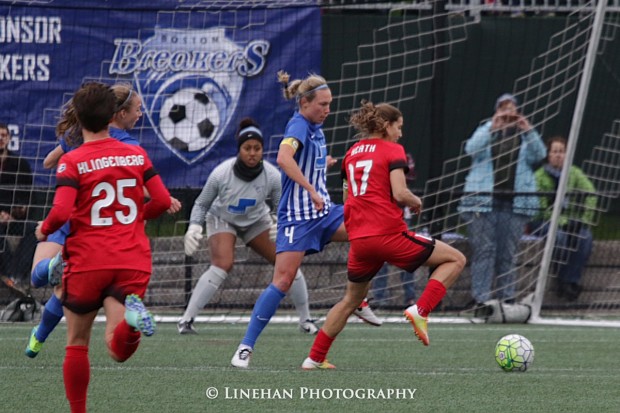 The Boston Breakers announced today that they had officially re-signed goalkeeper Abby Smith to a contract that runs through 2018.

“Abby is one of the best young goalkeepers right now in the country, and she will only get better,” said Matt Beard, Breakers head coach.

Smith came to Boston via the 2016 NWSL College Draft, where she was taken as the No, 27 overall pick. She made her debut in goal for the Breakers on May 1 but only made two appearances for the club before being sidelined with a season-ending knee injury. She has started in all three of the Breakers’ matches so far this season, helping them to a 2-1-0 record and earning her first professional shutout on April 23 against Sky Blue FC.

Smith will be back in action with the Breakers this weekend as they take on the undefeated North Carolina Courage on Sunday, May 7.

Bristol City Women defeated Yeovil Town Ladies, 3-2, with an own goal by Nicola Cousin being the deciding goal.

Manchester City Women drew with Birmingham City LFC, 1-1, in a prequel to the FA Cup Final. Emily Westwood scored the opening goal for Birmingham, and Lucy Bronze scored the equalizer for Man City.

Run of Play: Penalty Kickin’ It
Despite record, Red Stars pleased with start