Tuesday Roundup: Heath, others still out for Thorns

Also in today’s roundup, an injection of cash has woken up Zimbabwe’s domestic league 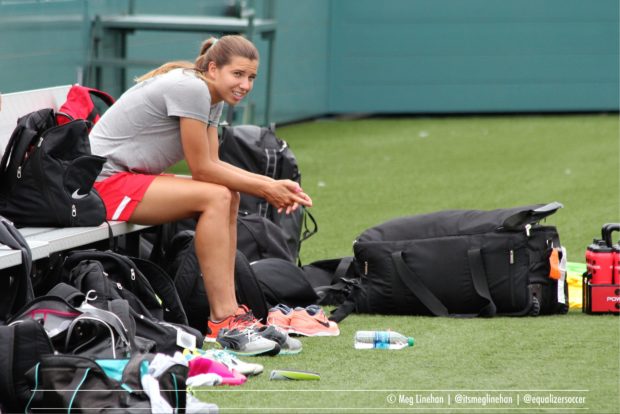 Tobin Heath has yet to play for the Thorns this season due to a balky back. (Photo copyright Meg Linehan for The Equalizer)

Jamie Goldberg of The Oregonian reported on Tuesday that Thorns midfielder Tobin Heath felt pain while attempting to train last week and has already been ruled out of this Saturday’s Cascadia clash against Seattle Reign FC. Thorns coach Mark Parsons told Goldberg he hoped Heath could resume training this week but did not have a timeline for a return to play.

Parsons said that Heath is out for Saturday. He said she felt some pain last week. I’ll post more on injuries shortly #BAONPDX #NWSL

Heath, a finalist for MVP in 2016 and the U.S. Soccer Player of the Year, has not played for the Thorns this season. In early April she was removed from Jill Ellis’s U.S. camp roster because of the injury.

According to Goldberg’s story, three other injured Thorns—Katherine Reynolds, Dagny Brynjarsdottir, and Mana Shim—are all 2-3 weeks away, and Meg Morris remains available for only limited minutes.

On Tuesday, Goldberg also posted a feature on Parsons.

Zimbabwe league to return for 2017 season

Zimbabwe will have a national women’s season in 2017 after going dark the last four years. The Zimbabwean site chronicle.co.zw reported that the country’s national governing body had injected cash into the league. The money originally came from FIFA.

A 15-round fixture schedule has been announced, but no dates accompanied the matchups. Zimbabwe was the under bidder to Canada for the right to host the 2015 Women’s World Cup although the bid was withdrawn before Canada was announced as the winner. Last summer, Zimbabwe’s women qualified for their first major tournament. The team left the Olympic games with three losses but managed to score a goal in all three games—all against Top 10 opposition.

The Kronick Report: Williams blasts her first of 2017
Run of Play: Penalty Kickin’ It