Vlatko Andonovski had seven months to get ready for the return of Amy Rodriguez. And then he had seven days to adjust to life without her again.

“Anytime you lose a player like Amy Rodriguez, you just won’t take it. At the end of the season, we’re still going to be talking about the first game of the season,” FC Kansas City coach Vlatko Andonovski said following his team’s 1-0 loss at Sky Blue on Sunday night.

That first game. Ashley Scoby had a strong review of it, but the Cliff’s Notes version is that Rodriguez and Sydney Leroux returned from a year off to have babies, both scored, and then Rodriguez tore her ACL. The injury took the air out of a record crowd at Swope Soccer Village and the wind out of a Blues’ attack that, at least for an hour, looked much like its old self.

“Unfortunately in the women’s game, we’ve all been part of multiple games where something like that has happened,” Yael Averbuch said. “It just shouldn’t be the case. It’s such a bummer in the game. The fans, too. You could hear the atmosphere in the stadium get real quiet. It’s such a sickening feeling. Then it makes you, for a little bit, think about your own movements. It’s very tough mentally. It definitely affects the game.”

Rodriguez scored in the 48th minute on opening day and was officially subbed off in the 57th. Her team has not scored since. They coasted to a 2-0 win over the Breakers and then dropped 1-0 decisions in Chicago and New Jersey. The two consecutive games without a goal equals a club record. That only happened last season—three times—after Lauren Holiday retired and Rodriguez went on maternity leave. (Leroux was later acquired as a replacement for Rodriguez before joining her World Cup-winning teammate on the maternity list.)

“That’s the challenges that make us or break us, I guess, or shows what we’re made of,” Andonovski, who has repeatedly said 2016 made him a better coach when the team struggled, reiterated over the weekend. “And the players themselves. I took that as a challenge, and I put the challenge on the players as well.”

The Sky Blue match was compounded by the fact that Shea Groom, the third forward, was out with a rib injury. That left Leroux up top in the old familiar 4-2-3-1. The 2—a pair of holding mids that protect the backline and orchestrate the attack, was made possible by the team’s only bit of good injury news this season. Desiree Scott, absent the first two games through injury, returned and teamed with Lo’eau LaBonta. Together Scott and LaBonta filtered much of Sky Blue’s attack to the flanks, where more often than not there were two defenders surrounding the ball.

“They were the keys of the defense tonight. I don’t think anything went through the middle. Even if there was something in front, it was a cross from the side or from a distance. They were very good. They intercepted a lot of balls.” Andonovski though, still had his mind on trying to solve the attacking woes. “Now we’re going to work on what we do when we get the ball in the middle of the park and how we transition forward.”

FC Kansas City will know early in the week if Groom’s rib injury has healed sufficiently enough to get her back on the field Sunday when the Orlando Pride pay a visit to Swope. Watching Scott and LaBonta patrol the defensive midfield makes it easy to think Andonovski will leave them there for the long-term. But that creates a problem. In order to maximize scoring, Leroux and Groom both need to be on the field, and neither of them particularly work as midfielders.

“That’s something that I’m going to be thinking about once I get the results from (Groom)’s doctor’s appointment,” Andonovski said in a valiant attempt to convince me he had yet to ponder his next move.

Averbuch said that while there are always changes, it is not Andonovski’s way to panic or shake things up. “There will always be some tactical tweaks, but along with his even-keeled attitude about a mentality going into things whether we won or lost, Vlatko isn’t one to change things just because of a bad result. He definitely believes in his philosophy and his system and so do we. We’re really bought into it. That’s not to say there won’t be tweaks throughout the season, but we don’t ever really show up and think there will be a major change that we haven’t foreseen.”

Earlier he did hint at a more conservative approach than the 4-3-3 he rolled out in Week 1—at least as the club gets its footing after the shock of losing Rodriguez.

“It is what it is, we know that we have to live without her and adjust. We’re not going to be as aggressive going forward. But at the same time we’re going to be much more disciplined defensively. I’ll say more aggressive defensively.”

As of publish time we don’t know if Groom will play this weekend or if the Blues will stick with two players in the hole. But we do know—as the players attest—that Andonovski will open the week with a positive outlook and will be unlikely to offer up any big surprises. 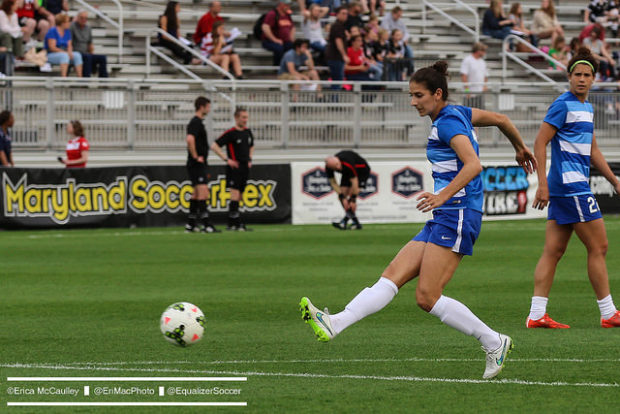 Yael Averbuch is effusive in her praise for Vlatko Andonovski. (Photo Copyright Erica McCaulley for The Equalizer)

“I can’t say enough positive things about Vlatko,” Averbuch, who credits Andonovski with making a smooth transition to central defense when Becky Sauerbrunn left for the World Cup two years ago, said. “Win or lose, really tough result or really good one, he shows up at practice every day with a really positive attitude and he helps us to get better. His approach and the fact that he’s very even-keeled about things throughout the season definitely creates a team culture that is very enjoyable.

“I’ve been part of a lot of teams—teams that have been very successful and teams that have struggled. It’s so easy when the results aren’t coming to be dreading practice and to have a bad feeling around the team, and it was not like that for one second last year in Kansas City. I think that says a lot about Vlatko’s leadership.”

So have the injuries to Rodriguez and Groom—plus Mandy Laddish is out at least another two months and Alex Arlitt is on the disabled list—driven the 2013 NWSL Coach of the Year to change outlook he had three weeks ago?

“Yes, absolutely. I’ve always had the same outlook,” he said, backing up Averbuch’s words on cue. “I think once we get the finesse in the offensive third we’re going to be a dangerous team.”

-My Player of the Week ballot: I had to use the abstain button this week. After spending Saturday at a family event I returned home to find the stream archives out of sorts. Only so much time in a weekend. Sorry NWSL. Players I saw who impressed include Emily Sonnett, Alyssa Naeher, Lo’eau LaBonta, and Kailen Sheridan.

-Player of the Month ballot looks like this: 1) Debinha; 2) Stephanie Labbe; 3) Rose Lavelle

-FC Kansas City really defend impeccably all over the field, but their set piece marking has been a problem dating back to the inaugural season.

-It has only been three games, but you I get the feeling Christen Press needs something to go right sooner than later.

-It has only been three games, but you get the feeling the Orlando Pride need something to go right sooner than later.

-I like Julie Ertz at attacking midfield less if she is always going to be the one to replace a center back as she did Saturday when Sam Johnson had to come off.

-As I read Matt Pentz’s feature on Haley Kopmeyer, two things came to mind. One is that I cannot remember a WoSo club scenario before in which a player sat in another’s shadow and actually emerged as the starter. That’s probably very much a factor of not having a league last more than three seasons until this one. The other thought is that Laura Harvey has openly admitted she was a bit out of her element with the 2013 draft, but snatching Kopmeyer with the penultimate pick (No. 31) stands as one of the great late round picks in the league’s brief history.

-Count me among those who don’t think Ashlyn Harris’s postgame comments are that big of a deal. Part of the real answer is how her teammates, particularly Marta, took them, but I’m all for players expressing their feelings.

Note that the above table represents hard numbers without the context of teams changing venues, individual circumstances that caused inflated or deflated numbers, days of the week, and other factors. From time to time we will take a deep dive into a certain team or pattern. Also please note that attendance tends to grow as summer rolls in.

My only bit of individual analysis today is this. The Breakers’ opening day crowd of 2,329 was nearly 1,000 less than the smallest weekend crowd of 2016. Their general manager, Lee Billiard, reacted to my tweet about it like this:

This weekend’s number was 2,315. Any way you spin it, it’s a low start at the gate in Beantown.

-Kassey Kallman is up to 43 straight matches and 3,870 straight minutes. The latter extends her NWSL record.

-Lauren Barnes and Christine Nairn both started for the Reign on Saturday, no great surprise since each player has mossed only one game since NWSL launched. Both have now made 88 career appearances and lead the way in the #Raceto100 career regular season matches.

-Christie Pearce missed Sky Blue’s win over FC Kansas City, marking the first game since July 11, 2015 in whch she did not start and play the full 90. That’s 30 games and 2,700 minutes. The Sky Blue back four that night, right to left, was: Caitlin Foord-Lindsi Cutshall-Kristin Grubka-Maya Hayes.

-Since I mentioned Haley Kopmeyer becoming the starting keeper in Seattle after being picked 31st, I noticed that she is one of three 4th round picks from that 2013 draft still playing. The others are Jen Hoy and Maddy Evans. Contrast that with the 3rd round where the only remaining active player is Amber Brooks. That too is a bit deceiving since Brooks likely would have gone in the 1st round had she not signed at Bayern Munich.