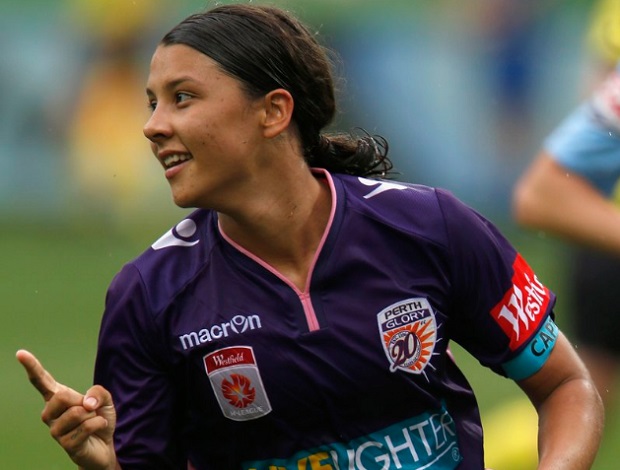 Also in today’s roundup, the USWNT summer tournament looks headed to the west coast, amy rodriguez scheduled for ACL surgery,
the US U-17s bring home a trophy, and Amanda Cromwell shows off her (American) football skills

Sky Blue FC striker Sam Kerr was awarded the Julie Dolan medal on Monday as the Most Valuable Player in the Australian W-League. She beat out fellow NWSL players Jessica Fishlock and Lydia Williams, both of Melbourne City, for the award. Over the course of the W-League season, Kerr scored 10 goals and tallied 4 assists and was voted the Player of the Month by Professional Footballers Australia (PFA) in December. The captain of Perth Glory missed Sky Blue’s home opener on Sunday in order to attend the awards ceremony in Sydney.

“We are really excited for Sam,” Christy Holly, Sky Blue FC head coach, said. “She worked so hard over the last year to rehabilitate herself while coming back from a tough injury. We are delighted to see her hard work and success on the field get acknowledged with such a fantastic award.”

Perth finished top of the table in the W-League and advanced to the Grand Final before falling short of championship dreams in a loss to reigning champs Melbourne City.

Kerr’s presence was sorely missed by Sky Blue on the weekend, but the club battled to a 1-0 victory over FC Kansas City on a late goal by Raquel Rodriguez. Kerr is expected back with Sky Blue in time for Saturday’s trip to Washington.

This summer’s tournament that will put the U.S. against Japan, Australia and Brazil is heading to Los Angeles and Seattle, according to a tweet from Ann Odong at The Women’s Game. Odong tweeted that it looks like Australia will be playing in those two cities in July.

Looks Seattle and LA action for the Matildas in July. Last time they played in Seattle was closed door match v China. LA was 2012.

The tournament, which has yet to be announced by U.S. Soccer, will take place during the FIFA window reserved for the EUROs which run July 16-August 6. NWSL is dark the weekend of July 29-30, which covers the traditional FIFA window for countries not competing in the EUROs.

Presumably a third, as yet unknown city, will also be part of the tournament. Several outlets have the tournament dates as July 27-August 3. That would put the middle match day at July 30 or 31.

A formal announcement is expected soon.
***
It was revealed last week that Brazil has scheduled friendlies against Spain (June 10), Iceland (June 13) and Germany (July 4). The match against Germany will take place in Sandhausen, Germany. There have been no locations reported for the June matches.

ARod to have ACL repaired

Amy Rodriguez is in California, where she was scheduled to undergo surgery to repair her torn ACL on Monday. FC Kansas City Vlatko Andonovki confirmed the news to The Equalizer on Sunday.

Wishing my friend @AmyRodriguez8 a successful & swift surgery tomorrow. Proud to go through this journey w her & providing endless support ?

Rodriguez tore her left ACL in FC Kansas City’s Week 1 victory over the Boston Breakers in which she scored the second goal. It was Rodriguez’s first club match since she sat out all of 2016 to have her second child. She will miss the remainder of the 2017 NWSL season.

The U.S. U-17 national team thumped host Italy, 6-0, on Saturday to win the Torneo Femminile Delle Nazioni. Maya Doms scored twice in short order—in the 25th and 28th minutes—to extend to a 3-0 lead the U.S. would take into half time before adding three more on the back side.

Following a 1-1 draw to Slovenia, the U.S. outscored Mexico, England, and Italy by an aggregate 12-0. Eight different players accounted for the 13 goals, paced by Doms and Godfrey with three each. The entire U.S. roster will be eligible for next year’s U-17 World Cup in Uruguay.

UCLA soccer coach and former USWNT player Amanda Cromwell showed her chops as a kicker when she attempted and converted a point after during a spring football game over the weekend. Cromwell coached one team opposite the school’s gymnastics coach Valorie Kondos.

A video of Cromwell’s attempt, during which Kondos playfully protests, can be seen here.

–Allison Lee contributed to this report