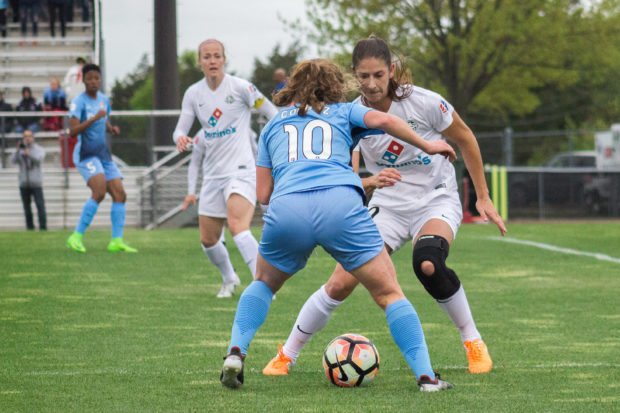 Sky Blue FC earned its first win of the 2017 National Women’s Soccer League (NWSL) season on Sunday night, defeating FC Kansas City for the first time at Yurcak Field by a final score of 1-0. Midfielder Raquel Rodriguez converted the game-winner in the 82nd minute while goalkeeper Kailen Sheridan earned her first professional clean sheet. Although the New Jersey squad made it to the win column, here are a few takeaways from the match:

For those who watched the entire match, it’s safe to say it was not a pretty contest. Even Sky Blue FC head coach Christy Holly admitted afterwards that Sunday’s game was more about getting a win than about performance. Holly was left to make adjustments to the line-up as captain Christie Pearce was out due to being in the league’s concussion protocol, and forward Sam Kerr was in Australia attending the Dolan Warren Awards.

With midfielder Daphne Corboz replacing Kerr up top and defender Erin Simon returning to the starting line-up for the first time since 2016, Sky Blue FC looked out-of-sync at times with players out of position and not transitioning quickly enough with the flow of the game. SBFC struggled to make clean passes into the final third (this also could have been a result of the team not adjusting to the wind enough), but when a successful ball was played through, there were many instances where the forward or a lone midfielder would be left with little to no support and a numbers down situation. Give credit to FC Kansas City for doing a great job of getting numbers behind the ball on defense, but SBFC was most successful when the entire team shifted to provide support on offense and help balance the field.

A big area that lacked in providing support consistently in the offensive third was central midfielder, patrolled by Rodriguez and Sarah Killion. Both players did a better job of keeping position in the defensive and middle part of the field and building up into the attack. However, they had a tendency to sit too far back in the run of play, creating a gap in the middle of the field that FCKC was able to control for the majority of the match. When Rodriguez or Killion pushed up more, Sky Blue created more dangerous chances. Part of the reason Killion especially could have been sitting further back was to provide additional help for the young backline, but it wasn’t until the final 15-20 minutes of the game these two got more involved higher up the field, and Rodriguez was able to secure the win.

The decision-making did improve in the second half as the New Jersey squad was able to maintain possession more when getting into the final third rather than forcing passes or not switching the point of attack quick enough. Sky Blue FC ended the match with eight shots, their lowest shot total recorded for a single game so far this season. It will be interesting to see how Holly adjusts the midfield/forward line next week when the club faces the Washington Spirit and Kerr is said to be available.

Defender Erica Skroski was the oldest member of the SBFC backline on Sunday at the ripe old age of 23. With Pearce out for the match, Sky Blue FC played a full 90 minutes with three rookies (Sheridan, Kayla Mills and Mandy Freeman) and second-year players Skroski and Simon. The group as a whole still needs to work on keeping their defensive shape and not being exposed on the weak side, but that should come with time. However, a big takeaway from the match is that Sky Blue FC will be in good hands when Pearce retires.

Skroski was shifted back into her more familiar position of center back, and right from kickoff, it was evident how comfortable and confident she was playing in that role. Skroski read the game extremely well and was constantly in position to break up plays and get the attack going again. She also worked well with Freeman, who also had a solid game and had the assist on the lone goal.

The defensive line still needs work on maintaining the strong shape that Holly is trying to instill, as well as their field awareness and communication. At times, Sky Blue FC was caught too spread and left holes wide open, particularly on the weak side. Late in the match, FCKC almost scored off a corner kick as defender Becky Sauerbrunn moved into the box and no one picked her up to mark. She was given a lot of time to settle and get a shot on frame, but if she were a more prominent goal scorer, who knows if Sheridan would have been able to make a save and secure the shutout.

The young backline did have their mentor present for the contest, but from the sideline instead. Pearce has mentioned before that coaching could be in her future, and she was providing guidance throughout the match.

“Christie is the most unique leader that I’ve probably encountered,” Holly said. “As soon as players walk into the locker room, she’s there talking to them. She’s not telling them; she’s giving them suggestions and communicating with them in a fantastic manner, so it’s like she’s there anyway.”

Could this be a sign of what is to come after the 2017 season?

Sheridan was a steal in the 2017 NWSL College Draft 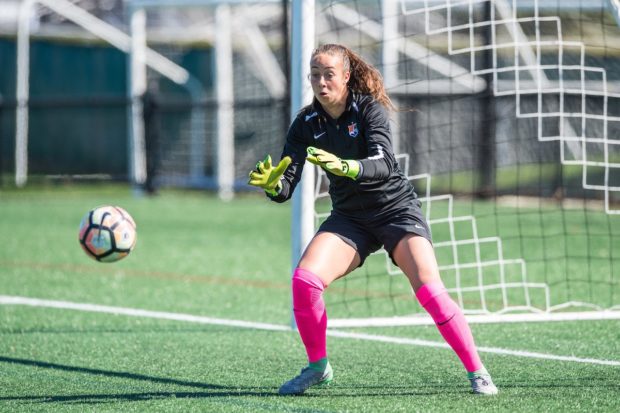 Sheridan may be young, but she has the confidence of a veteran, which is always great to have in a goalkeeper. She comes up big when needed, communicates constantly with the rest of the squad, and has a strong foot to boot. She still needs to work on her decision making and distribution out of the back; several times she put herself and the team in a preventable situation. As Holly joked after the game, Sheridan sometimes “think she’s Pele,” but doesn’t want to discourage her style of play. Overall Sheridan has been fun to watch over the past three weeks of NWSL action, and has the potential to develop into one of the top netminders in the league.