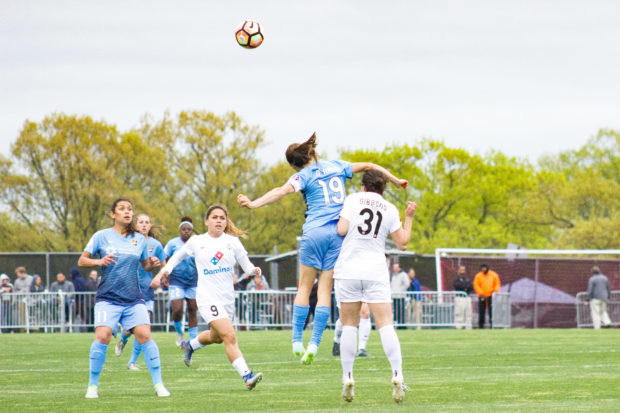 Despite an equal battle in the middle of the park, Kansas City had the best chances of the first half, including a 1v1 contest in the 36th minute between Kansas City’s Brittany Ratcliffe and Sky Blue keeper Kailen Sheridan.

In the second half, Nicole Barnhart made an excellent save on a shot from Daphne Corboz in the 78th minute to keep the game scoreless. Corboz and Kelley O’Hara worked a nice give-and-go to set up the chance:

However, the breakthrough finally came in the 83rd minute. Some suspect set-piece defending from Kansas City left both Mandy Freeman and Rodriguez open in the box on an O’Hara corner kick. Freeman was able to collect the corner and tap the ball to Rodriguez, who hit it in the back of the net to give her team the 1-0 lead.

FC Kansas City nearly found an equalizer in the 88th minute, but the play was called offside:

Next up for Sky Blue FC is an away date against the Washington Spirit next Saturday, while FC Kansas City returns home to host the Orlando Pride on Sunday.