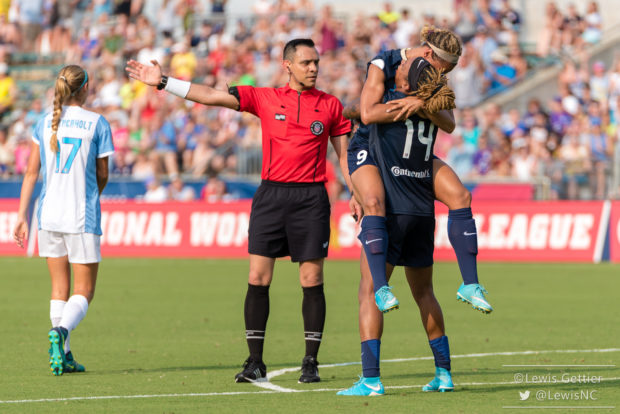 The North Carolina Courage continued its winning streak through Week 3 as it downed the Orlando Pride, 3-1. Jess McDonald, Sam Mewis and Lynn Williams all scored for the Courage, and Brazilian-international Camila scored for the Pride. It was the first goal of 2017 for each of the four scoring players.

Before the game, the Sahlen family presented NWSL Championship rings to the Courage players (and Alanna Kennedy, who was traded to the Pride during the offseason) who won last year’s championship with the Western New York Flash. While many fans and critics debate over whether the Courage are truly a new team or simply a rebranded one, the product on the field is much the same, just in a new package. The Courage once again used their speed, athleticism, and grit to get the win and resulting three points.

The Courage’s first goal came in just the 6th minute after Lynn Williams put a shot on target that was stopped by Pride goalkeeper Ashlyn Harris. Harris was unable to collect the shot though, and Jess McDonald was there to capitalize, sending the rebound past Harris and into the net.

Camila would strike next for Orlando, driving the ball down just right of the middle, with time and space despite two defenders staying with her. The lack of strong defensive pressure allowed Camila to fire off a rocket from the top of the 18, splitting the defenders and curling the ball just out of Sabrina D’Angelo’s reach to level the score.

27' GOOOAAAL! What a strike from Camila! A curling right footer from 18 yards out equalizes for the Pride! #NCvORL | 1-1 pic.twitter.com/HcChbguf62

It would only take five minutes for the Courage to regain the lead after Laura Alleway was called for a handball in the box, resulting in a yellow card for Alleway after some words with the referee and a penalty kick awarded to the home side. Sam Mewis stepped to the spot and converted, putting the Courage up two goals to one.

Orlando appeared to have answered in the 39th minute when Jasmyne Spencer crossed to Marta, who nearly put it past a diving D’Angelo. D’Angelo was able to just get her body on Marta’s shot to slow its momentum while Abby Dahlkemper ran in and cleaned it up with a goal-line clearance. Marta thought the ball had fully crossed the goal line for a goal, but the line judge disagreed and ruled it a save.

The second half saw a number of chances for both sides, but each team’s goalkeeper was able to prevent the scoreline from increasing despite close calls from both teams in the opening minutes of the half.

Lynn Williams became her most dangerous in the second half, using her speed and athleticism to create a number of opportunities on goal. If her finishing was better, she would have scored multiple goals against the Orlando’s incohesive defense. Her first opportunity came just two minutes into the second half, when she beat former teammate Alanna Kennedy to get 1v1 with Harris, only to be denied by the keeper coming off her line and making an impressive kick save. Although the ball remained in play and was soon headed on target by Debinha, the shot was deflected out and the Courage were awarded a corner kick.

Williams nearly scored again just moments later after receiving a high ball and using her body to shield off a defender to win the ball, maintain possession, turn and fire off a shot, but the ball sailed just high of the crossbar. She would finally score in the 70th minute after Harris’s attempt to clear the ball was easily intercepted by Debinha and sent to Williams, where she stood unmarked in front of the goal. Williams managed to fire off a shot, splitting two defenders as they came crashing into each other in front of her, and the ball took a friendly deflection off the far post to go in for the Courage’s third and final goal of the match.