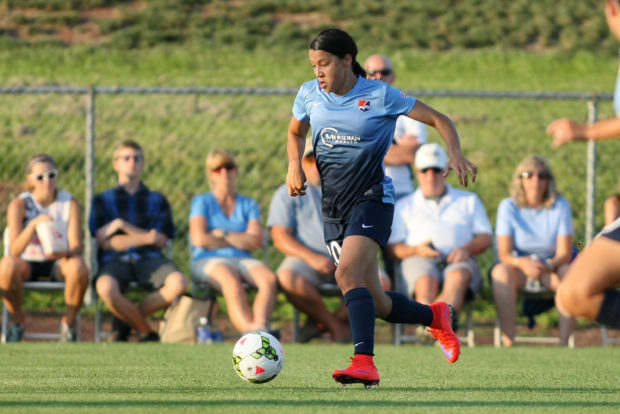 Sam Kerr, Christie Pearce, and Shea Groom will be absent for Sky Blue FC and FC Kansas City respectively this weekend as their clubs compete against each on Sunday, but for fairly different reasons.

Sam Kerr will notably be absent for Sky Blue FC this weekend as she is on her way to Sydney to attend the Dolan Warren Awards which are the year end awards for the W-League in Australia. Kerr, who won the award for Best Forward, finished the W-League season with 10 goals and four assists for Perth Glory.

BEST FORWARD | @PerthGloryWomen captain @samkerr1 was in the thick of everything from creating chances to finishing off attacks. pic.twitter.com/6TngnpKt9T

Pearce will be missing her first NWSL league game in almost two years due to NWSL concussion protocol. The captain was placed on concussion protocol after the club’s 1-0 loss to Boston last weekend although there were no initial indications of a concussion during the game. The last match NWSL match that Pearce missed was due to the 2015 FIFA Women’s World Cup in Canada. She played every single minute for the New Jersey club in 2016.

Groom has been ruled out for at least one match with a rib injury, meaning she not be playing with FCKC this weekend against Sky Blue. The injury hits keep on coming for Kansas City who. among others, are dealing with Amy Rodriguez’s ACL tear from game 1 that will sideline her for the entirety of the season.

Earlier this afternoon, Glasgow City FC announced the signing of Scottish midfielder Leanne Crichton via Twitter. Crichton previously played for Notts County in the FA WSL in England until the club folded last week just ahead of the start of the spring season. She joined Notts County from Glasgow City at the beginning of 2015.

SIGNING NEWS | We are thrilled to announce the signing of Scottish international Leanne Crichton from Notts County. Welcome @crichton7 pic.twitter.com/hVsS0qgGwF

Initially, it was unclear if the Notts County players would be able to re-sign elsewhere since the transfer window had closed, however, as of yesterday, the English Football Association granted Notts County Ladies players the right to transfer to other clubs.

The 29-year old will turn her focus to club play for Glasgow City this spring as well as training with the Scottish national team ahead of this summer’s 2017 European Championships set to kick off in July. Crichton has 38 appearances for her country to date.

NWSL games will now be available on the go90 platform via app and desktop.

Today, the NWSL announced that all NWSL games streaming on the go90 app will also be available on their website, go90.com. The addition of a desktop experience will give many fans some relief as there was difficulty watching games that were limited to mobile and tablet devices only, or an over the top device like a Chromecast. Now, fans will be able to access all games that will be streamed via the go90 platform on either desktop or mobile.

Live Streaming Update: All #NWSL games on the @go90 platform are now available via both go90 app and go90 website https://t.co/UEKQQj1hjT.

We present to you our 2017 home jersey, presented by @HMHNewJersey! pic.twitter.com/9mwcJqcvI7