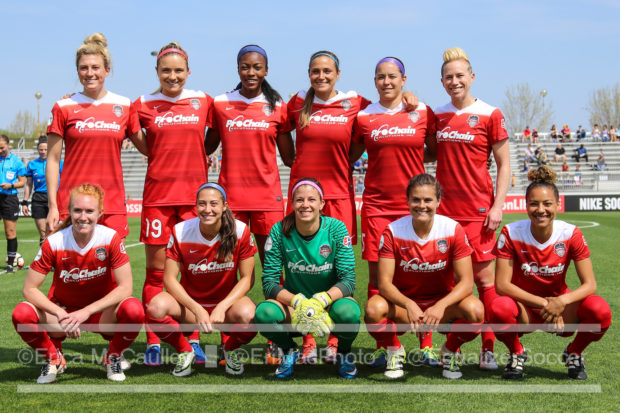 The Washington Spirit players have launched a new blog called Beyond Our Boots. (photo copyright EriMac Photo for The Equalizer)

There was less drama in Week 2 of the NWSL, but when is WoSo ever fully without drama? Players get benched, teams lose, and people’s favorites lose out on goal or save of the week. So, let’s put a little more positivity into our lives. Here are three stories that highlight some of good things going on around the league.

Spirit players launch Beyond Our Boots

Soccer is one of the most popular sports around the world, and it’s not just because of the goals or the saves or the drama that can play out on the pitch. It’s largely because of the people with the balls at their feet–the players themselves.

Most soccer fans have at least one team that is “their” team, even those who don’t live anywhere remotely near a team. And almost every fan has a favorite player. We may be a fan of what that player does on the field, but often times it’s as much about who the player is off the field as it is on the field. We feel connections to them, feel like we know them, can relate to them, and often those are the players whose names adorn our jerseys.

But when it comes down to it, how well do we actually know those players? In reality, not very much for most of us, but one team has decided to change that.

Last Thursday several Washington Spirit players launched Beyond Our Boots, a blog by the team and for the fans. It’s a new, different way for the players to engage and interact with fans by writing articles, posting videos, and giving more of a behind-the-scenes look at the players and the team itself.

“We were like, ‘Let’s  somehow give fans a little bit more of us,’” midfielder Tori Huster, one of the brains behind the blog, said. “I think particularly here at the Spirit, people talk about last season and the transition in the off-season, you know, but not too many people know us as individuals, as individual players, but more as a group.”

Since the players have total control of the site, they are able to show off their personalities in a truly authentic way. This will allow fans to get to know their true personalities, from the serious to the hilarious. Probably the most popular piece on the site right now is an article detailing an elaborate prank the team veterans pulled on some of the newer players before their first “business trip.”

Although Beyond Our Boots is being spearheaded by Huster and Katie Stengel, the blog will continuing growing into a full-on team effort, with individual players being highlighted and contributing as they are. Huster said they plan to announce player spotlights in which the featured player can do with the site what she wants, whether it’s writing an article, chronicling her day in a photo series, or just posting a video.

The blog also currently includes weekly columns like Manic Mondays featuring the team’s Wall of Shame, Train-worthy Tuesdays showcasing the team’s carpool karaoke skills and Thursday Truth or Dare, where fans can submit their PG-rated questions or challenges for the players to complete.

While the site is meant to be fun and lighthearted, it also has a serious side, as Huster said it is also a way for the players to give back to the league even more so than they already do on the pitch.

“We always brainstorm how can we make things better, how can we keep this league sustainable from our end, I think it’s a group effort, right? It’s the owners, it’s the players, it’s the coaches, it’s the front office of the NWSL, it’s you guys as the media, the fans–we all have to put in what we have to in order to keep this thing going and keep it alive and well for the next generation, so I think that really that was more of our take,” Huster said.

For more from the women of the Spirit, check out Beyond Our Boots or follow them on Twitter (@BeyondOurBoots).

Welcome to the family, Brooklyn ? You’re the best snuggler a girl could ask for! #fosterpup

The internet started buzzing a few days ago when Kelley O’Hara posted a picture snuggling a dog on Instagram. Turns out, O’Hara is not the only foster mom, but her entire household of Sky Blue teammates has taken in the rescue dog.

Many of the roommates–O’Hara, Sam Kerr, Nikki Stanton, Taylor Lytle and Sarah Killion–have pets of their own, and the idea to foster an animal during the season came from Stanton missing her pets back home.

“We all have dogs at home and we all are like pretty obsessed with them and we’re used to that constant affection from a dog,” Stanton said. I mean, it’s hard. We’re away from home, away from our family, away from our pets, so we thought we’d [foster].”

After finding a rescue organization of their liking, the players filled out an application and submitted to background checks. Once they had been approved, a worker with the animal shelter contacted the players to tell them she thought they had a match.

“She was like, ‘We have just the dog for you. Her name is Brooklyn, she just had puppies a few months ago,’ and we went and visited her and fell in love immediately. So she was like, ‘So let me know when you make your decision,’ and we were like, ‘We know. We want her now. Give her to us.’”

beach walks with the fam ?

It does seem to be a match made in heaven. According to Stanton, the pit bull mix has seamlessly become a part of the family, greeting them when they get home from training, snuggling with the women on the couch, going for family walks on the beach and swimming in the ocean. And while the players are giving Brooklyn a home outside of a shelter until she gets adopted, Stanton said she’s doing just as much for them as they’re doing for her.

“I know they said that we’re helping the dog out, but our house is just the best, coming home to this dog sitting there wagging her tail. She is like the sweetest, most affectionate, cuddliest dog I have ever met. It’s crazy with her background that she is like that…but she’s so trusting and friendly.”

Hopefully the attention Brooklyn is getting on the players’ social media account will help her, and other dogs from her shelter, get adopted. As is, it looks like there’s a very good chance she may have already found her home.

“Honestly I send my mom photos and videos every day saying, ‘Mom, can I get her?’ so I wouldn’t be surprised if I ended up adopting her,” Stanton said.

With the NWSL draft being held in January and preseason starting in March, many young newcomers to the league are unable to finish their college degrees before starting their professional careers. Erica Skroski was fortunate enough to be drafted by Sky Blue, so she was able to attend classes at Rutgers to graduate on time. Some players take online courses during the season to complete their degrees, while others race to complete practicums and internships during the offseason. Although it’s only a few players every season, some put off the NWSL for several months in order to finish college first, as Rachel Hill and Tyler Lussi are currently doing. Even older professionals have to try to earn undergrad and advanced degrees around their professional soccer careers.

Enter the Boston Breakers, who announced on Monday a higher education partnership with Southern New Hampshire University. While the partnership is mutually beneficial in that SNHU students will have easier access to internships with the Breakers organization, the part of the deal that stood out the most is the opportunity it presents the Breakers players and staff to pursue advanced degrees more easily while continuing to play professionally. With undergraduate and graduate degrees, as well as graduate certificates, in fields like Athletic Administration and Sport Management, the university provides excellent options to athletes who want to pursue careers in addition to our outside of coaching.

While many teams provide assistance in helping their players complete their degrees, find offseason jobs and earn their coaching licenses, helping to prepare them for a life after their playing days are over, the Breakers organization has taken it to the next level. Hopefully we’ll see more teams follow Boston’s example.