Joanna Lohman had surgery Thursday to repair her torn ACL

Joanna Lohman underwent surgery Thursday to repair the ACL she tore during the Washington Spirit’s opening match of the season. Lohman went down on her own accord trying to defend a play that ended up as the only goal of the day for the North Carolina Courage. She returned to play a few more minutes on the injured knee before being subbed out for good.

Lohman appeared in every regular season match for the Spirit in 2016 plus the semifinal. In a cruel finish to the season, she was left out of the starting lineup for the NWSL Championship when Jim Gabarra ran out a 3-5-2 and then lost her chance to be a substitute when Caprice Dydasco tore her ACL in the 1st half. Dydasco recently tweeted that she has been cleared to play again.

Andressa trained with the Dash on Tuesday, three days after being forced to miss the team’s trip to Seattle through injury. Morgan Brian, who has not played since being pulled from U.S. camp, did not. The status of both players was reported by Corey Roepken of the Houston Chronicle who attended the training session.

Andressa is training with the Dash this morning. Morgan Brian is not. Both missed last game with injuries.

The Dash won their opening match over the Red Stars without Brian in midfield. Last weekend they lost Andressa (hamstring) and Janine Van Wyk (flu) and were pounded, 5-1 in Seattle. They will visit the Spirit on Saturday. The Dash are 0-0-4 all-time at the Maryland SoccerPlex. There was no immediate word as to the availability for either player for the match.

Yes! Allowed to play again! Great work from the @PFA here. All the PFA’s having mine and my teammates backs lately ? https://t.co/x59D6iscPa

The English Football Association has granted Notts County Ladies players the right to transfer to other FA WSL teams, news that will be a welcome relief after the club dissolved literally on the eve of the league’s spring season. The short-term fate of the players had been in limbo since the transfer window in England has closed.

“Players are now in a position to sign for new clubs in England,” a portion of an FA statement read. “They may also move to leagues in other countries where the transfer window is open.”

The transfer window for players to join NWSL runs June 5-July 5. Any player wishing to sign with an NWSL club would have to wait for that window to open before arriving.

The French players union, UNFP (Union Nationale Des Footballers Professionanels) announced four finalists for Player of the Year. To the surprise of no one, Lyon and Paris Saint-Germain players account for all four nominations.

Lyon is represented by Dzsenifer Marozsan and Eugenie Le Sommer, while PSG hopes ride on Shirley Cruz and Cristiane. Cruz is familiar to CONCACAF fans as one of the stalwarts of the Costa Rican national team. Maroszan is German and Cristiane is Brazilian, making Le Sommer the only domestic player on the list.

Lyon and PSG will be battling for much more than season awards over the next several weeks. Lyon has virtually locked up the French league after a recent string of poor results from PSG combined with a points deduction from earlier this season for a lineup glitch. They will, however, play for the French Cup on May 19. They are also leading their respective UEFA Women’s Champions League semifinal ties with the second legs at home against Manchester City and Barcelona respectively. The final is June 1.

The Washington Spirit have signed forward Crystal Thomas and the Georgetown product should be available for Saturday’s match against the Houston Dash. A native of Elgin, Illinois, Thomas was undrafted out of Georgetown but went to preseason with the Spirit and, though she did not make the club, did enough to remain on the radar. 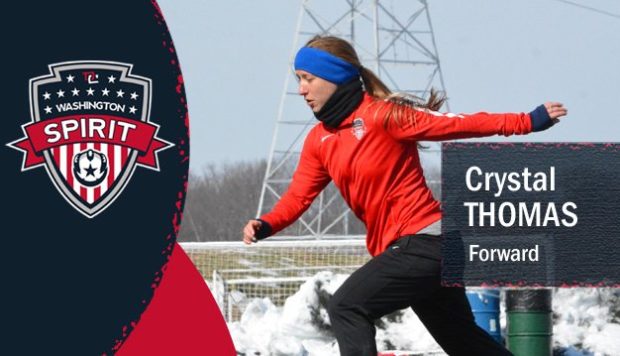 Crystal Thomas braved the cold of preseason and two weeks into the regular season, has a contract to play for the Spirit.

“Crystal came in from day one of preseason and has provided a good energy and high level of intensity to our team,” Jim Gabarra, Spirit head coach and general manager, said. “She offers a lot of good attacking qualities as well as an understanding of our style of play.”

The Spirit lost Joanna Lohman for the season but have also been hit hard up top as well. Cheyna Williams is out for the next few weeks with a muscle strain, and a bone bruise will cost Katie Stengel at least this weekend.

Thomas transferred to Georgetown after starting at Notre Dame. Her goal in the quarterfinals of the 2016 NCAA tournament sent Georgetown to the College Cup for the first time.