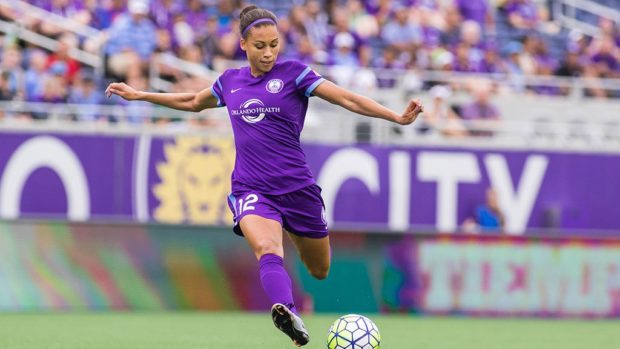 Kristen Edmonds, who started all 19 times she appeared for the Pride last season, is looking forward to this week’s test against an undefeated North Carolina Courage.

Kristen Edmonds, a mainstay in the Orlando Pride midfield since early last year, and her teammates have had a world-wind first few weeks of the season. Nothing like a home opener in a brand new stadium in front of over 14,000 fans or the addition of arguably the best soccer player of all time joining your squad. And it’s only Week 3. I chatted with the NJ native and Rutgers alum about how this has all been so far, what it’s like to play in Orlando, her experience in USWNT camp and more!

Hannah Kronick: Saturday was a pretty exciting day. It was your first game in the new stadium, Marta’s debut, your team’s first Lifetime game, and a late goal salvaged a point against the Spirit. Do you mind talking a bit about that?

On Marta. Having Marta here obviously helps us a ton. She is super down to earth, awesome to play with and train with and she is just a really great person to have around the team. She’s really funny- in training every day she’s always making people laugh. She also brings a ton of quality to the field as well. It’s always a plus when you have someone of her caliber on your team. We are very excited to have her here with us.

On the tie against the Washington Spirit: Our first game in Portland didn’t go so well, so we were looking to improve upon that. We had a pretty long preseason – and a few of our national team players were taken away from us for a bit of time that happened to be right before the season started. So, leading up to the home opener, we had everyone together with an entire week of prep before that game. And I think that it showed. From our first week to our second week, we saw a ton of progress and scored our first goal. Everything is looking like it’s starting to come together and even though it’s early in the season, it was a good game for us to build off of moving forward.

{MORE:  The Kronick Report: Rapinoe’s golazo  |  Run of Play: You want me to play where?}

HK: What’s the mindset going to North Carolina this weekend and still looking to get that first win of the season under your belt?

KE: They’re the reigning champs and it’s always going to be a battle against them no matter what as everyone is chasing what they did last season. Our goal is to go there and give them a game. We definitely want to come out with points. With the quality that we’ve added, with Marta being here, we think we have weapons that can get us a W. If we can get it against this team, it will also show the league, that we’re here and we’re ready to compete.

HK: What it’s like to play in Orlando for the second straight season?

KE: I love being in Orlando. The community gives us 100% support. Our coaching staff is awesome and our team is cool – everybody’s great. It’s a fun city to play in and be apart of. Getting to play in that stadium is awesome. It’s every soccer player’s dream to be able to play in a soccer-specific stadium like that in a city like this with fans like we have. I definitely love it here. We have a really good shot this year at going really far and making the playoffs, so I think it’s going to be a really good year for us.

HK: You’re in your fourth year in this league. Where do you see it in five years? What do you hope to see in the future of the NWSL?

KE: I hope to see the league continue to grow. When Orlando came into the league, we set the standard for where the clubs should be. Any other team’s that join the league likely going to follow what we do down here in Orlando – the growth of the women’s game and the growth of fans will help more club’s be able to join the league as overall interest in women’s soccer grows. I see the league getting bigger. The Lifetime deal and go90 app have made it really easy to watch games. It’s a good start and I think in the next 3-5 years, the league is going to grow exponentially. So I am really looking forward to that.

HK: With your experience playing overseas, what would you say stands out to you as key differences between the NWSL and various leagues overseas?

KE: The speed of play is definitely a lot faster here in the states than it is overseas. That’s probably the biggest thing. Also, the competition from team 1 to team 10 is a lot stronger here as well. Overseas, you maybe have the first 3, 4, or 5 teams in each league that are really competitive but, here the first place team could play the last place team and anybody could win.

HK: In October you had your first call up with the USWNT and then were in camp again this past January. Can you talk a little bit about what that was like?

KE: Honestly, my first call up in October was a complete shock. I thought it was a prank – I honestly thought someone was pranking me. After the shock, I was over the moon. I couldn’t believe it. It was something I have been working towards for a very long time. I am very grateful to put the crest on and train with the ladies on the national team. In my first two camps, I learned a ton and I am really excited to bring that into the league because the pace is a lot faster, the competition is a war – everyone’s fighting for something. It was an amazing experience and I hope to get another chance. I am still trying to improve my game so that hopefully one day I can wear that crest on the field and get a cap.

HK: What was the #1 takeaway from USWNT camp?

KE: It’s really just small things – positioning, what to look for when. It’s a lot of little things that make the biggest difference. Being able to learn from someone like Carli Lloyd – Ashlyn [Harris], Ali [Krieger], and Alex [Morgan] helped me a ton while I was there – who have been there for a while to help me tweak my game here and there is so helpful. And the little things really go a long way. I am definitely now working on those every day in the NWSL season.

HK: What can we find you doing when you’re not playing soccer? What are some of your hobbies or things that you’re super into in your free time?

KE: I am an animal lover and I just adopted my first puppy. I volunteer with one of my teammates Jasmyne [Spencer]. We’ve been volunteering since our Flash days. Last year, we decided to volunteer at a dog shelter and foster puppies. This season a foster opportunity came up during preseason but I thought I didn’t want to have a dog yet, that it was too early and I wanted to wait until later in the season. But, I fell in love and now I have a puppy. So she takes up a lot of my down time. I grew up with dogs my whole life and was looking to get one this season and she just kind of fell in my lap!

Kristen Edmonds and the Orlando Pride look for their first win of the season as they take on the North Carolina Courage on Saturday, April 29 at 4 p.m. ET at Sahlen’s Stadium at WakeMed Soccer Park.