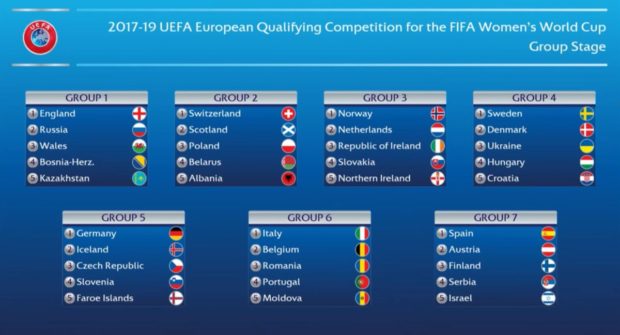 Also in today’s Roundup, the Spirit get news about injuries, Foudy and Press will feature at ESPNW Summit, Sky Blue will field a reserve team, and Karen Carney is honored at Buckingham Palace

UEFA, the only federation to hold a proper World Cup qualifying process for women, made its draw on Tuesday for the double round-robin group competition scheduled to open September 11. The 37 teams were drawn into seven groups, two of which have six teams and the rest five. The seven group winners qualify for France 2019.

The eighth spot will go to the final side standing after a four-team playoff consisting of two, two-leg series. The four teams will be the four best runners-up with the catch that only results against the top four finishers in each group will count. Group play is scheduled to conclude September 4, 2018, with the playoff ties to take place in October and November of 2018. France has already qualified as the host nation and is not included in qualifying play.

The deepest group appears to be Group 3, where 2015 knockout participants Norway and Netherlands are joined by up-and-coming Ireland. Group 6 appears to be the weak link. Italy and Belgium will be favored against Romania, Portugal, and Moldova, but none of the five were at Canada 2015 or any World Cup since 1999.

The UEFA World Cup Qualifying groups, in order of official world ranking, are:

The Spirit have been beset by injuries in each of their first two matches but appeared to get some good news Tuesday on two fronts. Steven Goff of The Washington Post tweeted Tuesday that the injury to Katie Stengel appears to be a bone bruise. Stengel has been ruled out of Saturday’s match against the Dash but is not expected to be sidelined long-term. The injury happened when the Pride’s Jamia Fields tackled Stengel from behind on Saturday.

Officially cleared to play and can't be any HAPPIER & GRATEFUL! Thanks to Fysiotherapie Hawaii,@Pjsoubrier and @novacare for getting me back

Also Tuesday, Caprice Dydasco tweeted that she has been cleared to play. The defender suffered a torn ACL in last fall’s NWSL Championship and has made a speedy recovery. It was not immediately clear if being cleared meant Dydasco would be available this weekend or a return to no-limits training. Spirit coach Jim Gabarra told The Equalizer last week he was expecting her back sometime next month.

Already in 2017 the Spirit have lost Joanna Lohman for the season with a torn ACL tear and Cheyna Williams for at least a few weeks with a muscle strain. Both of those injuries happened on opening day.

ESPNW will host its second annual Women + Sports Summit on May 3 in Chicago, and Red Stars’ forward Christen Press and former national team captain Julie Foudy will be featured.

Hey @JulieFoudy you down to hang May 6?#SockTalk, a private event with Foudy, is coming to Toyota Park.
Tickets | https://t.co/x3LeYUAmnX pic.twitter.com/LtUemuR3lF

Foudy will be an integral part of the day beginning with an (optional) 5k run, and she will moderate several panels. There will also be several opportunities to have Foudy sign her book, Choose to Matter, which is scheduled for release one day prior. Press will be part of a panel discussion titled Body Image Issues for Women in Sports. Press appeared in ESPN The Magazine’s Body issue last year.

Three days after the Summit, May 6, Foudy will host a special SockTalk at Toyota Park in conjunction with the Red Stars match against the Houston Dash.

Sky Blue FC announced on Tuesday that New York Surf Soccer Club will serve as the team’s official reserve side and will play in United Women’s Soccer (UWS), whose season begins next month. The Surf will play home matches at Reinhart Field on the SUNY Maritime campus in the Bronx. 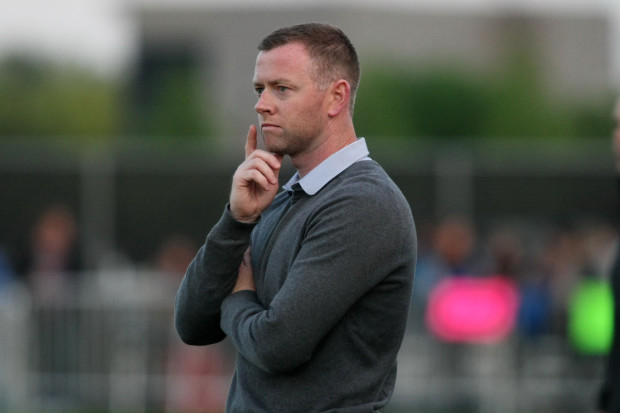 Christy Holly will have an official reserve team at his disposal this summer (photo courtesy: Sky Blue FC)

“We are very excited to add this level to the developmental pyramid of our club,” said Christy Holly, Sky Blue FC head coach. “The addition of an amateur reserve team presents an incredible opportunity for players who aspire to compete at the professional level. The alignment and shared philosophy between Sky Blue FC and NY Surf also allows a consistent learning curriculum for all of the players who are developed within this system.”

The Surf will open play May 14 against a name familiar to all women’s soccer fans—the Western New York Flash. After the NWSL side was sold to become the North Carolina Courage, Flash ownership elected to keep the brand alive by fielding youth programs and entering the Flash in UWS.

England veteran Karen Carney was at Buckingham Palace on Tuesday, where she was officially appointed Member of the Order of the British Empire (MBE) for her services to football. Carney, who plays for Chelsea, joins her coach Emma Hayes, who was recently appointed MBE as well.

What an amazing day to receive my MBE at Buckingham Palace #blessed ?

The Kronick Report: Rapinoe rockets her 17th Reign goal
Run of Play: You Want Me to Play Where?