In week 2 of NWSL action, let’s take a look at a stellar volley, an inside-the-six header, and a perfect midfield-forward combination all resulting in back of the net finishes. 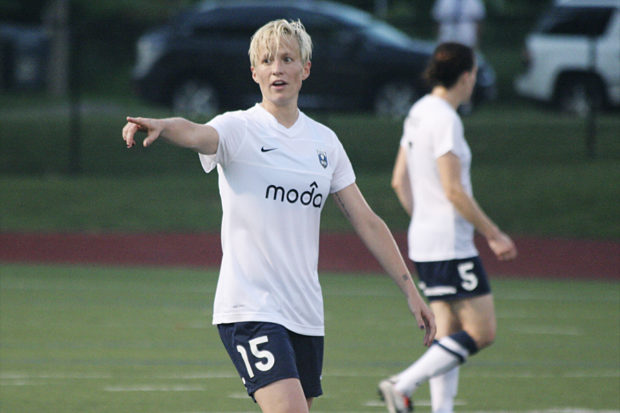 Megan Rapinoe gets on the scoreboard in the 27th minute as Seattle beat Houston 5-1 on Saturday night. (Photo Copyright Meg Linehan for The Equalizer)

What Happened: In the 27th minute, Megan Rapinoe locked in goal number two for the Reign in their 5-1 rout of Houston on Saturday night. Jess Fishlock launched a ball to Rapinoe out on the left side and Rapinoe needed only one touch to fire a volley into the back of the net.
How It Happen: Fishlock got the play started by launching a fantastic long ball to Rapinoe, streaking down the left wing. Rapinoe was ahead of the play- meaning she was proactively making a run into space before the ball left Fishlock’s foot. The ball, played into the right position for Rapinoe to run on, took one bounce before Rapinoe rocketed a volley into the back of the net. Rapinoe’s ability to take the ball off the bounce and then put it on net first time was key here. Although she had her defender Poliana  beat with her run, the bounce gave the defender time to catch up. If instead Rapinoe decided to take a touch to control the ball, there’s a chance the defender would’ve had time to slow her down and cut off her angle. By hitting it first time, Rapinoe capitalized on the tiny bit of space she still had in front of Poliana. She had good composure on the ball and patiently waited to get in the right spot instead of rushing as the defender closed. Then, she rocketed her shot with her left foot. She landed on her shooting foot too, striking through the ball to ensure she hit it hard and kept it low. Goalkeeper Jane Campbell had no chance.

27′ @mPinoe with Seattle’s second goal of the night. Goal No. 3 coming up. #StayTuned #SEAvHOU pic.twitter.com/EaSnBYzYKZ 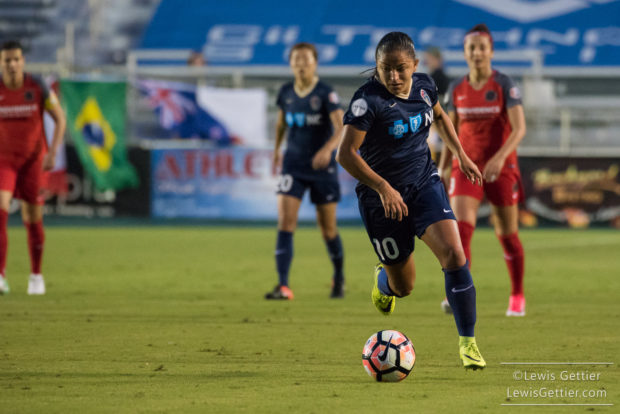 Debinha, doing her thing for the Courage in their home opener (photo copyright Lewis Gettier)

What Happened: Off a Jess McDonald cross, Debinha uses her head to net her first-ever NWSL goal as the Courage defeat the Portland Thorns in their home opener.

How It Happened: A lot of credit for this goal has to go to Jess McDonald. As she receives a great one time through ball from the midfield, her awareness on the ball allows her to recognize that none of her teammates are in the area. She slows down, before taking the ball end line and whipping in a strong cross. The pace on the ball keeps Portland keeper Adrianna Franch on her line, unable to come off and claim it. Debinha’s run inside the box on the opposite side starts while all eyes are on McDonald. She times her run perfectly so that she’s at full speed inside the six right when the ball comes from McDonald.

“I was trying to serve Lynn Williams but Emily Menges their center back cut that pass off from me,” McDonald told The Equalizer. “So I had no choice to play the ball that I did to Debinha. She times it really well.”

The late run from Debinha into in the box is really dangerous because not only does she have the momentum, but she also came in unmarked. She then uses this momentum to blast the header into the back of the net.

What Happened: In the 37th minute, a Natasha Dowie strike from a Rose Lavelle pass put the Breakers ahead of Sky Blue which went on to be the only goal necessary in securing their first win of the season and their first win since August of last year.
How It Happened: Lavelle starts what turns out to be a 30-yard run just behind the halfway line before slotting the ball through to Dowie. Lavelle drives towards the center, attracting the attention of both Sky Blue center backs. With one pass, Lavelle beats the entire Sky Blue back line and finds Dowie 25 yards from goal. Dowie, with a clear line to goal, takes a few touches before rocketing a shot into the back of the net, before any of the Sky Blue defenders can close on her. While Lavelle is dribbling through the middle of the field, Dowie recognizes this and starts making her run on the outside. Lavelle’s vision to spot the run with the ball at her feet sets Dowie up nicely to send a rocket from 18 yards out past Sky Blue FC goalkeeper Kailen Sheriden, the rookie from Clemson.