The Western New York Flash will be honored for its 2016 NWSL Championship at this weekend’s North Carolina Courage match against the Orlando Pride, as first reported by The Equalizer’s Dan Lauletta.

Sahlen family will be in NC Sat. to present Courage players with #NWSL Championship rings; Joe Sahlen will be honored for work in WoSo

“We’re going to do a Western New York Flash championship ceremony before the game. We’ve got the Sahlen family coming into town. They’re going to give each player a ring. And we’re going to honor Joe [Sahlen] at halftime for his contributions to soccer and women’s soccer,” Courage President Curt Johnson said.

To conclude their final season in NWSL existence, the Flash defeated the Washington Spirit via penalty kick shootout to lift the trophy as the NWSL Champions. Just three months later, the team had been sold and was relocated to North Carolina, where it became the league’s newest franchise, the North Carolina Courage.

The Courage has started its 2017 season the same way it ended its 2016 season, with consecutive wins. It is the only team this season, and only the fifth team in league history, to open a season with back-to-back victories. 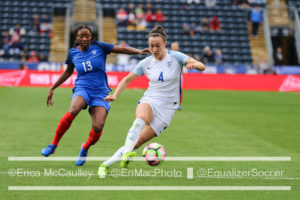 Lucy Bronze won the PFA women’s player of the year award for the second time in her career. (photo copyright EriMac Photo for The Equalizer)

Lucy Bronze and Kelly Smith were among the players honored at the 2017 Professional Footballers’ Association Awards yesterday.

Bronze, defender for the England women’s national team and Manchester City, won the women’s Player of the Year award for the second time in her career, having previously won in 2014. She beat out Man City teammates Jill Scott and Jane Ross, as well as Karen Carney, Caroline Weir and Ellen White for the award.

“Just to be nominated is a huge honour,” Bronze said in an interview with the PFA after winning. “It’s the best award to be nominated for really – for the players that you play against week in week out to think of you as the best player of the season – so to be nominated and put in the team was unbelievable.”

Kelly Smith, who announced her retirement from professional soccer in January, was also honored with the PFA Lifetime Achievement Award at the event.

Smith’s professional career spanned two decades during which she became England’s official all-time record goalscorer, recording 46 goals in 117 appearances. She played in two World Cups, four European Championships and the 2012 Summer Olympics, and she was a top-five contender for the FIFA Women’s World Player of the Year every year for four consecutive years (2006-2009).

Her last goal for club or country happened on February 20, when she converted a penalty kick in her Farewell Match between Arsenal and an all-star team formed for the event. Smith, who announced her pregnancy shortly before her retirement game, currently coaches for Arsenal, where she is in charge of the U-20 team.

The legend that is Kelly Smith talks about her PFA Lifetime Achievement award #PFAawards pic.twitter.com/IVgDziDq9h 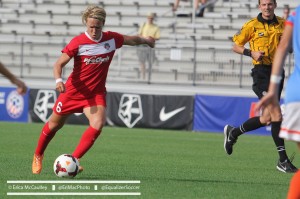 The Washington Spirit announced today that it had added former United States women’s national team and Washington Spirit midfielder Lori Lindsey to its Development Academy coaching staff. Lindsey will be the DA’s strength and conditioning director as well as serving as an assistant coach.

Lindsey appeared in 43 matches for the Spirit over two NWSL seasons before retiring from professional soccer at the conclusion of 2014. She had previously played for the San Diego Spirit and Washington Freedom of the WUSA and for the Freedom again from 2006-2009 in the W-League and WPS. She later played for the Philadelphia Independence. Lindsey also earned 31 caps over seven years with the USWNT and was part of the team’s 2011 Women’s World Cup roster.

The Boston Breakers announced today that it had partnered with South New Hampshire University as its official higher education partner. The partnership with SNHU, a private non-profit university, will help provide educational opportunities to players, staff, current SNHU students and the Boston community.

Most notably this means Breakers players will be able to pursue advanced degrees from the university while playing professional soccer, while current SNHU students will have access to internship opportunities with the Breakers. The two entities will also be hosting a events to promote the learning of STEM concepts through soccer to young women in the area.

“We are so proud to be working with the Boston Breakers, a team of strong and successful women, to give back to the greater Boston community and to show young girls, that they too, can achieve their dreams through education,” said SNHU Vice-President for External Affairs Libby May.