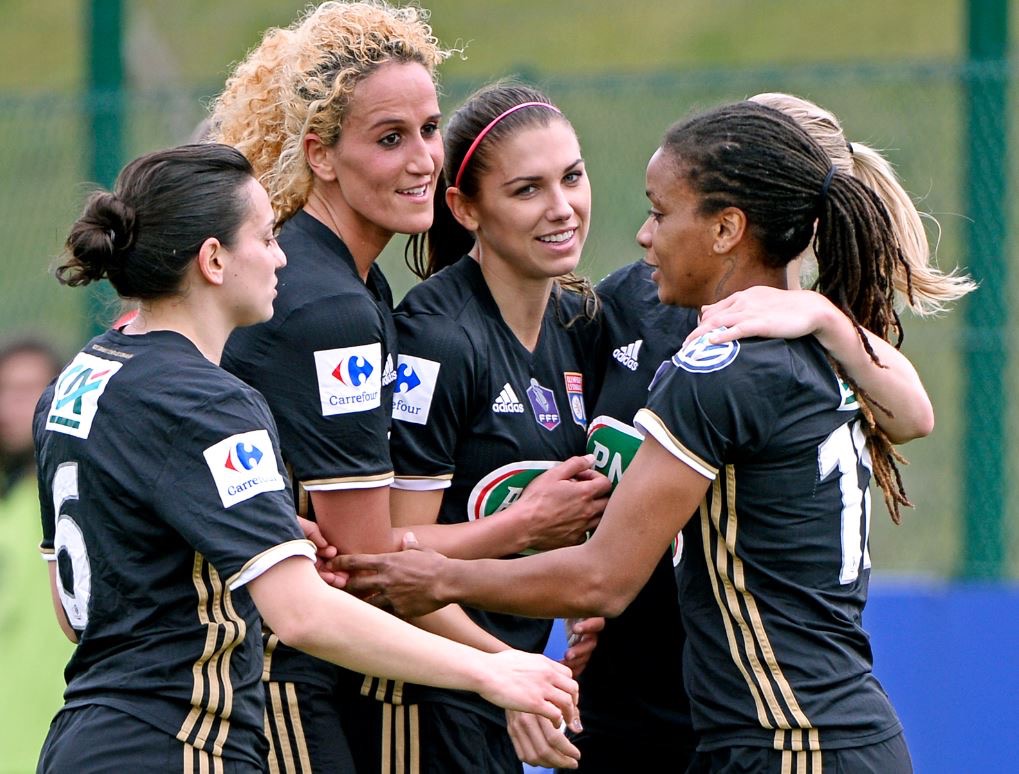 Alex Morgan and OL have a strong lead going into the second league of UWCL semifinals. (photo courtesy Olympique Lyonnais)

Manchester City’s day started off in one of the worst ways, and they never really managed to overcome it as Olympique Lyon looked dominant in their 3-1 win in the first leg of the UEFA Women’s Champions League semifinal.

In the first minute of play, midfielder Carli Lloyd was called for a handball in the box, and Saki Kumagi calmly sent it past goalkeeper Karen Bardsley to put her side up before most in the crowd had opened their snacks. Kumagi also scored the final penalty kick against Wolfsburg last year to give Lyon their third Champions League title.

Less than ten minutes later, City responded with a counterattack started by Lloyd. She passed it to Toni Duggan, who sent a superb through ball to Kosovare Asllani. The forward timed her run perfectly and beat Sarah Bouhaddi to tie up the game.

However, Lyon took the equalizer in stride. In the 15th minute, Alex Morgan found space on the left flank to send it inside to midfielder Camile Abily, who cut it back for an open Dzsenifer Maroszán. The German midfielder wasted no time firing it home, and Lyon was back on top.

Lyon maintained possession for most of the first half, forcing City into their defensive half. They picked up where they left off after halftime, putting Morgan in on goal after only five minutes of play and forcing Bardsley to come out and deny the American striker with a strong save.

Morgan made way for Eugenie Le Sommer a few minutes later, and Le Sommer wasted little time making an impact. In the 67th minute, she got the ball on the right side and collected her own bounce before firing a point-blank rocket at near post, somehow making it past Bardsley.

City pushed hard in the dying minutes to close the deficit and had a few chances, once catching Bouhaddi well off her line and sending the goalkeeper scrambling before Kadeisha Buchanan cleared the danger. With just a few minutes to go, Bouhaddi got a hand on a ball sent in by Abbie McManus off a corner kick, doing just enough to push it into the post.

Manchester City travels to Lyon next week for the second leg, facing an uphill battle in order to make it to the Champions League final. The game will be available for viewing in the US on ESPN3.
***
In Saturday’s other semifinal, Paris Saint-Germain defeated Barcelona 3-1 away to take command of the tie heading back to France. Lyon and PSG are already slated to knock heads in the French Cup final. Barcelona are the first Spanish side to reach the semifinals of the UWCL.