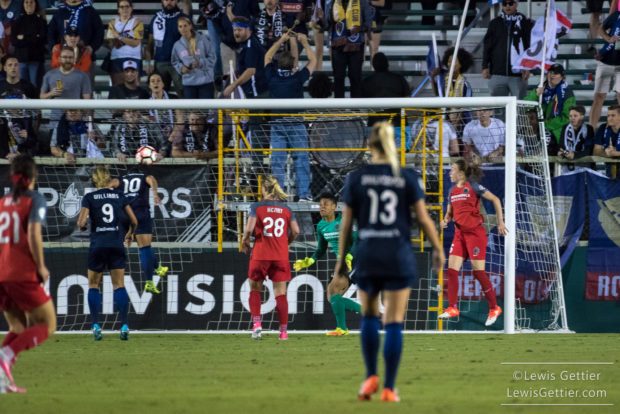 The Courage (2-0) currently sit atop the NWSL rankings with six points—Houston (1-0) played at Seattle in the night game. Portland dropped to 1-1.

In a contest featuring a plethora of capable scorers, both defenses were made to work extremely hard Saturday. But it was North Carolina, keeping high pressure, that controlled possession and was more aggressive on offense.

Despite playing with only three in the back, the Courage defense, led by New Zealand’s Abby Erceg, kept Portland’s always dangerous Christine Sinclair fairly quiet—she did seem to be moving gingerly after a hard tackle by Yuri Kawamura in the first half that resulted in a yellow card.

Though the Thorns almost struck first—in the 10th minute—when Allie Long slipped through the defense and nearly snuck a shot from the goal line inside the far post, North Carolina outshot Portland, 12-3, Saturday with nearly 50 percent of those attempts on frame.

McCall Zerboni took North Carolina’s first real shot, firing one from distance in the 16th minute but missing just wide. Three minutes later, speedy forward Jessica McDonald, last year’s league MVP, got her head on a cross from Makenzy Doniak but couldn’t find the net. In the 30th minute, Debinha dazzled the home crowd with a bicycle kick that didn’t miss sneaking inside the left post by much.

Portland had another major opportunity in the 32nd minute, when the Courage misplayed a ball in the back but goalkeeper Sabrina D’Angelo was quick to come off her line and clean it up. Lynn Williams had a good look just before halftime, getting her left foot on Zerboni’s great flick over Portland’s backline but skimmed it past the post.

In the 55th minute Sam Mewis launched a shot from distance that Portland goalkeeper Adrianna Franch deflected toward Williams, but she was called offside. Shortly after, Williams created a one-on-one situation with Franch but knocked the ball just wide.

Williams drew a penalty kick in the 73rd minute when a cross attempt hit the hand of Portland defender Emily Sonnett, but Franch came up with a huge save on Mewis’ attempt.

Debinha, who had certain made her presence in the offensive third be known all evening, converted the historical game winner in the 81st minute, heading a cleverly set up cross by Williams, far post.

The Courage next host the Orlando Pride April 29 at 4 p.m. while Portland will look to rebound against the Chicago Red Stars.