Mallory Pugh is going pro. Will she wind up in NWSL or overseas? (photo by Allison Lee)

A day after it became public that Mallory Pugh was leaving UCLA to pursue a professional career, Grant Wahl, who reported the initial story, was at it again with word that the Thorns had proposed a “significant” trade to acquire the top spot in the distribution order, but that to this point the Spirit have not been receptive.

The distribution order was instituted the morning of the 2016 NWSL Draft as a mechanism for newly subsidized players entering the league to land on teams. The order is reversed from the previous season’s final order of finish. The Spirit moved from 9th to 2nd in a trade with Orlando (trades can only be made as exchanges) in exchange for Ali Krieger. They later swapped with the Breakers as part of the deal in which they acquired Kristie Mewis and Kassey Kallman.

The Thorns have already traded to the top of the order once, shipping the No. 3 overall pick to the Breakers in 2016 for that spot. At the time they thought Pugh was ready to forego college and sign with U.S. Soccer, but she changed her mind and elected to enroll at UCLA.

Wahl’s initial report indicated that Pugh is not interested in playing for the Spirit and that signing with Lyon or Paris Saint-Germain were also options. U.S. Soccer president Sunil Gulati could try and help broker a deal between the Spirit and Thorns at the league’s owners meetings this Friday.

Lifetime’s Game of the Week broadcast of the Portland Thorns hosting the Orlando Pride drew 82 thousand viewers, according to Paul Kennedy of Soccer America. The pregame show drew 131,000 viewers according to Sports TV Ratings.

Looking at the numbers, a third-place finish for most viewers may disappoint some fans, but the numbers are slightly misleading. 2017 is the only year the season opener was nationally televised, whereas all other years didn’t see the NWSL on television screens around the country until mid- to late-season.

The first televised match in 2013 was a July 14 meeting between the Seattle Reign and Washington Spirit, while the first in 2014 was a July 20 meeting between Portland Thorns and the Boston Breakers. 2015’s first televised match was Seattle Reign at Portland Thorns on July 22, not even two weeks after the USWNT won the World Cup and during the league’s post-World Cup surge in popularity. That particular match was also the first sellout in Thorns history and featured some of the USWNT’s biggest stars in Alex Morgan, Tobin Heath and Megan Rapinoe. The first match to be televised in 2016 wasn’t until September 7 when the Red Stars hosted FC Kansas City.

Hopefully Lifetime will continue to be able to draw in viewers for NWSL. FS1 averaged 97,ooo fans in 2015 and 67,000 in 2016 during the regular season. The channel aired three regular season matches each of those seasons. 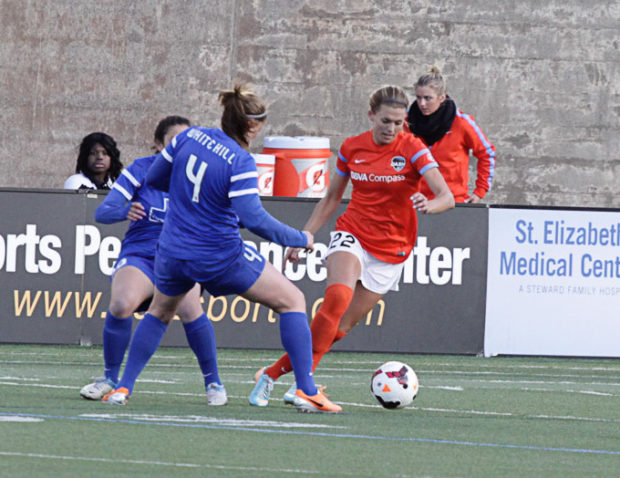 Stephanie Ochs, in orange, has been waived by the Dash, who also acquired Cami Levin from the Pride. (Photo Copyright Clark Linehan for The Equalizer)

The Houston Dash waived Stephanie Ochs on Tuesday, and within the hour announced the addition of Cami Levin via trade with the Orlando Pride. The Pride acquired a 3rd round pick in next year’s draft.

The addition of a draft pick get the Pride back into the 2018 draft after having traded all four of their picks. Ironically the Pride’s 3rd round pick belongs to the Dash.

{READ ALSO: Rodriguez out for season with ACL tear | The Kronick Report }

Ochs and Levin are both products of expansion drafts. The Dash took Ochs after she spent 2013 with the Spirit. Randy Waldrum successfully converted Ochs to an outside back in 2014, but a torn ACL early in 2015 cost her the rest of the season and she was not more than a bit player last season.

Levin was a Pride expansion draft pick from Sky Blue and was used for defensive depth in 2016 when the Pride backline departed in its entirety to play for their respective countries at the Olympics. 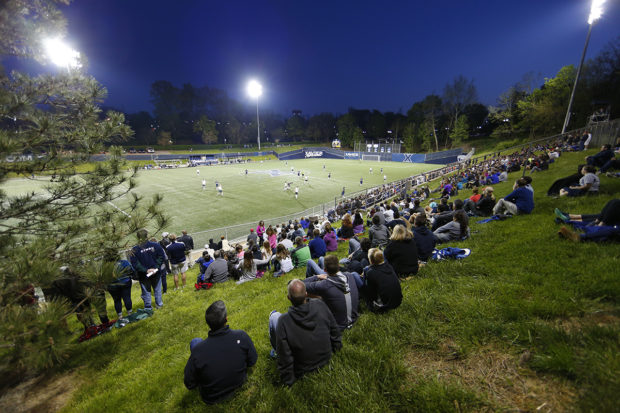 Kacey White is leaving Xavier to take a coaching job with U.S. Soccer. The school, where White accepted the head coaching position in December, made the announcement. She will leave Xavier without coaching a regular season match.

White, 32, is capped by the United States and was part of Sky Blue FC’s 2009 WPS championship side. In 2010 White served as acting captain early in the season while Christie Pearce (then Rampone) was out on maternity leave.

On Saturday, Barcelona will become the first Spanish club to play in the UEFA Women’s Champions League semifinal. It may happen in front of a sellout crowd.

Barca will host Paris Saint-Germain on the first leg of their semifinal. The return leg is April 29 in Paris. The other semifinal has Manchester City hosting Lyon in the opening leg. In that tie, U.S. stalwarts Carli Lloyd (Man City) and Alex Morgan (Lyon) will be on opposing sides.

NWSL is teaming up with Major League Soccer and U.S. Soccer this weekend to host “Head Injury in Soccer; From Science to the Field.” The medical summit will take place Friday and Saturday in New York City.

The summit will open with a a presentation of soon-to-be-released key findings and conclusions from the 2016 Berlin Consensus meeting on Concussion in Sport.

Throughout the conference, specialists will discuss state of the art principles, concepts, mechanisms and innovative treatments for head injuries and concussions specific to the game of soccer for all ages, levels of participation, and genders for the sport.

Head injuries are a hot-button issue of modern sport. Brandi Chastain has agreed to donate her brain to be studied so doctors can learn more about the affects of a lifetime spent heading soccer balls on the human brain.

Amy Rodriguez out for season with torn ACL
Run of Play: Keepers Are Doing It for Themselves