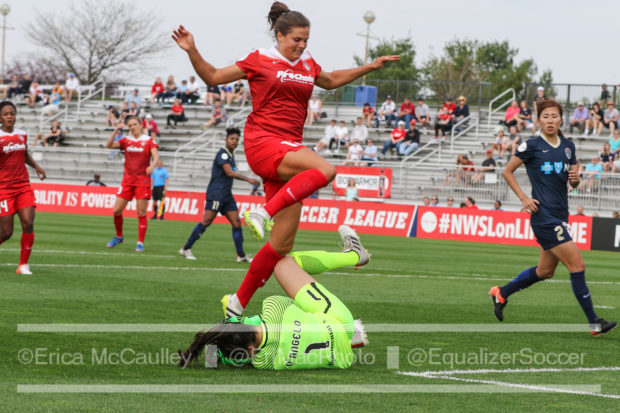 For months, no conversation about domestic women’s soccer tactics could get off the ground without referencing the 3-5-2. Ever since U.S. coach Jill Ellis decreed it the new world order of the national team last fall, the alignment and Ellis’s personnel choices have been trending everywhere. As NWSL preseason began, folks wondered aloud whether coaches would follow suit and install the same for their clubs.

Some said they might try it. Others, like Tom Sermanni, used it in preseason. So did Jim Gabarra, whose 3-5-2 surprised and stymied the Flash for most of the 2016 NWSL Championship. One coach, during a preseason chat discussing how difficult it is to pull off, responded to a direct question about using it by saying: “You never know.”

And then came Week 1, and all four teams rolled out traditional four-back alignments. Even Gabarra, again playing the Flash who are now the Courage, played with four in back.

I spoke with two NWSL coaches on Monday, one of whom said his team is not built for the 3-5-2 and another who said it will likely happen at some point this season.

“You can’t play it because it’s the new fad,” Dash coach Randy Waldrum said. “I’m still a believer that you play what you have—the strength of your personnel. If you have the personnel to play only three, you have to have two wide players (wingbacks) that can cover a lot of ground. I don’t think you’ll see us playing that way unless you see us playing a game and needing a goal. Right now I’m not sure that we’re built for that.”

Rory Dames said he and his staff discussed a 3-5-2 during exit interviews after last season and said the Red Stars are likely to use the formation at some point in 2017. He has previously only gone to three in back in an effort to recover a deficit in a game.

“Attack wise it was great because we obviously created chances,” Dames said. “We figured that we should train it a little bit and work on it a little bit so when we do go to it, we’ll at least expose them to some of the defending and have a little bit better understanding.”

Dames said there are teams in the league against whom he is likely to play a 3-5-2. “You’ve got to have some serious athletes that can cover ground if you’re going to run that system and be successful with it, that can cover ground. We feel like we have the players that have the attributes to do that.”
***
Saturday, in the first game of the season, Dames lined up his Red Stars in his traditional 4-4-2 with Christen Press playing underneath Stephanie McCaffrey and Jen Hoy. But for the second season in a row, the Red Stars returned home from a Week 1 trip to Houston empty handed in terms of points. Things were looking up for Dames’s side until McCaffrey smacked one off the post, and in the fallout, Amber Brooks went over the top to find Kealia Ohai who scored to put the Dash on top, 1-0. Both coaches agreed the match turned in that moment.

“How we thought it would play out, it played out. We just made a big mistake and put ourselves down,” Dames said. “If Stephanie’s ball is three more inches to the inside of the post it’s probably a different game. But that’s the beauty of the game.”

“It was that kind of game last year that we would have lost or tied,” Waldrum said. “We would have given up something late or not been able to finish it out. The second piece was that we got the second goal to put it away. We lacked that at times last year.”

The second goal was a Rachel Daly masterpiece—“Now we know how those other people feel,” Dames said, a nod to Daly’s goal being out of the Press playbook—but in the leadup to it, the Dash were in the process of killing the game against a worn out Red Stars bunch.

“When we hit the 70 minute mark, we were done. We haven’t dealt with anything like that. It was like 85 (degrees) there, and it hadn’t been higher than 50 in Chicago,” Dames said. “Not making excuses, but it wasn’t the right day to have to go down there and chase the game the way we had to.”

There will be warmer days in Houston this summer, though Dames said it was the change more than the actual temperature that ran his team into the ground for the final 20 minutes on Saturday (the Dash chose an afternoon start over an Easter Sunday opener; the Dynamo had their stadium on Saturday evening.) “For the five minutes before their second goal, we just couldn’t get the ball.”

“About 60 to 65 minutes in, you could see it really change,” Waldrum, who conceded the Red Stars were the better team in the first half, said. “What I’ve really felt like over the years, I don’t think we’ve ever been able to capitalize on the heat. I think we have to understand that teams are going to come into Houston in June and July and it’s going to be very difficult to play. That’s where we have to learn to put the pedal down a little bit and take advantage of the home conditions. We’re not in the heat of day every day, but we are training in it so we need to be able to take better advantage.”

As the result a year ago proved, opening day does not a season make. After beating the Red Stars last year, the Dash won only once more before July 22. The Red Stars did not concede another goal until May 22 and did not lose again until June 22.

“Last year when we left, it was like a training game. We were off the pace; we were off the game. This year I thought for 60 of the 90 minutes we were the better team,” Dames said, adding that he expects it to take about four games for the Red Stars to be fully up to speed.

Waldrum shrugged off any comparison to last season, saying only, “We still have a lot of work ahead.”

-My Player of the Week ballot: 1) Amy Rodriguez – the best and most explosive player on the pitch before going down with a knee injury around the hour mark; 2) Haley Kopmeyer – superb effort in goal to snatch a point for the Reign—and darn near got to Sarah Killion’s PK; 3) Debinha – as advertised in a creative role for the Courage demonstrating an ability to fight through tackles and create chances for herself and others. I know, I know, Steph Labbe. She was great, too, and her save on Jess McDonald’s header was straight off the top shelf.

This is what us moms do. ❤️

-Watching FC Kansas City on Sunday offered the full gamut of sporting emotions that drives us to watch. The joy that Rodriguez and Sydney Leroux exuded to be back on a competitive soccer pitch was palpable even before they each got on the scoreboard. Rodriguez’s agony after going down was equally as raw. And it didn’t seem so much like she was in pain—though she surely was—but like she instantly knew it would be a long time before she would be able to play soccer like that again. (as of early Tuesday, no official news about the extent of Rodriguez’s injury.)

-Tough news about Joanna Lohman tearing her ACL on the sequence in which the Spirit conceded on Saturday. That’s a tough blow for for the club on and off the field and of course for Lohman. You may remember my long-form story with her from earlier this year.

-It was nice to see Meg Morris back on a live match after her 2016 season was cut short due to a broken hip. Morris lives in New Jersey where she did her rehab and was able to be with the Thorns when the beat Sky Blue at Yurcak Field last September to claim the Shield. She was on crutches that night.

-Somehow the Breakers managed to start Midge Purce at right back on Sunday. Purce, a 1st Round pick, led the Ivy League in points last fall. The Breakers were without Amanda Frisbie (quad strain) and Julie King was on the bench after missing much of preseason injured. Still I can’t help but think there could have been a better plan—both for the right back spot and for Purce.

-I enjoyed Kailen Sheridan’s confidence in the box for Sky Blue FC. Despite speculation he may use the last pick of the 1st round on Jane Campbell, Sky Blue coach Christy Holly had his eyes on Sheridan all the way. Clearly Canada coach John Herdman agrees, having made her a Federation Player this year.

-Most of my thoughts on the go90 app and rollout can be found here and don’t have to be constantly rehashed. But in short, it needs to be easy for fans to see the games. I appreciate anyone who is more tech-savvy than me and those who are so dedicated to NWSL they will go to any length to watch the matches. But NWSL water cooler talk should never be about comparing methods to juke the streaming app.

-Rory Dames on replacing Arin Gilliland at halftime: “This is the most competitive it’s ever been to get on the field in the five years. So people can’t have poor outings without expecting someone else to get a run out.”

-Lauren Barnes and Christine Nairn entered the season in the lead in the #RaceTo100 with 85 regular season appearances each. Both started for the Reign on Saturday and are now 14 short of becoming the first players to play 100 regular season matches. For Nairn it was her 60th straight appearance, extending the league’s longest current streak. Brittany Taylor, who started for FC Kansas City on Sunday, played her 84th league match.

-Kassey Kallman tied a league record on Saturday when she extended her consecutive minutes streak to 3,690. Kallman now shares the record with Brittany Taylor and will break it if she starts this weekend for the Spirit.

-Adrianna Franch is now unbeaten in her last 14 regular season decisions, establishing an NWSL record she had shared with Hope Solo. We won’t blame you for still considering Solo the record holder though. Franch’s streak began July 14, 2013 when she played for the Flash. In the interim, Franch has missed a season for an ACL tear, played a season in Norway and was the losing keeper in the 2013 NWSL Championship.

-You may have noticed that the Sky Blue captain this year is Christie Pearce. If you’re new to the game and don’t know, that was Christie Rampone’s maiden name. It’s a shame no one told the league—or the broadcast team working the Sky Blue game Saturday night. That’s a bad look. But Captain America will be going by Christie Pearce again this season.

-Dames on how play will be impacted by an influx of day games forced upon teams due to the Lifetime window: “I think the more you’re playing in it, the more acclimated you’ll get in it. What will probably happen is the games will slow down a little bit because you have to be able to slow down tempo and dictate pace to be able to go for 90. Hopefully that will make the quality of the games better because it will require a little more tactical awareness and technical ability and a little bit less just running.

-Elizabeth Eddy has a hamstring injury. The Courage expect to know more on Tuesday.

-The Thorns finally got their Shield on Saturday.

Mallory Pugh leaving UCLA for pro career
The Kronick Report: Daly curves one into the mainstream