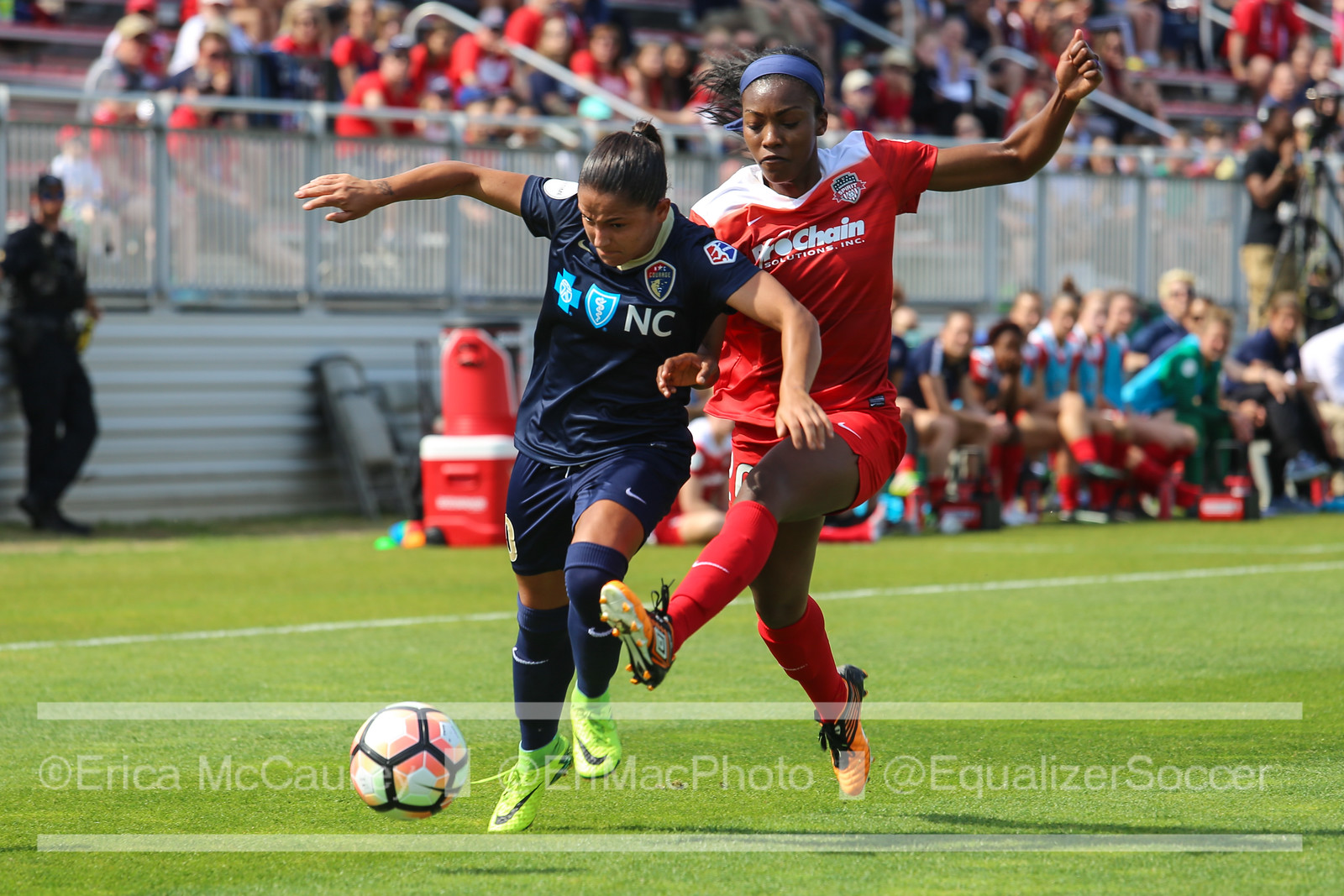 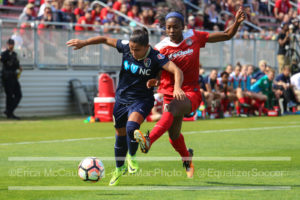 Debinha and Cheyna Williams compete in the Courage’s 1-0 win over the Spirit. (photo copyright EriMac Photo for The Equalizer)

There’s no doubt that when it comes to internationals in the NWSL, it’s been hit or miss. While it’s certainly too early to tell  if she’ll be a hit, North Carolina fans should be excited by Debinha’s first outing in the NWSL. The creative player cut in between Spirit players almost at will and generated several dangerous opportunities in the second half. If she had shot an opportunity she created by getting in between two Spirit defenders, she might have scored in her debut.

Debinha is a stark departure from the type of player the team formerly known as the Flash are custom to employing. This team’s trademarks are its brute force and athleticism. The Brazilian showed yesterday that she could be the piece that helps the now North Carolina Courage add another layer, especially with Sam Mewis sitting right behind her.

The Courage already have one of the deadliest one-two punches in the NWSL in Lynn Williams and Jessica McDonald, who combined for 21 regular-season goals last year. If Debinah is able to consistently add some flare to the middle of the park?

“It makes it tough on the opponent because they never know what we are going to do,” McCall Zerboni, who scored the game’s only goal, said about her new teammate. “We can play through the middle, go out wide, and she just kind of adds that caliber to us where we’re really dynamic.”

Labbe: Star of the Game

It’s never a good sign when a keeper notches several more full-extension saves than the rest of the team manages shots on goal at the other end. Alas, Stephanie Labbe’s outstanding performance in goal for the Spirit was the bright spot in an otherwise forgettable performance for the home side in yesterday’s season opener.

After the game, Labbe was jokingly asked if she liked working this hard. “Every once in awhile,” she replied with a bit of laugh. Whether the Spirit’s defense will be subject to the kind shelling it took yesterday on a weekly basis remains to be seen, especially since they faced the most prolific offense of a season ago. Nonetheless, Labbe will need to consistently perform well to keep Washington in games as this offense isn’t going to generate many multi-goal performances.

It’s an intriguing situation for the Spirit as head coach Jim Gabarra marooned Labbe on the bench upon her return from the Olympics in favor of Kelsey Wys. Can a player spurned become the savior?

The Past Comes A Knockin’

“We’ve had four weeks together and that’s plenty of time to get things sorted out,” Spirit midfielder Tori Huster said postgame when asked if the transition in personnel played into the team’s performance. “I’m really done talking about last year. I think we’re trying to be positive and forward, and next week will hopefully be better.”

It’s clear that Washington is sick of discussing last season. It’s understandable, but the reality is the narrative surrounding the team will continue to be the long list of departures and missteps by the front office until/unless the players change themselves on the field. It’s a hard task to be sure, especially when the team can’t seem to shake losing starters to injuries early in games. In some ways the last several games played by the Spirit make the team appear to be stuck in some kind of nightmare Groundhog Day scenario.

Gabarra was blunt about his team’s performance. “We need to be able to move the ball around quickly and efficiently. There was no efficiency whatsoever.”

If you want to move forward, however, it’s probably good that neither the team nor its coach allowed the injuries or the off-season transition to be excuses for the performance yesterday. The players and staff know no matter who’s on the field, the passing and movement has to be better.

It wasn’t just for the home team that the past was present. While the Courage celebrated its first goal in franchise history, members of the WNY Flashers supporters group sat in the stands. The “newness” of the Courage is debatable, but the sting of how abrupt the WNY Flash departure was to fans was not.

Members of the Courage thanked them for the support, and fans offered up some mementos. It was probably the closest thing to closure about the abrupt sale and uprooting either group will get. It’s definitely a hard balance to strike, respecting the past while building a new future.

Cary, NC is a much better market for women’s soccer and better for the league as a whole. No matter how hard the Courage try to hit the reset button, however, the Flash will always be a part of its history.