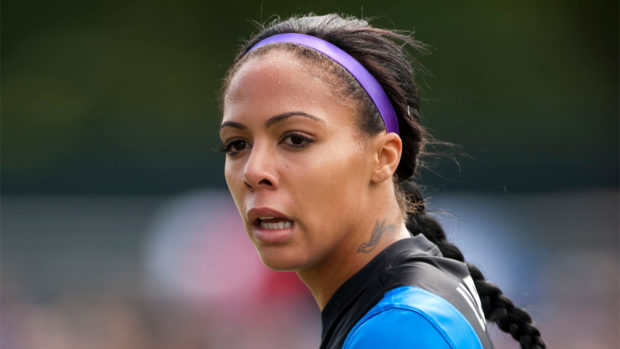 Two days before she suited up for her FC Kansas City debut, Sydney Leroux took to Instagram.

Beneath a photo of herself in the FCKC kit, holding a team banner overhead, Leroux wrote, “It will be 656 days since I’ve played in a soccer game. That’s 656 days of wondering, can I? Will I? What if? That is a HELL of a lot of wondering.”

It will be 656 days since I've played in a soccer game. That's 656 days of wondering, can I? Will I? What if? That is a HELL of a lot of wondering. The days were long and hard and brutal and beautiful all at once. To say I'm excited to get back on the field is an understatement. I am so thankful for the people who have stayed in my corner and made me believe that I can and I will. I hope to see some of you on Sunday! – Syd The Kid (who is no longer a kid anymore and is getting old af)

The weight of all that wondering finally lifted Sunday. Positioning herself beneath a long ball from Becky Sauerbrunn in the 7th minute of an eventual 2-0 win over Boston, Leroux waited out a couple of bounces from Sauerbrunn’s pass, and knocked in her first goal since May of 2015. The celebration took perhaps even more energy, as she leapt in the air, stomping gleefully into the grass as hard as she could with both feet over and over again.

“I feel like I was almost in tears and I was screaming … I forgot what it felt like to play and to play free and to play happy and I got to do that today,” she said. “Even though I was a little tired towards the end, I have to continue to push myself and get back to where I once was. That’s the plan from here on out.”

It was a perfect start for FCKC, a season after it missed the NWSL playoffs for the first time in franchise history. Leroux made her long-awaited comeback, and – at least for a while – so did Amy Rodriguez. The second piece of FCKC’s duo of national team forwards found herself on the scoring end of a back-and-forth with Shea Groom in the 48th minute.

For an hour on Sunday, life was perfect for FCKC. The question of how two national team-caliber players would return to elite form after maternity leave had been answered, at least as much as these questions can be answered in the first game of a season.

But now it’s a different kind of question plaguing the Blues after Rodriguez went down with a frightening left knee injury early in the second half.

Rodriguez didn’t move her left leg for several minutes as she lay on the ground, and medical personnel eventually had to stretcher her off. Once on the sideline, Rodriguez was fitted with a full-leg brace on her left leg. She was taken for evaluation Sunday, but the extent of her injury won’t be known until she receives a full medical examination Monday.

“We’re just hoping it’s not as bad as our first impression,” head coach VlatkoAndonovski said. “She was actually apologetic, like, ‘oh, I’m sorry I had to leave the game.’ That’s who these players are. They’re warriors.”

Other things we learned…

Christina Gibbons is good at this whole soccer thing

Okay, so we mostly already knew this, but Gibbons proved it on a professional field for the first time. The rookie defender suited up alongside veterans Becky Sauerbrunn, Yael Averbuch and Brittany Taylor on the FCKC back line. And despite the amount of expectation on her shoulders (Andonovski has said, among other things, that she has the talent to start on the national team, and he has compared her to Sauerbrunn herself), Gibbons performed. She found space when she needed to, kept possession despite pressure from Boston, and maintained her poise despite pregame nerves.

“It’s a little bit of a blur,” Gibbons said of her debut. “I’m thinking the moment that stands out was Syd scoring, and I think that’s the first time I actually started breathing.”

“Everything I saw until today and in the preseason and everything I expected pretty much happened,” Andonovski said. “She was playing very, very confident, very mature, made very good decisions throughout the whole game, and she was actually our way out of pressure. She helped us solve problems, helped us circulate the ball around the back.”

Shea Groom can thrive in a supportive role, too

The third-year player was a bit of a solo weapon last year, but she proved Sunday she can provide support when needed, too. Rodriguez’s goal in the second half was spurred by Rodriguez’s breakaway speed, yes. But the chance was maintained by Groom speeding down the opposite flank, and crossing the ball back into Rodriguez.

Instead of running pell-mell around the field, creating by herself, Groom was just one piece of a more well-oiled machine Sunday. How that will continue will definitely depend on Rodriguez’s injury. But for just over one half of soccer, FCKC’s 4-3-3 formation worked.

By the end of last season, Barnhart was a little beat up, but you certainly can’t tell anymore. During one particular sequence in the second half, the Breakers played a little pinball with the FCKC keeper, and Barnhart proved once again that she can stop those chances, even when it seems certain the other team is about to score. After she knocked back two point-blank shots in a row from Boston during that sequence, Andonovski actually turned to his assistant coaches on the bench and just shook his head, nearly in disbelief.