Point by Point: Dan, Hannah on lead up to opening day

Week 1 is here. How did the NWSL handle its offseason?. (photo courtesy Meg Linehan, Excelle Sports)

The fifth NWSL season is here. All 10 teams are in action Week 1, starting with the Dash hosting the Red Stars at 2 p.m. EDT on Saturday. The new season is complete with a new media deal, a national Game of the Week on Lifetime, and a recently announced deal to stream the rest of the games on the Verizon go90 app.  Things are looking up.

Dan Lauletta and Hannah Kronick are here to discuss the run-up to the 2017 NWSL season.

The league finally announced its streaming partner. All non-Lifetime games will be streamed on the go90 app. Is this a good move?

Dan:  I want to say yes, and I owe it more time both for research and just to see how it works, but I have to say on the surface the answer for me is no. Free, non-revenue-generating YouTube streams were never going to be forever, but the go90 deal cuts out anyone trying to watch on a PC or laptop. My friend Allison Lee lays this out pretty well here.  I know there are ways to cast it onto a television and workarounds to watch on nwslsoccer.com, but that seems too complicated if you’re trying to bring in new fans. Also the timing of the announcement did not exactly leave people much time to get squared away in time for the opener?

{LEE: Why NWSL missed the mark with the go90 deal}

Hannah:  I agree with Dan. I was (still am not) the biggest fan of last year’s YouTube streams due to quality, but one thing that those did offer was accessibility (on any device). I think alienating people who watch on a desktop/laptop is a big miss. In the cord-cutting world that we all live in today, many people do have connected devices where using the go90 app would work and yes, lots of streaming today comes from mobile devices, but there are still people who use laptops to stream content to their TVs. There’s also lots of confusion about how the streaming is going to work, which Dan points out above. Awareness and ease of access are two key components to success here, and I think right now, that looks to have failed—the announcement was too late and too vague.

What about the Lifetime package? The schedule has a match every Saturday the league plays, and the production quality is expected to be top notch.

Hannah: I don’t think I can ever argue that the Lifetime package was not a good move. I’ve said it before that I question the overlap between the Lifetime audience and the NWSL fan (and prospective fan)—but, Lifetime gives the NWSL a home on national TV week in and week out. And that’s huge. It’s great for the league right now and it’s great for the sport moving forward. It offers consistency, professionalism, and should drastically increase overall awareness.

Dan:  Issues with the audience aside, which Hannah covered and for which I already have some anecdotal evidence of, this is going to be great. From everything I’ve heard the production level is going to be through the roof, and the league delivered on making this an actual Game of the Week—no exceptions. I’m not crazy about the games that were picked, but at this point that’s a minor element to a major project. I’m also a big fan of both Jenn Hildreth and Aly Wagner. They should bring professionalism and a good, hard soccer analysis to the production.

What are your thoughts on the timing of the announcements? Will the lag have any long-term impact on NWSL or will it be all better and forgotten about by May?

Dan: There is no way to get around it. The last 10 weeks have been a PR disaster for NWSL. Let’s keep in mind this is a major tech project and these things often get delayed. While not ideal, I can see why it took everyone until the 11th hour to get everything firmly in place. But why did everyone stay so quiet in the meantime? Why weren’t NWSL and A+E higher-ups giving interviews—offering interviews—to clue fans in on what was in store? A little bit of good news here could have gone a long way. Instead, the silence led many to anticipate the worst and eventually the timing became so tight it was ridiculous. Even when NWSL announced its Opta partnership, much of the reaction was, “That’s great but can we see the games?” There is a good chance this will be long forgotten by mid-season, but I do think NWSL cost itself some goodwill and maybe even a few fans for acting like they were too important to sell their own product in the time since they announced the deal with A+E.

Hannah: I agree completely with what Dan said. One thing to add is that, with the lack of announcement and information over the last 10 weeks, I think the excitement for the start of the season was overshadowed. People were worried that there wouldn’t be a way to watch games outside of the Game of the Week, and that worry and concern greatly eclipsed anticipation and excitement for season kickoff. The NWSL should have made this announcement sooner–or at the very least, been forthcoming to clue fans in to when they could expect it. Doubt and concern surpassed exhilaration this week. On the other hand, although the ambiguity is apparent right now, it will subside by mid-season, if not within the next few weeks when fans get adjusted to the go90 platform and continue to stay excited about the Lifetime piece.

NWSL somewhat quietly announced an agreement with Opta to provide advanced statistics for every match (Opta also has 2016 data collected). How will this change the way NWSL is consumed?

Hannah:  I think this is great. As a top-tier professional sports league, it’s essential. Data and analytics are big drivers of content, and it gives fans another touch point for engagement. In addition to fueling fan engagement, I think this level of data will also help teams advance their analysis of game performance. Better stats and analytics will better inform tactical and technical decisions that coaches make, it will transform how players are analyzed by the media and by their respective coaching staffs, and will influence post-season awards as well. 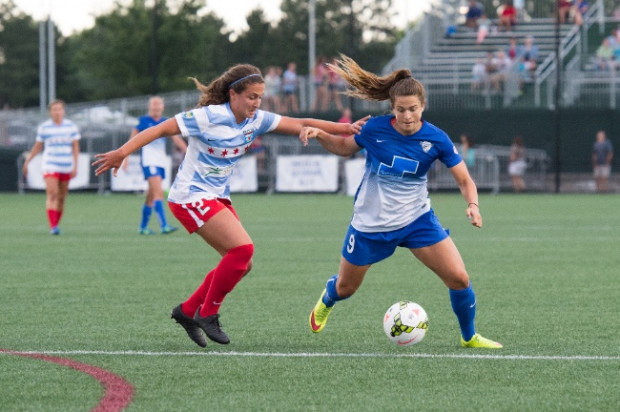 Dan:  While this is a great addition to the overall presence of NWSL, I’m going to disagree to an extent. Advanced stats are a good thing, but they can also lead to situations where people lean on them too much. All across sports it feels like we’re trending toward crunching data in a computer over watching and analyzing the games we all grew up loving. I’m okay with advanced stats within the context of the game itself which can never be defined or shaped through any hard numbers outside of wins, losses, and draws. But to repeat, it’s a great way to engage new fans and establish legitimacy for a league still in its nascent stages.

Finally, what do you expect from this NWSL season, especially at the beginning?

Dan: A lot of excitement, maybe after some grumbling as opening weekend stream issues get ironed out. For the most part, national team players will be with their teams except during FIFA windows. Marta should be here in a week to help Orlando move into a brand new stadium. North Carolina has a chance to become a cornerstone market for the league. And being on television literally every week of match play is an incredible boost. And did anyone notice that fewer players retired this off-season than in years past? I scratch my head about how NWSL sometimes goes about communicating information, but the league has absolutely broken ground on a new level if stability for women’s professional soccer.

Hannah: A continuation of momentum! I think the last few months have been instrumental in getting the NWSL to the spot that it’s at right now. On the eve of year five with a national TV deal, a reliable streaming partner, a re-worked digital league hub, a data partnership along with major signings like Marta and a new market in North Carolina–this league is at an important juncture in time, and it’s ever so important to see continued momentum throughout the season.

Week 1 Preview: The NWSL is Back
Houston Dashes to Opening Day Victory over Red Stars Again