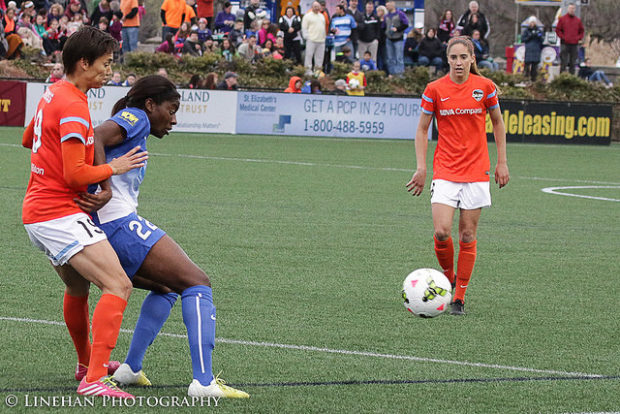 Morgan Brian’s knee, injured during the SheBelieves Cup, is not ready to allow the former No. 1 overall pick to play on opening day. (Photo Copyright Clark Linehan for The Equalizer)

Morgan Brian will not be available for the Houston Dash when they open their season Saturday against the Chicago Red Stars. As reported by Corey Roepken of the Houston Chronicle, Brian is still on the mend from an MCL injury she suffered during the SheBelieves Cup on March 7. According to Roepken, Brian trained one day with the Dash after SheBelieves and tweaked the injury. She has been doing light training on the side ever since.

The Dash are entering a pivotal season having failed to make the playoffs in their first three seasons during which they are an aggregate 17-34-13. They are already without Carli Lloyd for the first part of the season while she completes a short-term contract with Manchester City.

Brian suffered through an injury-plagued 2016 that combined with the Olympics to limit her to 13 games. She missed the camp and friendlies earlier this month.

FC Kansas City, who announced an 18-woman roster at Monday’s deadline, added three players on Friday while placing two on injured reserve. Caroline Flynn, Maegan Kelly, and Brittany Ratcliffe were all announced as new signings Friday while Alex Arlitt and Mandy Maddish were placed on the 45-day disabled list. The moves leave FCKC with one roster spot since players on the disabled list do not count toward the limit.

“I’m very happy with this roster, especially after adding these three players to the team,” FC Kansas City head coach Vlatko Andonovski said. “All three have NWSL talent and will be valuable additions to our team.”

{PREVIEWS: FCKC’s road back to the top | Best days ahead for Thorns}

Ratcliffe is the only one of the trio with NWSL experience having made 15 appearances for the Breakers as a rookie last season. Kelly was drafted by the Blues with the penultimate pick back in 2014 but has played only in Iceland and Finland since then. Flynn was the final pick in this year’s draft but did not join the side until the end of March.

As for the injuries, Laddish is continuing to recover from offseason hip surgery and Arlitt picked up a knee injury in Australia. Both will be eligible to return May 29.
***
The Thorns also made a roster addition Friday inking defender Meghan Cox. The 22-year old impressed at Thorns camp after going undrafted out if the University of Virginia.

“We are excited to give Meghan this opportunity after a very strong preseason,” said head coach Mark Parsons. “She brings a great range of passing and will provide depth along the backline.” 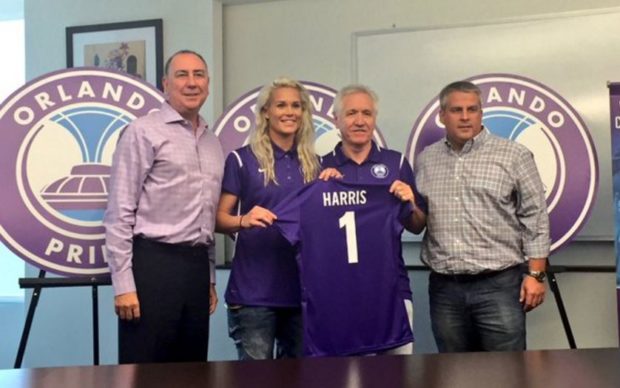 Ashlyn Harris has been named captain of the Orlando Pride. The 31-year old goalkeeper who grew up in nearby Satellite Beach was named NWSL Goalkeeper of the Year in her first season with the Pride following three with the Washington Spirit. The Spirit had a surplus of Federation players and opted to appease Harris by leaving her unprotected which allowed her to play at home.

“Ashlyn is an obvious choice, for a variety of reasons,” Pride coach Tom Sermanni told orlandocitysc.com about the decision. “Her pedigree as a player, her quality as an individual, the way she’s respected within the team, her professionalism within the game of soccer, and what she’s done in the game. And she’s got the right motives for being the captain, because it’s all about the team. So, she fills all the criteria to make a great captain and a great leader.”

Alex Morgan served as Pride captain last season but is unavailable at least until June due to a short-term contract with Lyon.

“It’s a great honor, but everyday I commit to showing up and being me. And that’s leading this team vocally, and by example, no title will change that,” Harris said. “It doesn’t change the way I get ready in the morning or the way I prepare myself to show up. Every day for me, it’s important to bring all the qualities that are needed to play my role on this team. But yes, it is an honor and growing up here and this being my home, it’s a little bit more special. But the team comes first and foremost.” 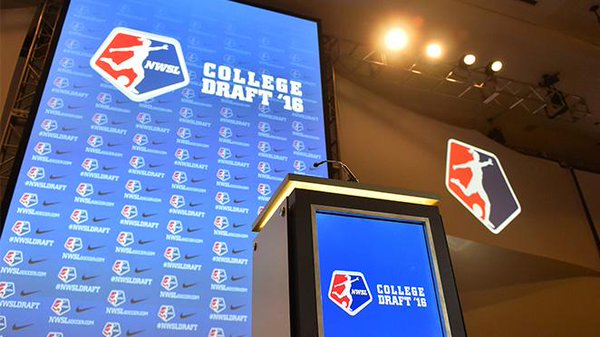 With the 2017 season upon us and teams prepared to go up or down the table, it seems like a good time to catch up on which 2018 draft picks have been traded. Teams are not permitted to move 2019 picks until after the 2017 NWSL Championship.

1st Round
-The Thorns and Red Stars—the teams picked to finish 1-2 in the NWSL Media Association standings poll—stand to get richer with two picks in next year’s 1st Round. The Thorns will pick for the Pride while the Red Stars acquired their pick from the Reign.

2nd Round
-The Red Stars traded their pick to the Breakers but still own three picks in the pivotal 2nd Round thanks for deals with the Dash, Pride, and Thorns. The Reign are also traded out of the 2nd Round through a deal with the Spirit.

3rd Round
-The Pride, Thorns, Reign, and Courage have traded out of this round with their picks going to the Dash, Red Stars, Spirit, and Dash respectively.

4th Round
-Only two picks moved so far but one of them has been traded twice already. The Pride pick went to Portland—yup, they’re out of 2018 altogether—and the Thorns flipped it to North Carolina. The Thorns’ natural pick now resides in the hands of the Courage as well.