Being a sports fan can be a very depressing hobby. Whether your team loses the championship in the final seconds of the match, your favorite player gets traded, or your local team packs up and moves to another state, sports fans are used to suffering. For some, it’s what makes sports so great: the highs wouldn’t feel as high if it weren’t for the lows. For others, we could use a break from the negativity.

Enter the Friday Favorites, a new column for The Equalizer where I try to highlight some of the more fun, lighthearted, and heart-warming aspects of soccer. After all, it’s the beautiful game for a reason, right?

So without further ado, here are today’s Friday Favorites.

(image courtesy of Playing for Pride)

On Tuesday, Washington Spirit forward Katie Stengel announced via social media that she was would be Playing for Pride for the 2017 NWSL season. Less than a week later, USWNT and North Carolina Courage midfielder Sam Mewis also joined the campaign.

Playing for Pride is a campaign created by North Carolina FC midfielder Austin da Luz as a way for professional soccer players to raise money and raise awareness for LGBT rights. Currently eight players on four teams across three different leagues are involved.

“It’s an idea I’ve been kind of kicking around over the last couple months,” da Luz said. “I’ve always been sort of a vocal proponent for LGBTQ rights, but in light of, you know, HB2 [North Carolina’s transgender bathroom bill] and sort of our current cultural and political climate, I just felt like I needed to do a little bit more.

Stengel, who attended Wake Forest where she met da Luz and was coached by his father, saw him promote the campaign online and decided to get involved.

“I saw what Austin was doing, he’s been tweeting a lot about it, so I read what he wrote on his website, CrowdRise, and thought it was a great idea,” Stengel said. “And I mean, it’s nice to be able to contribute any way I can and try to help out with a pretty interesting campaign.

“I mean, I think the whole reason [Playing for Pride] got me was that it’s all about inclusivity and how people are free to be and act how they want. It’s anyone’s personal decision how or who they choose to love.”

Stengel said that she’ll follow da Luz’s donation plan, donating $2 for every game played, $3 for every start, $4 for every assist and $5 for every goal. The hope of the campaign is for fans to also donate following the plan, come up with one of their own, or in whatever amount they choose. All money raised will be donated to the Human Rights Campaign, an LGBT civil rights advocacy organization.

The original goal was to raise $3,000 by the campaign’s end, but after the campaign raised over $1000 in the first night, da Luz decided to increase the fundraising goal. As of Friday morning, the amount raised is just over $2,000.

As of now, Stengel and Mewis are the only NWSL players involved, but da Luz is hoping more players will join the cause. “I hope to get a bunch more of those girls involved.”

Fans who want to support Stengel, Mewis and the Playing for Pride campaign can check out its webpage and donate here.

Author’s note: Since publishing this article, Joanna Lohman of the Spirit and McCall Zerboni and Jessica McDonald of the Courage have also joined Playing for Pride.

At the end of @NorthCarolinaFC match, she says, "I wish we could come to a game with girls playing." Was proud to say soon @TheNCCourage pic.twitter.com/RoGAhp4Jus

On March 25, Scott Lunn attended a North Carolina FC match with his two daughters, Amber, 5, and Ashley, 7. Although neither of the girls play soccer themselves, Lunn is a self-proclaimed soccer junkie who has taken them to as many soccer games as he can.

But on the night of the NCFC match, Amber turned to her father and said, “I wish we could come to a game with girls playing.” His response? “Soon.” Later that night, Lunn tweeted about the exchange including a picture of his youngest wrapped in a NCFC scarf.

It looks like Amber will be getting her wish much sooner than later. Just two weeks later, Lunn once again took to social media to say he and his daughters would not only be attending the North Carolina Courage’s home opener on Saturday, April 22, but that they’d be doing so as guests of the Courage and owner Steve Malik.

“I’ve always enjoyed the dialogue that we have with our fans on social media, and I got tagged somewhere in that chain and that’s when I first saw [Lunn’s tweet],” Malik told The Equalizer. “This is a real testament to the passion that our staff has, they saw a really good opportunity to embrace one of our fans and–I’ll take credit for laying down some of the principles but it’s nice that I didn’t have to send somebody a tweet and say, ‘Hey, this would be a great opportunity to embrace someone.’ They knew to do it. That’s doubly awesome.”

As a result of Malik and the Courage’s gesture, the Lunns will now be attending their first ever NWSL match, and the girls couldn’t be happier.

“They were both quite excited and jumped up and down. I got a big hug and thank you’s as well,” Lunn said. “They seem to enjoy [soccer] more than most sports. I’m hoping the Courage can continue to spark their interest.”

Red Stars taking NWSL to the next level 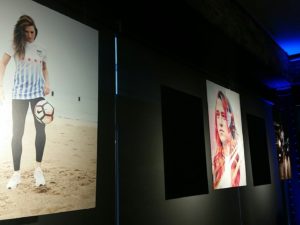 Some of the Red Stars newest promo pictures hang in The Annex at the jersey reveal party. (photo by Sandra Herrera)

For years now, many fans, media and even players have criticized the league for taking action that makes it look unprofessional. Christine Sinclair and Alex Morgan complained on Twitter about team hotels being infested with bed bugs back in 2015 (Morgan’s tweet has since been deleted), while Hope Solo took to her blog to write a scathing post showcasing some of the shortcomings of some league facilities. Many an article was written about the “Frontier Field Fiasco,” and people from all corners of the WoSo world were complaining about the lack of streaming information for the upcoming NWSL season.

These incidents can make the NWSL look rather bush league at times, but the Chicago Red Stars  are taking a more professional approach to 2017.

As I’ve previously discussed, the Red Stars have taken many steps during the past off-season to step up their game, both on the field and off. The My Kind of Town campaign and its successor, the #CRSNeverSleeps campaign, use images that are a mix of sports photography, player portraiture and art. All you have to do is scroll through Chicago’s Twitter account to see many examples of the newest #MKOT and #CRSNeverSleeps promo pictures. Even the new kit reveal photo looked like the product of a professional photo shoot.

Those same images were hung on the exposed brick walls inside The Annex, where the team had their new jersey reveal party earlier this week. Those photographs, the lighting, and the DJ spinning music in the background  made the gathering seem like a more professional event and occasion.

What Chicago has going on right now is exactly what the league needs to help it move into the big leagues.

Allison’s Friday Favorites will feature positive, encouraging or otherwise uplifting stories from around the world of WoSo every week.

NWSL team preview: North Carolina Courage: We don’t use the word
Week 1 Preview: The NWSL is Back