Midfielder Taylor Lytle played and started 18 matches for Sky Blue FC during her fourth year with the club. The 28-year old New Mexico native and Texas Tech alum is looking forward to consistency and competition this year as her club strives to not only start the season off strong, but to finish it there, too. I chatted with Taylor Lytle on the outlook for the 2017 NWSL season for Sky Blue FC, what the Lifetime deal means for the future of the sport, what athlete she looks up to most, and more!

Taylor Lytle: It’s been great so far. We have a lot of new players that have come in and they’re meshing with the older players–so I think everyone’s really playing good soccer right now and there’s a lot of competition going on. Preseason is always fun because we get to play the college teams and they play a little different than what we are used to, so anytime we get a chance to go against a good college team that presses us, that pushes us, since they’re out there trying to prove themselves, it’s great.

HK: Definitely. From your perspective, are there any pros/cons to going out against college teams in preseason compared to other NWSL clubs?

TL: I think there’s pros and cons to both of those. Obviously playing against NWSL teams before the season is definitely going to help you because they’re your competition throughout the season and you can see how each other play and get to know some of the players. But college teams, when you’re playing against them, they don’t care who you are or what you’ve done, they want to prove themselves. So, I do think it’s good for us to play against the college teams- we’ve played against teams like UNC, Penn State, St. John’s, and all of those teams are physical and definitely want to give us a good game.

HK: Has there been any change to head coach Christy Holly’s coaching style this year? Is there anything new that fans can expect to see in his second year?

TL: Not really. I think he is still a young coach and it’s his second season. He along with our assistant coach Paul [Greig] have come in with the mindset that last year was unfinished as we didn’t end where we wanted to end. So the mentality this year is to finish the season off strong. They brought in a bunch of good girls from the draft and from tryouts, and it’s just been very competitive. This year, that’s a really big thing for our team–trying to make each other stronger each day and more competitive throughout the season.

HK: Yes, that’s a great mindset to have. What are your goals this year as a team? I know you mentioned before feeling like last year fell short, so outside of winning an NWSL championship, which I think is likely part of everyone’s goals, is there anything more specific than that that you guys are looking to accomplish?

TL: Every year for us, I think teams look at us as the underdog. It’ll be about coming out and starting the season off strong, but also finishing off the season strong. It’s been a theme at Sky Blue where we always start off strong and we are playing good soccer and then we tend to fall apart. So, I think this year, we are all striving to put together a full season–winning those games that we lost by one goal in the 89th minute–being mentally clicked in for the whole season and mentally clicked in for the whole game.

HK: To further that, what are your goals going into this year?

TL: I want to grow off of last year. Every year has been a little different for me, which has been nice. I like change! But last year I finally felt like I was getting back to normal after the injury that I had [tibia fracture and lateral meniscus tear]. I am looking forward to going into this season strong and also to having all of our players in for the whole season this year, since it’s a little different without a World Cup or an Olympics going on. It will be nice to have the full team there and be able to play with them consistently. 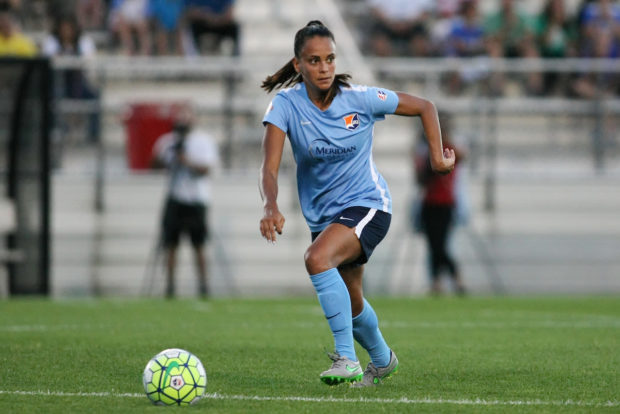 HK: What’s the mindset going into the season opener against Seattle? As well as hitting your first two games of the year on the road?

TL: We’re always excited going to the west coast and Seattle is always a tough game, not only because the players they have, but also because of the trip in general. Last year, we started off in Seattle and we were all excited to get the season going and I think this year, that’s exactly where we are at. I think we’re all finally coming together after this preseason which will be good for us going into Seattle

HK: Obviously the Lifetime deal has been in the headlines over the last few months. What are your thoughts on that? The buzz around women’s soccer right now is that there’s a lot of momentum behind the sport coming on the heels of this announcement.

{THE LOWDOWN:  Dan and some friends offer 2017 NWSL predictions}

TL: I am excited about it. As pro soccer players, we go around and we talk to people and they’re like, “Oh wow, that’s cool. You play professional soccer, but where can I watch it?” And now we get to say that we’re on TV–you can watch it on Lifetime. That’s an amazing thing. It goes to show how much the game has grown and how much support we have. Which for me, being there from the beginning of the NWSL, is amazing. It makes me excited to play soccer because I mean, we are on TV and I think that’s what every professional athlete wants, is to be on TV.

HK: Yeah for sure. It’s also huge for the next generation of girls soccer players.

TL: Yes, exactly. It’s something that’s going to grow the game even more. There’s going to be little girls at home that maybe aren’t into soccer but watch a game, and think “Wow, I want to be like them.” That’s what I did when I was younger watching the World Cup. We have so many wonderful people fighting for women’s soccer. It’s a big step.

HK: To jump into more about you as a person–why soccer? What got you started in the sport in the first place? Why have you continued to pursue it at the highest level?

TL: I have an older brother and I was the typical little sister. He’s two years older than me, and he started playing soccer. I don’t think I was ever interested in it until he started playing, and then I all of a sudden needed to do what he was doing. I started playing at a young age because of him. My parents have always been athletic and into sports and running, so it was an easy transition for me to jump into soccer. It was one of those sports for me that just clicked. Coming from New Mexico, it was a little harder getting to the next levels because it’s New Mexico. But I was thankful enough to be on a wonderful club team that traveled everywhere so that I was able to be seen and lead me to Texas Tech. My time there was awesome. I had a wonderful coach that pushed me to play my best and pushed me to go to try and play at the professional level. It had always been a dream of mine. I was around for the 99’ers, I was 10 when that was going on, so I was obsessed with soccer from that point–I wanted to be Mia Hamm, Michelle Akers, Brandi Chastain, and Shannon MacMillan and all these wonderful women.

HK: What’s the best part of being a pro athlete?

TL: I really enjoy being a part of something–being a part of a team and training every day and playing games. I still get excited going out to the soccer field. As an athlete you want to compete, and I think that’s where I am still at. It’s also nice to be part of paving the way for younger girls because we’re showing them that you can do whatever you want to do. The world is changing for women.

HK: Outside of soccer, what are some other things that you are into?

TL: I was an Animal Science major in college and I was pre-vet, so I am obsessed with animals. Our house is actually thinking of fostering animals this year, which would be awesome. Also, in my free time, I like to read a lot and do puzzles. It just eases your mind a little bit.

HK: Who would you say is the athlete that inspires you the most?

TL: My teammate Christie Rampone. I’ve been thankful to play with her for the last four seasons. She is an amazing woman, not just soccer-wise. Off the field, there is nothing that she can’t do. It’s been awesome to watch her juggle her life and also be able to play at such a high level- and she’s the best, so it’s actually been amazing. I have so much respect for her- so it’s nice to get to see her everyday.

<em>Thursday Q&A will feature a conversation with a different NWSL player or personality each week; find them all here</em>