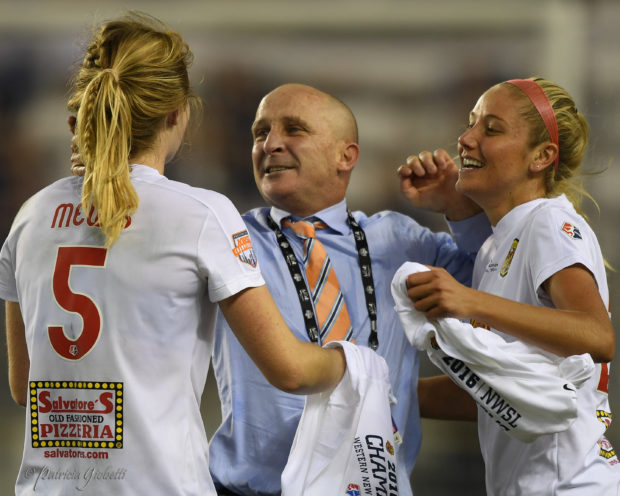 North Carolina head coach Paul Riley has received a fine and a two-game suspension for misconduct involving physical contact with game officials during last year’s semifinal against the Portland Thorns. Riley was ejected from that game, which the Flash would go on to win 4-3, and watched his team win the championship from a suite as he served the first game of the suspension.

Riley joined the Western New York Flash before the 2016 season after leaving the Portland Thorns and led the team to its first NWSL championship. The Liverpool native was named the official head coach of the Courage in January, bringing many of his staff with him, including assistant coach Scott Vallow, who ran the Flash bench during Riley’s previous suspensions.

Orlando head coach Tom Sermanni mentioned on today’s NWSL conference call with media members that new signing Marta is not likely to be available in Saturday’s season opener in Portland due to visa issues, although the rest of the current squad is available. The Brazilian forward made waves throughout the world of women’s soccer when it was announced last week that she was leaving successful Swedish club FC Rosengard for the sunny pitches of Orlando. The 5-time FIFA Women’s Player of the Year was drawn to the club by the roster, which includes her former teammates Ashlyn Harris, Alex Morgan, and Ali Krieger.

“It will be very doubtful that Marta will be here because of the visa process,” said Sermanni. “We’re kind of counting her out at this stage. At this moment in time everyone is healthy.”

Tobin Heath (white) will sit out the Thorns’ opener. (photo copyright EriMacPhoto for The Equalizer)

Both Portland and North Carolina will join Orlando in missing key pieces on opening weekend.

Thorns head coach Mark Parsons said on today’s media call that midfielder Tobin Heath will be out with the same minor injury that kept her off the roster of the recent USWNT friendlies. All other Thorns players, including Lindsey Horan who also missed the NT games, will be available.

Courage head coach Paul Riley also confirmed that captain Abby Erceg is out after suffering an injury in last month’s Algarve Cup, potentially her last appearance with the New Zealand National Team. In her stead, Riley might use new signee Yuri Kawamura. The Japanese international is a central defender by trade but could push into the midfield.

A new but familiar face is joining the Reign coaching staff in Steph Cox.

The Seattle Reign made a number of announcements at their kit reveal party yesterday. Former Reign and USWNT defender Stephanie Cox will return to the team as an assistant coach. Cox signed with the Reign in June 2013, helping lead them to back to back NWSL Shields and NWSL Championship appearances in 2014 and 2015, retiring from soccer at the end of the 2015 season. Cox also amassed nearly 100 caps for the USWNT, winning bronze and silver World Cup medals as well as Olympic gold in 2008.

The Reign have also picked up Michaela Hahn after the midfielder was waived by the North Carolina Courage. Hahn made thirteen appearances and scored one goal for the Western New York Flash during their championship run. The 2016 first round draft pick also won a championship with Florida State in 2014 and has appeared with the USWNT U-23 team. She will add depth to Seattle’s midfield after the departures of Keelin Winters and Kim Little and the season-ending injury to Diana Matheson.

“Michaela was someone we looked at in last year’s draft and then followed her career with the Flash,” said head coach Laura Harvey. “We have a position of need right now for her. We’re excited to see what she’ll bring to the team.”

Seattle, Washington, and Portland all announced their new kits ahead of Saturday’s season openers. Seattle and Portland’s are available for purchase immediately in their respective online stores.

Washington’s new kit is a departure from the chevron that they’ve rocked the previous two years but should be familiar to fans as they’ve taken the fade template formerly used by Houston, Chicago, and the USWNT, and made it their own, starting with white shoulders and fading to red.

Chicago’s secondary jersey was announced last week, but the club held a release party last night at The Annex. Members of the media, Red Stars staff, Annex collaborators, and local fans were invited to mingle with the players and, of course, see the new jersey up close and personal. This kit combines the fade with vertical stripes, starting white at the shoulders before fading into blue stripes after the famous four red stars at mid-chest.