Portland Thorns season preview: the best is yet to come 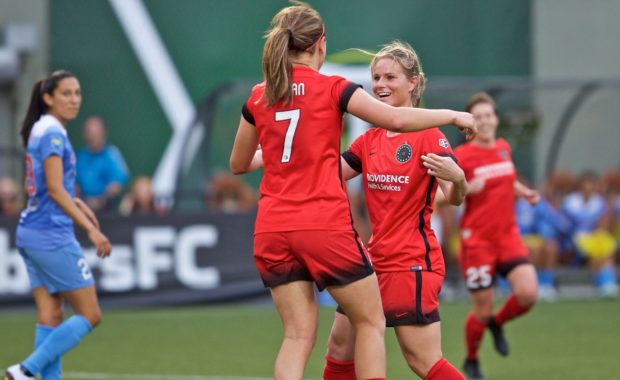 The Thorns won the NWSL Shield in 2016, but Mark Parsons believes the best is yet to come. (Photo Courtesy Portland Thorns FC)

Last year at this point, after the Thorns hired Mark Parsons away from the Washington Spirit, most pre-season analysis split down the middle: either the Thorns were the team to beat in 2016, or the team wouldn’t gel. The Thorns opted for option A, finishing first in the league and winning the NWSL Shield. Then Portland was one half of what is arguably the most exciting game ever played in the NWSL, their first home semifinal match in the league’s history, in which they were upset by the young Western New York Flash who went on to win the Championship.

Playoff disappointment aside, even with the NWSL Shield, the team did struggle with consistency in 2016, thanks in part to missing its large contingency of international players. The team did enjoy great success at home last season, to the point where Christine Sinclair called Providence Park a fortress during playoff prep last September. The Thorns also had the stingiest defense in the NWSL in 2016, thanks to their backline of Meghan Klingenberg, Emily Menges, Emily Sonnett, and Katherine Reynolds.

If anyone is expecting more from 2017 from the league as a whole, it’s Thorns head coach Mark Parsons. On Tuesday night during a phone interview, he said: “There’s a lot of quality. It’s going to be every single game. Last year, there’s no way we should have won the Shield. There is no way we should have won the Shield, and it’s almost like, because we won it—that was a freaking overachievement in every essence. Because we have a good roster; I think there are two, three other teams that have rosters as quality as ours, but we’re missing them for five-to-six games! There were teams like Seattle, that were specifically built to be the best in that year. Last year, we felt that every single game was so critical in us reaching our goal.”

So the difference in 2017? “This year, everyone’s here,” Parsons said, almost as if he couldn’t believe it himself, even as he acknowledged a few would miss a handful of games for Euros and other national team commitments. “The strength of everyone!”

Portland had a fairly quiet offseason compared to most of the other clubs, but for good reason. Getting the band back together makes plenty of sense after winning the regular season. Notably, starting goalkeeper Michelle Betos departed for Norway, and Adrianna Franch looks ready to take over that role.

To back up Franch, the Thorns traded two fourth-round picks in the 2018 Draft to the North Carolina Courage for Britt Eckerstrom. The Thorns also signed Australian forward Ashleigh Sykes, Golden Boot-winner in the W-League for the 2016-17 season with Canberra United. She won’t officially be added to the roster, however, until June 10th.

The Thorns top two draft picks in Los Angeles this year were Rachel Hill of UConn (14th overall), whom they almost immediately sent to Orlando in exchange for the Pride’s first-and fourth-round picks in 2018. Parsons also had the luxury of using the 18th overall pick on Savannah Jordan of the University of Florida. Jordan is currently playing in Scotland but the Thorns retain her rights. 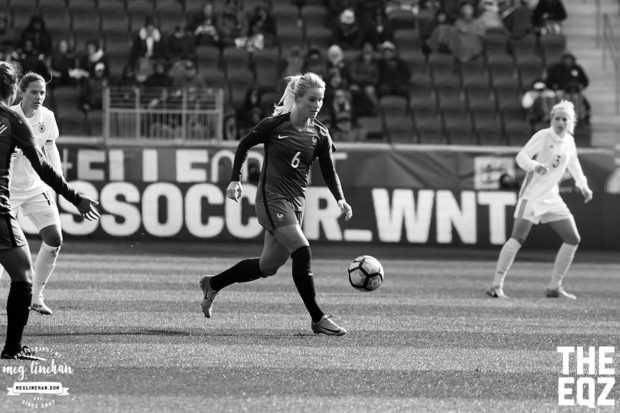 Amandine Henry, here playing for France, will have more time to put her stamp on the Thorns team this season. (MEG LINEHAN/Equalizer Soccer)

With a roster as stacked as this one, it is hard to single out focus on one player. There are plenty of offensive weapons, a backline entering its second year as a unit, and a mostly-known quantity stepping into the starting goalkeeper role. That said, the Thorns will certainly hope to get the most out of midfielder Amandine Henry, minus the couple of games she will miss this summer due to Euros. As much as Marta is the the big splashy signing of this offseason, Henry was last year’s most impressive acquisition for the league. It’s not that Henry didn’t pay off for the Thorns in 2016, but she stands to play a much larger role in their success for 2017.

(Writer’s note: I did actually select Tobin Heath as my leading candidate for MVP this season. She might have a slow start due to injury this year, but if she can replicate her 2016 performance across more games this year—minus that red card, of course—we might actually see two different names at the end of the year for the MVP and Golden Boot awards.)

Parsons and the Thorns didn’t need to mess with much. Even if, as Parsons says, the team outperformed what he was expecting last season, there’s plenty of reason to expect a return to the top four and playoffs in 2017. And that’s with the difficulty level getting cranked yet another notch in the National Women’s Soccer League.

The Thorns don’t exactly have an easy launch to season five. Open on national television against the Orlando Pride, then travel to North Carolina to face the Courage, then back home for a Week Three battle against Chicago. That’s not exactly an easy April. “And then after that is a rival game against Seattle,” Parsons said. “This reminds me of last year. I thought our opening schedule,” in which the Thorns opened at home, then did not return to Providence Park until Week Six, “was incredibly difficult. One: in opposition, but two: we were on the road.” He summed up how last year’s start with one word: “Brutal.”

{THE LOWDOWN:  Dan and a few staff members make their 2017 NWSL predictions}

As for this year? “Right now, it really doesn’t matter who’s coming up. It doesn’t matter if we’re home or away. It’s going be a struggle, it’s going to be hard, it’s going to be tough over these first three games.” And Parsons isn’t actually expecting much of that fortress-effect from Providence Park for the season kickoff on Saturday, either. “It’s one of those—it’s the other team’s first game, so they’re going to live off the excitement and the crowd. Sometimes it’s almost better to be on the road for that first game, because you keep the home game [for later], if that makes sense.”

Parsons is all Orlando, all the time, right now. “I haven’t even thought about North Carolina. I truly haven’t.”

Best case for Portland is easy:

Simple, right? If the team’s backline repeats its 2016 excellence, new No. 1 goalkeeper Franch can step in and hold the line, and the team finds the game-to-game groove they lacked in 2016? Well. Portland’s already going to be a game most dread on the schedule. But they also have a pretty good chance of achieving steps one through four on the to-do list above.

The Thorns are kicking off 2017 carrying a number of injuries. In a 24-game season where every point can and should count, missing key players early might put the team in a tough position as August and September roll around.

And as for updates on some of those injuries? Plenty of attention is on Tobin Heath and Lindsey Horan, but Dagny Brynjarsdottir, Katherine Reynolds, and Hayley Raso have all faced issues of their own this preseason. Parsons couldn’t offer much in the way of specifics, but he isn’t expecting a full roster on Saturday afternoon. “No updates. Wait and see. There’s no way every player’s going to be available Saturday, there’s just no way. We’ve got quite a lot in a gray area. We know where they’re at, we know their return to play, we know the steps, but if I took a judge today, I just can’t do it.

“We’re hopeful we can have most everyone available. We don’t know who won’t be yet, it depends on how they react each day.”