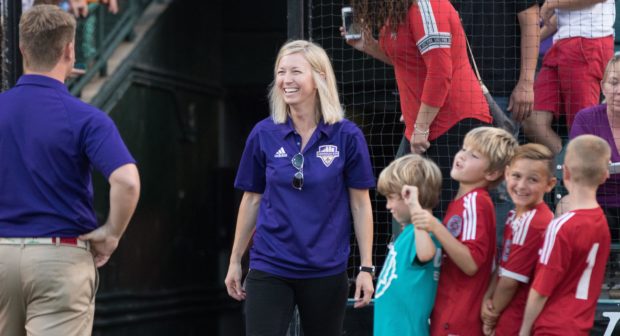 NWSL Managing Director of Operations Amanda Duffy, given a chance to address details of the league’s streaming platform with three days to go until the season starts, took a hard pass during a national conference call on Wednesday. Duffy, the voice of the league since the resignation of Commissioner Jeff Plush, said fans will neither be disappointed nor will they miss any games. She did not, though, reveal any details about who will stream the matches.

“We’ll have all of our games online, free of charge,” Duffy said as part of her opening remarks. Later when asked answer to a question, she replied, “We look forward to sharing more details obviously ahead of this weekend about where our fans will be able to go to watch those games.”

Duffy said she was aware of Tuesday night’s developments that pointed to the Verizon go90 app as the landing spot for streams. She did not expand when directly asked and all evidence of go90 partnering with NWSL was deleted late Tuesday and early Wednesday.

“I’m aware of what was on digital platforms and social media last night. Right now what I can confirm for our fans is that we will have all of our games available online.”

Pressed later as to the existence of a signed contract with a provider, Duffy again refused to offer a direct answer.

Fans have been clamoring, especially this week, as they wonder how to watch the opening weekend matches which begin with the Red Stars traveling to Houston on Saturday. Kickoff for that match is 2 p.m. EDT. The first NWSL on Lifetime match, Orlando at Portland, begins an hour later.

On the timing, Duffy said, “Is an ideal time a month ago, two  months ago? Maybe. The timing is probably not what we want. But from a net outlook on it, we know that we’re going to have all of our games available to our fans whether it’s through television or on a digital platform. We know that the production of these games will be at a higher level and higher quality than they have been in previous seasons through our partnership with Vista Worldlink.

Vista Worldlink is the Florida studio that will produce all NWSL broadcasts. With the exception of the Lifetime Game of the Week, all broadcasters will be based in the Vista studio.

Duffy added that all fans around the world would have free access to live streams. “They will be available internationally on nwslsoccer.com.” Archives and flexibility in terms of rewinding live streams was not addressed.

Sponsorship and expansion were also addressed with Duffy saying the league was anticipating adding new national sponsors or partners sometime later this year. The new partnership with A+E has helped.

“Certainly the partnership with A+E and Lifetime has opened up some conversations that previously we weren’t having. I do think it gives the sense and the presence of the stability of the league. Conversations with new potential partners are ongoing. There has been increased interest and increased conversation with potential sponsors and partners for NWSL and NWSL Media through the partnership that we’ve entered into with A+E and Lifetime.”

On expansion, Duffy reiterated the longstanding idea that talks are ongoing with several groups about starting NWSL teams. She stressed that finding the right groups to maintain league standards is vital.

Duffy also addressed the search for Plush’s replacement, which she said is ongoing. Thorns coach Mark Parsons then jumped in to interrupt, saying “Hashtag Duffy for commissioner.”

“Right now it’s an active search. In the time until that happens, I have taken a leadership role on everything that we’re doing in NWSL. It’s going to be a matter of finding the right person for this league.”