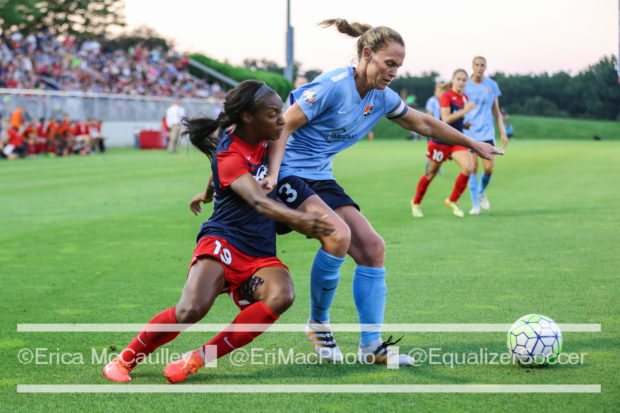 Christie Rampone returns for at least one more season with Sky Blue FC. (photo copyright EriMac Photo for The Equalizer)

Sky Blue underwent arguably the most tumultuous off-season of the league, starting with the departure of head coach Jim Gabarra for the Washington Spirit and ending with nine players from the 2015 squad, including a number of starters, leaving the team either to trades, expansion, retirement, injuries or personal reasons. After a lengthy search for a new head coach, assistant coach Christy Holly was promoted just days before the NWSL draft.

On opening day, a number of Holly’s new roster additions–six to be exact–were featured in Sky Blue’s starting XI against the defending-Shield winners, Seattle Reign. In a surprising turn of events, Sky Blue defeated the Reign, 2-1. The win would not be the first in a streak, though, as they would go on to win only one of their next five games.

Their luck began to shift on May 29, when Sky Blue drew the Red Stars on the road. Although not a win, the draw was a moral victory and set the team on a path to lose only one of the next seven matches. That one-loss stretch of the season was enough to see Sky Blue crack its way into the top four for a brief while during the summer. However, once their opponents returned to full-strength after the Olympics, Sky Blue would once again be at a disadvantage and would lose four of the last six matches of the season, falling out of playoff contention and to a disappointing (for them) seventh in the league.

Compared to previous seasons, very little roster turnover happened during the off-season. Only four players left before the start of preseason: CoCo Goodson and Shawna Gordon announced their retirements in October, the team waived Caroline Stanley on March 10, and after weeks of speculation that she wouldn’t return for 2017, Kristin Grubka was quietly left off Sky Blue’s (and all other teams’) preseason rosters.

“I feel this is the first year that we have a good core group from last year come back, which I think made a big difference come preseason ‘cause it wasn’t so much about, ‘Okay, what’s our style of play going to be and how are we going to do it?’” Maya Hayes, who has been with the team since 2014, said.

In January, Sky Blue once again drafted one of the best rookie classes in the league. Holly used his two first-round picks to select Kayla Mills and Mandy Freeman, versatile defenders who won the NCAA Championship with USC just the month prior. He then drafted Canadian-international goalkeeper Kailen Sheridan, who has since been allocated by the Canadian Soccer Association )CSA) and, as of this weekend, has accrued three caps with Canada’s national team. Holly also brought in Rutgers’ Madison Tiernan and Boston College’s McKenzie Meehan, both of whom can contribute to the Sky Blue attack.

The biggest news story coming out of New Jersey this off-season, though, was the signing of midfielder Daphne Corboz. A New Jersey native, Corboz was originally drafted in the third round of the 2015 NWSL College Draft but opted to finish college before signing with Manchester City Women the following summer.

“As a player she’s exceptionally gifted, and she can play a few different roles in our attacking setup,” Holly said. “Daph will give us something a little different that we didn’t have last year. So far already on the field, she’s shown that she has plenty of little tricks and flicks that will allow us to break teams down very quickly. She complements a lot of the players that we already have because she’s not a stereotypical North American player, and she has a very different viewpoint to how the game could be played.”

And finally, to the relief of many fans, was the return of Christie Rampone. Despite officially retiring from the USWNT, Rampone has returned for at least one more season with Sky Blue. She brings an unrivaled amount of experience and leadership to a young team, as well as a maternal instinct that helps the team’s family dynamic, part of what several players have attributed as a factor in last season’s success, thrive. 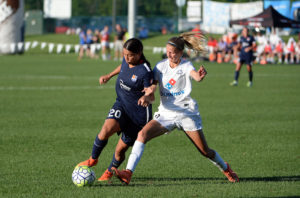 Since trading for her in 2014, Sky Blue has yet to have a healthy Sam Kerr for an entire season. The World Cup prevented her from joining the team until July 2015, and a severe ankle injury suffered at the end of the 2015/2016 W-League season sidelined her until June 2016. Despite missing a large chunk of both seasons with Sky Blue, the Australian-international forward led the team in scoring during that stretch with 11 goals in just 18 games. Kerr’s work rate is like few others’, and she has the skill and talent to create goal-scoring opportunities completely on her own.

“She’s in absolute top form at the moment, and it’s fun to watch,” Holly said. “She had a great season Down Under. I believe she finished second top goal scorer, possibly top goal scorer, down there. And it’s exciting to have her in the best possible condition.”

As Holly mentioned, Kerr spent the majority of the NWSL off-season playing in Australia’s W-League, helping her to stay match fit and giving her even more experience to bring back to New Jersey with her. With no major tournaments to pull her away from her club, Kerr has the potential to once again lead the team in goals and could be a serious contender for the league’s Golden Boot.

Sky Blue may be a relatively young, inexperienced team, but it’s a team that by no means lacks talent. The team proved last year that with hard work, determination and a little family spirit, it has the pieces to make a very successful team. If those pieces fall in place the way Holly wants them to, fans just might see Sky Blue once again defy odds and could even seen them in post-season play for the first time since 2013.

“It’s an exciting time for Sky Blue, but we can’t lose sight of where we are in the process and we have to live that day by day,” Holly said. “And ultimately when we can look back at the end of the season and we can ensure that there’s been was some growth each day and that we take care of the small details, we’re very confident we can have a successful season.”

Once again, Holly is relying on a relatively young team to carry him throughout the season. Of the 20 players named to the regular season roster, 10 are in either their first or second year of their professional careers, and that inexperience could cause the team to get off to a slow start. Depending on where Kelley O’Hara lines up–the team currently has her listed as a forward and Holly said said he wants to allow her to create as many goal-scoring opportunities as possible this season–inexperience could be an even bigger factor on defense as Rampone may be the only player in the team’s back five that has played more than one professional season. That’s the same as with last year’s back five when O’Hara was unavailable or pushed up into the attack, and that back line tied for most goals allowed in the league with 30. If defense can’t prevent the opposition from scoring, Sky Blue may find itself in a hole it can’t crawl back out of.

One of the biggest factors affecting Sky Blue’s performance last season was the health of its players. At any given time it seemed as though at least one of the team’s starting XI was sidelined with an injury, and Holly said a number of key players carried injuries through the season that should have sidelined them.

“It seemed like week in and week out, we would pick up something that would set a few players back,” Holly said. “You can’t compensate for different injuries that are collected through contact in various different games, but if we’re able to keep our best players fitter for longer, we think it’ll be a very successful season.

If the team can keep its key players healthy, if Holly continues to build upon the foundation he lay down last season, the team continues to focus on their team goals and the rookies perform at the same level as last season’s, the sky could be the limit for Sky Blue.